What happens to your brain?

Everyone forgets things once in a while, such as where you placed your keys, why you were going in a room to do something, and so forth. As you age, this is no different. The difference for the people with Alzheimer’s is that this happens with increasing frequency and is not a normal part of aging. How do you tell the difference between just being forgetful and the start of Alzheimer’s? Is there anything you can do to fix it? To prevent it? 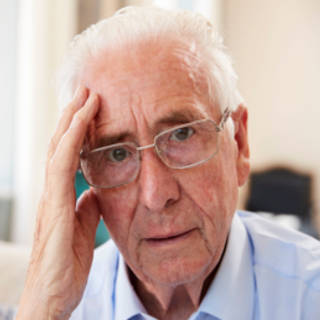 Alzheimer’s is a progressive disease that impacts memory and other important mental functions. It is the most common cause of dementia (a group brain disorders that is associated with the loss of intellectual and social skills). It was first identified by ancient Greek and Roman philosophers, but wasn’t given a specific name until 1901 when a German psychiatrist, Alois Alzheimer, identified the first case resulting in the disease being named after him. Alzheimer’s causes your brain cells to degenerate and eventually die. As this occurs over time, you end up with fewer and fewer brain cells. This also decreases the connections between the surviving brain cells. With the progression of brain cell death and lost connections, it actually leads to your brain shrinking. When looking under a microscope during post-mortem examination of people’s brains who have Alzheimer’s, it shows two significant abnormalities when compared to people who don’t have it. The first are clumps of protein, beta-amyloid, that damage and destroy brain cells in several ways. These are called plaques and one of the main things they do is to interfere with cell-to-cell communication. The actual cause of brain cell death isn’t known yet but the collection of these plaques on the outside of the cells is the main suspect. The other abnormality is the present of tangles. In order for the brain to function normally, it depends on internal support and a transport system that carries nutrients and other materials throughout long extensions. This is carried out by a protein called tau. In brains of people with Alzheimer’s, the threads of tau are found twisted in abnormal tangles inside the brain cells. This inhibits the transport system, which is thought to contribute to the destruction of brain cells.

The symptoms of Alzheimer’s start off subtly with increased forgetfulness and mild confusion. As it progresses, it takes away your ability to remember things at an increasing rate. Typically, recent events go first, but eventually, the person forgets important people in their lives and the ability how to care for themselves. Often, they undergo dramatic personality changes as well. The rate at which the symptoms progress varies from person to person and, sometimes, the person isn’t aware of the changes, but family and friends notice them. These changes can start out with the person forgetting that they have asked/stated something, so they keep repeating it. The person may routinely misplace things in illogical locations or get lost in familiar places. As the disease advances, they get to the point where they don’t remember entire conversations and appointments/events that they attended and can forget the names of family members and everyday objects. The ability to reason, process higher level of thinking, such as finances, or make decisions becomes impossible for them. Personality changes can include withdrawing away from others, mood swings, irritability/aggressiveness, wandering and delusions.

It is important to note that important skills that are learned early in life are not usually lost until the late stages of the disease. Some of these skills can include reading, hobbies/crafts that the person enjoys, dancing/singing and the ability to tell stories/reminisce about the past. It can be helpful to encourage the person to participate in these events as it can to allow them to have an increased quality of life by being successful at doing somethings as the ability to do other things decline. 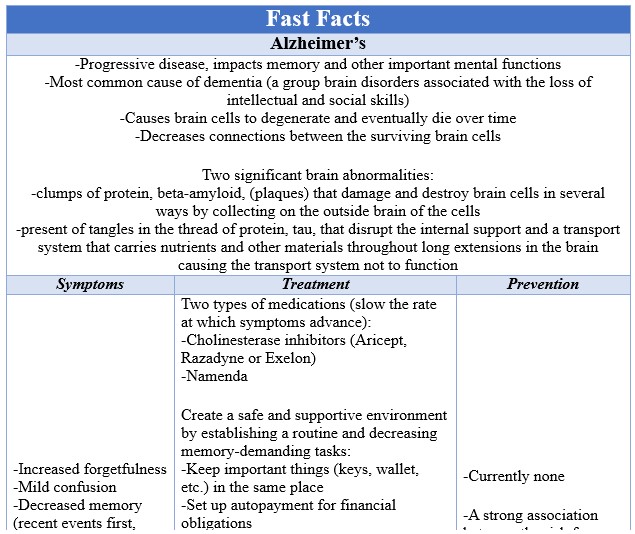 While there is a substantial amount of research being done to find a cure for Alzheimer’s, there isn’t one yet. There are two types of medications that have been found to slow the rate at which the symptoms advance. Cholinesterase inhibitors help to increase cell-to-cell communication by replacing a neurotransmitter (acetylcholine) that is missing from the brain of a person with Alzheimer’s. Some examples are Aricept, Razadyne or Exelon. The second medication is Namenda and it works in a different area of the brain cell communication network for those with moderate to severe Alzheimer’s. While these medicines can help delay the symptoms from getting more severe, they can’t prevent it.

The best thing to do for treatment is to create a safe and supportive environment. To do this, it is important to establish a routine and decrease memory-demanding tasks. This can include keeping important things (keys, wallet, etc.) in the same place, setting up autopayment for financial obligations and change medication doses to once daily, if possible. Also, schedule appointments for the same time on the same day of the week whenever possible. It is helpful to use a calendar to track their daily schedule. Encourage the person to carry a phone that has location capability in case they get lost. It is important to reduce clutter, especially loose rugs, install handrails and wear shoes with good traction to reduce the risk of falling. People with Alzheimer’s often find images in mirrors confusing or frightening, so removing most of the mirrors in their home can be essential in helping provide a calm and stable environment. By keeping photographs and other meaningful objects around the house and listening to the person talk about their memories and feelings, it helps them to cope with what is happening to them.

For caregivers of a person with Alzheimer’s, it is vital that you take care of yourself. You need to take a break daily to spend time with friends, take care of your own health, go to a support group or just have alone time. Learn as much as you can about the disease by researching information and talking to the person’s doctors. Ask for help from others when you need it and, if it is available, make use of the adult day care center.

There currently is no way to prevent getting Alzheimer’s. There seems to be a correlation between genetic, lifestyle and environmental factors that contribute to the likelihood of it developing. There is new research that seems to suggest that there is a strong association between the risk for heart disease and a risk for Alzheimer’s. Therefore, if you decrease your chances of getting heart disease, you are thought to decrease the probability of getting Alzheimer’s. This means not smoking, decreasing your exposure to secondhand smoke and managing your weight, blood pressure, cholesterol levels and Diabetes type 2, if you have any problems with these. It is essential to get plenty of exercise and a diet that includes fruits and vegetables. It has been found that people who are engaged in activities that are mentally and socially stimulating throughout their lives are less likely to have Alzheimer’s as they age. So, if there is an activity that you’ve always wanted to try, go do it. Spend time with friends and participate in events that allow you to interact with others.

Alzheimer’s is upsetting for the person experiencing and their loved ones. It is difficult to lose your independence and ability to remember things. Also, it is challenging to watch a loved one slowly loose the ability to be on their own and remember who you are. It is important to remember that your loved one isn’t acting this way on purpose and getting angry with them won’t help the situation. By being supportive and calm, you can help make this transition easier for them. If you have any questions or concerns, please speak with your doctor. If you would like further information, please visit the Alzheimer’s Association at https://www.alz.org/