Why should you be screened?

It seems that while cervical cancer is mentioned about a lot, most people don’t really understand it. Very few people know that there is a strong link between the human papillomavirus (HPV) and cervical cancer. This is why there has been so much focus on preventing the spread of HPV. So, what is cervical cancer? What can be done to prevent? 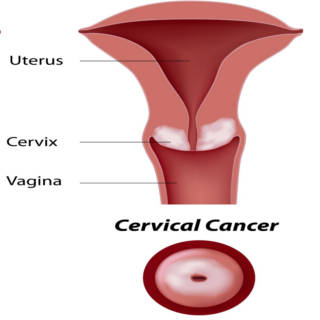 All cancers are the same in that the cells grow and multiple at a rate that is out of control and they don’t die like normal cells do. This results in a mass (tumor) being formed and, eventually, the cancer cells break off from the tumor and spread (metastasize) to other parts of the body. In cervical cancer, the location of these cells is in the cervix, which is the lower part of the uterus that connects to the vagina. The two main types, squamous cell carcinoma and adenocarcinoma, are named for the type of tissue involved. Occasionally, both types are present. While we don’t know the exact role of the human papillomavirus (HPV), we know that is a major component in the development of cervical cancer. For most women exposed to HPV, their body is able to fight off the virus and prevent it from doing harm, but for some women, the virus survives and some how alters the normal cells of the cervix causing them to become cancerous.

Unfortunately, there are no symptoms during the early stages of cervical cancer. When it gets to be more advanced, and harder to treat, the symptoms include vaginal bleeding after intercourse, between periods or after menopause, watery/bloody vaginal discharge that is heavy and has a foul odor, pelvic pain and pain during intercourse. Certain things can place you at a great risk for cervical cancer, like having many sexual partners, engaging in sexual activity at an early age, having another sexually transmitted infection, having a weakened immune system and smoking. 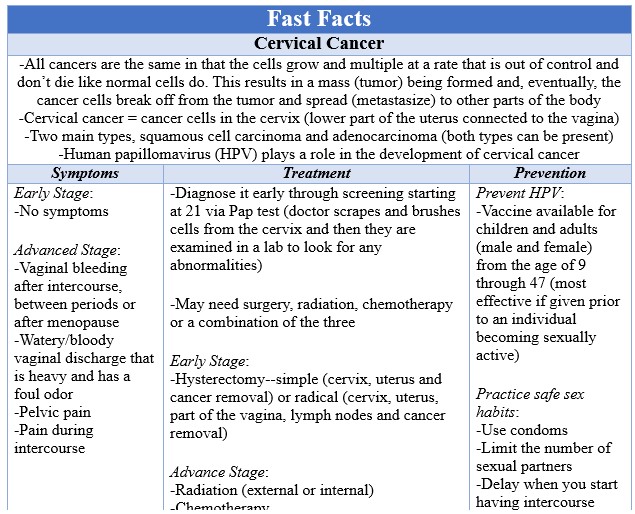 The best way to successfully treat cervical cancer is to diagnose it early. This is why it is recommended women start being screened at the age of 21. The most common way the screening is done is by doing a Pap test, which is where your doctor scrapes and brushes cells from the cervix and then they are examined in a lab to look for any abnormalities. If the findings are unclear, your doctor may recommend doing another type of test, such as HPV DNA test, punch biopsy, endocervical curettage, electrical wire loop sample or cone biopsy, to find an answer. If you do have cancer, depending a variety of factors, your doctor may recommend surgery, radiation, chemotherapy or a combination of the three. For early stage cervical cancer, your doctor may recommend a hysterectomy. Depending on the involvement of tissue, it may be simple (cervix, uterus and cancer removal) or radical (cervix, uterus, part of the vagina, lymph nodes and cancer removal). For later stage cancer, radiation can be used and it is given either externally or internally. With either, women who are premenopausal may become menopausal, so it is important to discuss preserving your eggs, if you would like to have children, before beginning treatment. Chemotherapy involves injecting medication into a vein and it travels to the cancer cells to kill them. During the process of going through any of the treatment options, it is important to address any pain and other symptoms that you experience. Your doctor will recommend the use of palliative care to manage this. Also, it is essential to have a good support network of family, friends and counselor.

The best way to prevent cervical cancer is to prevent HPV. Thankfully, there is a vaccine available to do just that. The vaccine is available for children and adults from the age of 9 through 47 (just recently expanded by the Food and Drug Administration). Both male and females can get the vaccine. While females are the ones who are affected by cervical cancer caused by HPV, males can be carriers of the virus. The vaccine is most effective if given prior to an individual becoming sexually active, but is still recommended for those who already are due to the severity of cervical cancer. After getting vaccinated, the next best thing you can do is practice safe sex habits, which means always using a condom, limiting the number of sexual partners you have and delaying when you start having intercourse. For women, it is vital that they have routine Pap tests starting at the age of 21.

Cervical cancer is a life-changing diagnosis. The good news is it can easily be prevented by managing exposure to the human papillomavirus (HPV) and through early detection. If you have any questions, please speak with your doctor. If you would like more information, please visit the American Cancer Society’s Cervical Cancer page at https://www.cancer.org/cancer/cervical-cancer.html