Are you at risk?

EBOLA…is everywhere in the news and should be taken seriously, but what is your real risk? What symptoms should you look for? Considering that about 90% of the people who contract it die, it is important to be aware of it but not to panic. 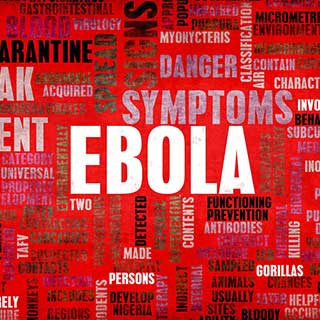 Definition
EBOLA is caused by a virus that is found in several African countries. There are five types of the virus, but only four of them infect humans. It was first discovered in 1976 near the Ebola River in the Democratic Republic of the Congo in Africa. Its natural reservoir host (where it comes from) is unknown, but thought to be most likely an animal (possibly bats). It has been found in bats and primates in the affected areas. Due to both of these being food sources for local populations, this how it was most likely spread to humans. Besides eating infected animal meat, EBOLA is spread through direct contact with blood/body fluids of an infected person, objects (needles/syringes) that have been contaminated, and possibly from contact with semen from a man who has recovered. The main cause for concern is that it effects the body’s ability to clot blood and destroys the body’s immune system putting you at risk for hemorrhaging and secondary infections. Symptoms can appear within 2 – 21 days, but most often between 8 – 10 days after infection and include fever, severe headache, muscle pain, weakness, fatigue, diarrhea, vomiting, abdominal pain and unexplained hemorrhage. Please see Fast Facts for an easy to read table of symptoms and treatment.

If you have traveled to an affected area or come into contact with a person who has and you are experiencing any of the aforementioned symptoms, you should isolate yourself from others and seek medical attention immediately. Due to the fact that it can take three days after symptoms start for the virus to show up in detectable levels in the blood, doctors will also try to rule out any other diseases as well. The blood work that is used to identify EBOLA is an antigen-capture enzyme-linked immunosorbent assay (ELISA) test, IgM ELISA, polymerase chain reaction (PCR), or virus isolation test. Once confirmed that someone has EBOLA, the next steps are to treat the symptoms as they appear. This will include intravenous (IV) fluids, balancing the body’s electrolytes, maintaining oxygen levels/blood pressure, transfusing blood and treating secondary infections. Whether or not a person recovers from the infection is dependent on the care they receive and each person’s immune system. When you recover from EBOLA, you will have antibodies, which provide resistance, or protection, from that particular strain of the virus for several years. Due to the nature of the disease, studies have been unable to determine the length of time the protection lasts or if it provides immunity to other strains of the virus. At this time, there are no current FDA-approved vaccines or medicines that treat EBOLA.

Prevention
The key to preventing contraction of EBOLA is directly related to careful hygiene. Avoid contact with bodily fluids, don’t handle items that came into contact with an infected person and avoid contact with bats or primates. If you travel to an area where EBOLA is present, monitor your health closely after returning. The thought of having such a serious disease can be scary, but in all likelihood, you will never be exposed. By taking precautions, you will further decrease your risk of contracting EBOLA. If you have any questions or are concerned, speak to your physician. If you would like more information, please visit the Center for Disease Control website at https://www.cdc.gov/vhf/ebola/index.html