What can you do?

When you think about food, you usually are thinking about what you are going to eat next or what you might need from the grocery store. Most of the time, none of us think about the amount of food that gets wasted daily. If you stop to think about it for a moment, how often do you throw away food because it is past the date that is stamped on it? What about all the food that this happens to at grocery stores? Is that the only area where food waste occurs? What can we do about creating less food waste? 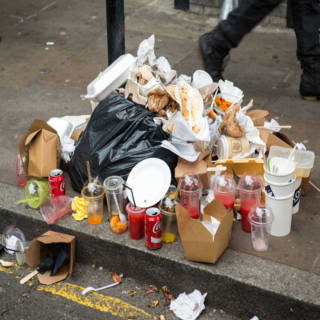 The most commonly accepted definition of food waste is food that was at one-point fit for human consumption and is discarded or lost uneaten due to spoilage or expiring. Unfortunately, this isn’t the true definition because food gets thrown away even if it isn’t spoiled or expired. It can occur at any stage of the food supply chain including production, processing, retailing or consumption. Between a third to half of all food produced yearly across the globe is wasted. For developing countries, it most often occurs during the production phase, whereas, in developed countries, like the United States, it is wasted during the consumption phase. When looking at the numbers for food waste, it counts food that is redirected to non-food chains (animal feed, compost or recovery of food to be used as bioenergy), but not “non-food parts” of animals and plants that are not fit for human consumption and must be discarded.

The food supply in the United States is the most diverse and abundant in the world. Food waste occurs right at the beginning of the food supply cycle…production. Due to pest infestations and severe weather, farmers lose almost 6 billion pounds of crops yearly. A process called culling, crops are selectively harvested in order to meet regulations and standards for quality and appearance, greatly impacts the amount of food wasted beyond the amount lost due to infestations and weather. The United States Department of Agriculture refers to this as the “individual removal of genetically undesirable, inferior, weak, diseased or infested plants from a planting in order to ensure the level of genetic purity or vigor of the crop.” This process happens at production, food processing, retail and consumption stages. In actuality, this means it is the removal and disposal of food that has a strange or imperfect appearance rather than just food that is spoiled or unsafe to eat. Retailers have strict cosmetic standards, so if produce is misshapen, the wrong color or bruised, it gets tossed. This usually occurs during the retailing stage and accounts for an additional 6 billion pounds of produce wasted each year in the United States.

In 2013, the National Resources Defense Council (NRDC) completed a study that found a leading contributor to food waste in America was the lack of regulation regarding food expiration dates and the confusion this causes among consumers. Since there is no real regulation, companies use terms like “best before,” “sell-by” or “use-by.” Consumers not understanding the difference or misreading the labels causes them to think that food is unsafe for consumption leading to the disposal of food that is most likely still safe to eat. This affects retailers as well because they get rid of large quantities of food that people won’t buy due to the date that is stamped on it drawing near or being past. Another element to the retailing portion is that they have contractual supply agreement with farmers for them to supply a certain amount of food to each store yearly. If a farmer fails to meet this requirement, then the contract gets canceled. In order to prevent this, farmers overproduce the amount of crop they actually need and the extra is just discarded.

The main reasons behind food waste in the United States are stocking too much food in stores, over-preparing food (not cooking it properly), leaving food on dishes after meals/unwilling to consume leftovers and decaying of prepared food after long or inappropriate storage. Restaurant contribution to food waste is increasing because the portion sizes they serve are enlarging, they misestimate of the amount of inventory they need and the lack of stringent food handling practices. When you combine all of these factors, it results in 35-103 million tons of food being wasted yearly in the United States. A 2014 National Geographic study estimates 30% ($162 billion value) of food is wasted each year. The NRDC estimates that Americans throw away up to 40% of food that is safe to eat. In either case, it is far too high of a percentage of food that gets thrown away. Food scraps accounts for about 19% of waste in landfills. This can impact our planet for years to come because as it breaks down, it releases methane gas. Methane gas spends less time in the atmosphere than carbon dioxide but it is much more efficient at keeping radiation in the atmosphere. This means that has 25 times the impact on climate change than carbon dioxide does over a 100-year period.

In order to curb the food waste, there are several things that we can do. Regarding not only food scraps, but all the excess from farmers overproducing, we should be making better use of composting to help decrease the amount of food waste that ends up in landfills. This process allows microorganisms (bacteria) to break down food waste into simple organic materials that can be used to provide nutrients to soil. This process is aerobic, meaning it doesn’t produce methane gas. Another potential solution is taking food scraps or food that is inedible for humans and using it as feed for animals. Not only does this reduce the amount of food that is wasted but the byproduct (animal waste) can be used as fertilizer. If we did a better job of separating food waste from other types of garbage, we could use the anaerobic, or methane gas producing, process to our advantage by having it take place in a controlled environment that allows us to harness the power of the gas production to use for energy production. This would not only help prevent methane gas from being released into the environment but provide an energy source. In order to accomplish this, we would need to develop a solution for keeping food waste separate from other types of waste. When you consider the fact that the majority of us already do this with recycling paper, plastic and other products, it doesn’t seem that it would be much more challenging to do the same in keeping food waste separate. In addition to these solutions, consumers can do their part by being more willing to accept and eat food that isn’t “normal.” This would help to decrease food waste in a variety of ways by not needing farmers to produce excess food to make up for the stuff that gets thrown away. It would also reduce the amount of food that gets thrown away by retailers. A good example of this is a company, Imperfect Produce, that sells less than ideal looking produce at discounted rates. So far, they, alone, have saved 7.6 million pounds of food, 379 million gallons of water and 26 million pounds of carbon dioxide. Imagine if this was the norm how much benefit that would provide. If stores took “expired” but still edible food and restaurants did the same with leftover food scraps and donated to food banks, this would also help to reduce waste. In addition, to accepting misshapen or abnormally colored produce, consumers can reduce the amount of food waste by planning their food shopping, avoiding wasteful spontaneous purchases, storing foods properly and actually being aware of the fact that just because a date is stamped on food doesn’t mean that the food spoils at that point. In order to help with that process, there needs to be a standardization of labeling for expiration dates to decrease the confusion surrounding the labeling system. To facilitate this change, widespread educational programs should be used since they have proven effective in the past. By using ad campaigns from advisory and environmental groups promoting the educational programs guidelines, it would encourage concentrated media attention on the issue.

Food waste is something that affects every single one of us. It is also something that each one of us has the ability to help reduce. If we all did our part, it would make a significant impact on the environment and everyone’s health. Food waste is completely preventable and we all need to do what we can to eliminate it.