Why does it matter?

When we think of health, it’s usually in relation to our own or someone we care about. Occasionally, when a larger scale event happens, such as a really bad flu season or the opioid epidemic, we think of it in broader terms. While this is good, we should be looking at it from an even wider perspective. The health status of people across the globe is extremely important here at home. Why is this the case? What things should we be doing to improve global health? 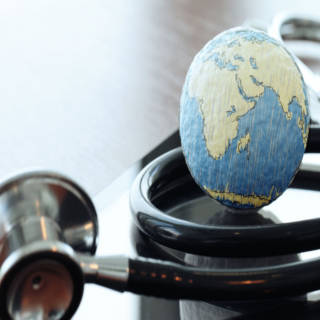 Many people don’t realize that the health of the Americans people and people around the world are inextricably linked. In order to understand this link, we need to know the two main focuses of global health. The first part is the study, research and practice of improving health with the goal being achievement of health equality for all people worldwide. The second part is the realization that health issues aren’t isolated to just one region, or country, but actually can, and frequently do, exceed national boundaries. This means the response to any large-scale health crisis needs governments to work together and for all actions taken to use global resources in order to shape the health of people worldwide. With the increase in the number of people traveling, disease threats can spread faster and more unpredictably than ever before. This is why epidemics, biological threats and drug-resistant (microbes that are unaffected by medications that once treated them) illnesses are easily crossing borders and ocean. It’s definitely humane to invest in global health, but this isn’t the only reason we should. Due to the fact that people and products move around more freely than ever before, it’s essential to treat diseases where they originate. Stopping health threats overseas before they spread is not only the right thing to do, but an effective, especially cost-effective, way to protect others. Without taking these steps, pandemic disease threats, especially if the responses from the countries of origin are ineffective, can have devastating impact on global public health and economy. We know that strong health systems are needed to combat and diminish global health threats. So, when countries and organizations help to strengthen developing countries’ healthcare systems, they are helping improve global health. Also, they are helping to build stronger economies and this contributes to greater stability and national security for these countries.

Besides affecting the health of a population, diseases can destabilize developing nations by harming economic productivity, which increases instability. As diseases make their way across a nation, it can significantly impact the workforce which can having devastating effects on the economy. When instability is present in developing nations, it often leads to poverty. When you have significant health issues and economic difficulties together, the result is mass migrations and civil unrest that requires international engagement. This is why having a strong healthcare system makes sure that a population is healthy and productive while allowing for epidemic monitoring and control.

Global health is playing an increasingly central role in both global security and the security of the United States population. At least once a week, a headline about the emergence or re-emergence of an infectious disease or other health threat somewhere in the world. The health of the American people can easily be affected by public health threats from around the world, like the Ebola outbreak (2014), H1N1 influenza (2009) and SARS epidemic (2003). Controlling threats like these in their country of origin limits helps to decrease their ability to spread and cause harm elsewhere. Many United States government agencies provide funding, human resources and technical support to global health initiatives and are cooperating with other countries to prioritize public health issues, prepare for and respond to emerging and pandemic diseases. One example of a program that has had profound impact is the President’s Emergency Plan for AIDS Relief (PEPFAR), which was created in 2003 by President George W. Bush. It was continued by President Obama and, currently, is estimated to be providing treatment to 3.8 million people who have HIV. With the United States government emphasizing collaboration and integrating effort, the fight against AIDS is making headway and this had led to a strengthening of global health overall. Another area that PEPFAR concentrates on is cervical cancer. Data shows that HIV positive women are five times more likely to develop cervical cancer. Also, it causes the most devastating effects on women in low- and middle-income countries. Since we have effective, affordable tools to both prevent and treat the disease, we need to share them with the countries who need them the most. We shouldn’t stop here, but continue to enhance our capacity to responding to infectious disease threats even more. The United States needs to take a leadership role in promoting a comprehensive, real-time infectious disease surveillance system. By rapidly identifying and controlling the emergence of infectious diseases, we are helping to prevent the international spread of disease, thus protecting the health of citizens across the globe, including the American people.

We aren’t the only country experimenting with innovative ways to lower costs and raise quality. Some of the innovations that we have come up with, such as specialist care or integrated electronic medical records, have been exported from here with great success. However, importing ideas from other countries is happening at a much slower pace. We should be taking information from countries that are showing better health outcomes than ours and using them to improve our public health initiatives. Unfortunately, part of the problem is that the amount of data we have in relation to global health isn’t enough. While it’s gradually improving, there’s still a long way to go. The main reason that we are seeing some improvement is because of the collaboration between science, tech and global health organizations. Through reinforcement of these partnerships, we will continue to make progress. One thing that we need to realize is that even if you have the best technology in the world, but you can’t get an individual or country to understand why they should be using it, then the technology is useless. Another part of challenge of treating global health issues is that our highly connected society has resulted in complex, international distribution chain with food and medical product supply chains stretching across the globe. This has led to an increase in international outbreaks due to foodborne infections, poor quality pharmaceuticals and contaminated consumer goods. These types of problems cannot only spread from country to country impacting the health of populations, but they also impact trade and travel. Also, the pharmaceutical industry, as a whole, can no longer view itself as being separate from the well-being of the rest of society. It shouldn’t matter where medications are manufactured because they should all need to meet the same high standards. The pharmaceutical companies shouldn’t be charging astronomical prices for medications since this puts many individuals and countries at a disadvantage.

Our world is precariously out of balance due to the gaps in health outcomes not only between countries, but within countries. Sadly, these gaps are more abundant now than at any other time in recent history. It is estimated that the difference in life expectancy between the richest and poorest countries is over 40 years. Globally, the rates of deaths from chronic diseases is growing while the number of deaths from infectious diseases is decreasing. The high health and economic costs of treating chronic disease have created an impending disaster. These diseases used to effect only affluent societies, but have now shifted to the developing world. About 80% of the global mortality rate is now concentrated in the developing world. Most healthcare systems in these areas are designed to manage infectious diseases, which are short-term. They are entirely unprepared to cope with the demands and costs of chronic diseases, which can be life-long care in some cases. Prevention is by far the better option. Unfortunately, the forces that drive the rise of chronic diseases, such as demographic ageing, rapid urbanization and the globalization of unhealthy lifestyles, are outside the power of the health sector. In order to fight the upsurge of these diseases, we need to focus on changing policies in other sectors, like food, agriculture and trade. Another thing that we need to be aware of and correct is that all global health problems are identified and dealt with from the perspective of industrialized countries. We can no longer neglect input from low and middle-income countries in terms of global health research and dialog. In order to truly solve global health problems, we need their perspectives since the majority of the problems currently arise there. A big part of the shift should be so that all countries are considered equally valuable in tackling health issues worldwide by which information is shared mutually among all partners.

With a vast number of urgent global health issues, we are just beginning to realize just how fragile our intertwined, modern world is. The climate is slowly warming, millions of preschoolers are obese or overweight and social fabrics that have been in place for many years are starting to collapse. The costs of a health event in one part of the world is usually profoundly unfair and can be highly contagious. Without well-function healthcare systems in place across the globe, the goal of preventing and controlling the spread of diseases cannot be reached and any progress we’ve made cannot be sustained. We also need to address the issue of the lack of data. By investing the time, money and effort into improving the amount of information we have regarding health issues in developing countries, we are able to provide significant public health benefits throughout the world and within the United States. In addition, we need to understand cultural and social particularities of the societies in developing countries to help encourage their buy-in into new health practices. A world isn’t stable or secure when the health of its populations is out of balance!