Should you be worried?

The pictures of the air pollution in India have been all over the news. You see people with masks covering their faces walking on streets so thick with smog that you can’t even see more than a few feet. What is the cause? How can it be fixed? Should we be worried about something similar happening in the United States? 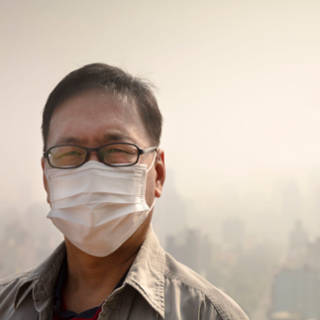 India’s air pollution problem has been steadily growing over the past 25 years as their economy has grown. The World Health Organization (WHO) has named Delhi the most polluted city in the world. There are several reasons there is so much air pollution in India. The first is residential biomass burning, which is when poor residents burn wood, crop residue or cow dung in order to heat their homes or cook their food. The second contributor is the rapid industrialization that has occurred. The third is the emissions from transport vehicles, especially those that are diesel. The fourth is the annual burning of crops at the onset of winter in northern India. All of this is permissible because there are no regulations or, if there are regulations, they aren’t enforced. Besides the sources of pollution, the other major contributing factors are the topography of the city of Delhi, which is a basin that traps the air, and the weather in the winter months, the temperature is cooler and air currents through the region are slower. This leads to the pollution from outside the city mixing with the pollution inside the city. The air flow doesn’t carry it away and the cooler temperatures cause the particles to be densely packed together causing the smog that is in the news pictures.

These pollution particles are incredibly harmful to your health. They are a fraction of the width of a human hair and enter your bloodstream through your lungs. They worsen cardiac disease, increase risk of stroke and heart failure and cause severe respiratory problems (asthma and pneumonia). Many citizens have complained of feeling nauseous all day, air tasting smoky, irritated throats that cause coughing and headaches and the air smelling like paint in some areas. Even with air filters in their homes, there is a faint, lingering chemical smell. Since they have no other choice, they go about their daily lives while wearing some sort of mask to protect their face. However, despite doing this, there has been a 20% increase in the number of patients with pollution-related illnesses being treated at hospitals this year causing a public health emergency. For a week this past November, the air pollution was so bad that Indian officials had to close 4,000 schools because it was unsafe to be outside. The pollution levels reached 30 times higher than what is considered safe by the WHO. Breathing this air was equivalent to smoking 50 cigarettes a day. The smog was so thick that drivers couldn’t see the car in front of them stopping, so there were multiple severe accidents.

The effects of the air pollution aren’t just felt in the short term, but significantly impacts the long term. From 1990 to 2015, the number of premature deaths due to air pollution has risen 50% in India. This means about 1.1 million people die of air pollution in India yearly. According to The Lancet Commission, in 2015 there were 9 million deaths world-wide from air pollution, of these 2.5 million were in India…the most in any single country. According to the Indian Institute of Technology Bombay and the Health Effects Institute, 75% of those deaths in 2015 occurred in rural areas. Even though the air pollution is spread evenly between rural and urban areas, with two-thirds of the country’s 1.3 billion people living in rural areas, more people die in rural areas. Besides the level of air pollution being so high, the other reasons for more people being affected or dying from it are because there has been a significant population growth and there is an aging populace of people who are naturally more susceptible to air pollution.

While air pollution is getting worse in India and other South Asia countries, it is getting better in the United States, Europe, Japan and China because their citizens demanded that something be done about the air pollution causing policy changes. The United States has experienced a 27% decline in the average annual exposure to fine particulate matter. Europe has had a smaller decline. Even with these declines, 88,000 Americans and 258,000 Europeans are at increased risk of premature deaths because of current particulate levels. We are doing better, but there is still more that we can do to improve these numbers. As far as India, they need to do a great deal more to protect their citizens. Their government authorities need to commit to aggressive energy efficiency programs that clamp down on biomass burning, crop burning, emissions from vehicles and emissions from industry. There are some laws in place, but there is not enough and those laws are not enforced. The city of Delhi is controlled by one government, whereas, the surrounding farmland is controlled by another. So, the two governments need to work collaboratively to fix the air pollution problem.

Air pollution is something that should be taken very seriously because its effects can be felt long after it is rectified. Unless steps are taken to change the current course of action in India, their problem is only going to get worse. For those of us in the United States and other countries who have taken steps to reduce our air pollution, we are moving in a positive direction. However, there is more that we can do to further decrease the amount of air pollution we have and this will become all the more important as time progresses. Air pollution affects everyone and it is up to all of us to correct it.