Some of the diseases mentioned above have been known about for a few hundred years, but others are just emerging into the spotlight. The common underlying factor is how they are transmitted to humans — mosquitoes! Yes, that annoying little insect at your backyard barbeque carries many different diseases. However, with all of the different kinds of mosquitoes that are found throughout the world, only a few are disease-bearing culprits. The key to protecting yourself is being informed about the causes, knowing what you can do to prevent the spread and deciding when to seek treatment if you think you might be infected. 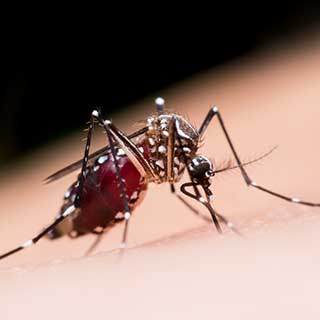 Mosquitoes are everywhere; however, the diseases they carry are specific to the type of mosquito that is found in a specific area. For instance, the West Nile virus is more common here in the United States versus Malaria in sub-Sahara Africa and Southeast Asia. Just because diseases are more prevalent in one area does not mean that they can’t be found outside that area. This is due to our highly mobile, global society. People are able to travel from one country to another with relative ease. Unfortunately, this means that we spread diseases to other areas quickly. Often, transmission is not from an infected person having contact with a non-infected person, but when an infected person is bitten by a mosquito that then bites a non-infected person and passes the disease along.

To prevent yourself from getting one of these diseases, there are several simple things that you can do:

Even after you’ve done everything that you can to prevent it, you can still get bitten by an infected mosquito. Then what? Most often, people don’t realize that they have been bitten until they already have symptoms of illness. In most of the diseases, the symptoms usually start appearing betwe 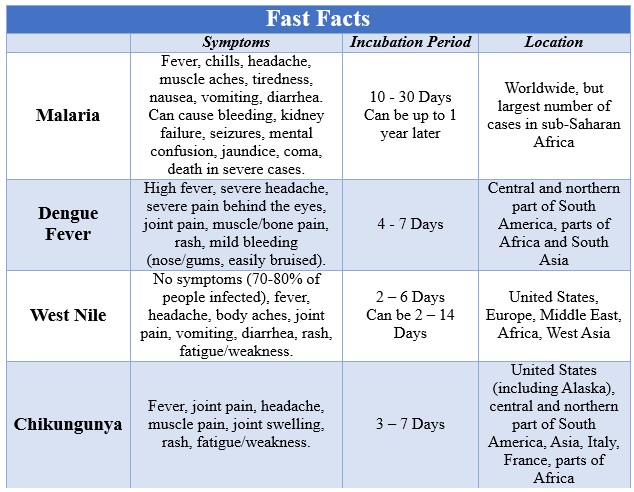 en 2-14 days after the bite. Malaria can take up to a month to first present symptoms. Due to the newness of the study of the Zika virus, that incubation period is unknown. (For a list of possible symptoms, specific incubation periods and the location that each disease is likely to be found, please refer to Fast Facts.) The treatment for most of the diseases is the same as for a common cold or the flu, aimed at the symptoms rather than trying to kill off the organisms causing the disease. This is because most of the diseases are caused by viruses, and antibiotics will not work as they are used to treat bacterial infections. The key to feeling better is to get plenty of rest, drink enough water to prevent dehydration, and take over-the-counter medicines to reduce fever and provide pain relief. A side note about Dengue Fever — if after the initial fever is gone, you have any persistent vomiting, severe abdominal pain and/or difficulty breathing, seek immediate medical treatment as this is an indication of a condition known as Dengue Hemorrhagic Fever and can be life-threatening.

The only disease that is treated differently is Malaria because it is caused by a parasite, which is different from a virus or bacteria. The anti-malarial medicines are very effective. Some of them are given prior to visiting an area with Malaria (very similar to a vaccine), and others are used to treat the disease once you have it. Each course of treatment for Malaria is different for each person because it is based upon the type of Malaria, the state of the person’s health prior to the infection, age and whether or not the person is pregnant.

While you are recovering from one of the diseases, stay away from areas that have mosquitoes where you could potentially be bitten again. This helps to reduce transmission to someone else from a mosquito that bites an infected person and then bites someone else, thereby giving them the disease. If you are already sick, this probably doesn’t seem like it should concern you, but you would not want to be the person who gets infected by that second mosquito.

Although research is being conducted to determine how to control the spread of the various diseases and as well as the mosquitos, it will be several years before any real progress is made. In the meantime, you must do what you can to protect yourself from being at risk. The best way to do that is to be fully informed and take appropriate action. For further information about any of the diseases mentioned, please visit the Center for Disease Control (CDC) website at www.cdc.gov.