It is worse for your health than you realize!

Pollution and ways to prevent it have been in the news for years. Typically, it makes headlines when some form of it affects the environment or human health. Most of us are aware of how bad pollution is for the environment, but we are probably not aware to the extent it affects our health. What exactly is pollution? Just how bad is it for human health? What are the current problems and what needs to be done to fix them? 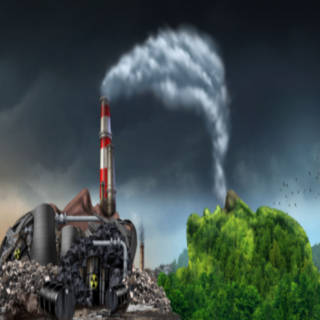 Pollution is considered unwanted, and often dangerous, substance that is released into the Earth’s environment as the outcome of human activity. It endangers human health and damages ecosystems. A recent study published by The Lancet Commission on Pollution and Health takes an in-depth look at the amount of pollution throughout the world and the direct/indirect impacts it is having on human health. The study has found that pollution is responsible for an estimated 9 million premature deaths in 2015 alone, or 16% of all deaths worldwide. This means that pollution is three times deadlier than AIDS, Tuberculosis and Malaria combined, making it the largest environmental cause of disease and premature death in the world today. In severely affected countries, it is responsible for more than 1 in 4 deaths and disproportionately kills the poor and vulnerable, especially the elderly and children. The majority of these deaths and the diseases related to pollution occur in lower to middle income countries with the largest number of these taking place in countries that are rapidly developing and industrializing. Due to more countries going through this process, pollution throughout the world is getting worse. What are the major contributing factors?

Some of the factors that are declining but still present are household air and water pollution. These are associated with profound poverty and traditional lifestyles. Some examples of these include the types of materials being used to cook food and lack of clean water and sanitation (2.5 billion people in the world lack access to a basic toilet and 1 billion people still practice defecating in the open). Even as improvements are made in combating traditional pollution as countries are industrializing, we are now faced with the rise of pollution coming from various industries, such as mining, electricity generation, mechanized agriculture and petroleum-powered vehicles. The chemicals from industries affects ambient air, water and soil. With more than 140,000 new chemicals and pesticides made since 1950 and less than half of them having undergone testing for safety or toxicity, we are just now beginning to see their effects on human health and the environment. The other realization that the chemicals and pesticides are dangerous is coming from the fact that higher income countries are imposing regulations on how to handle and dispose of these chemicals. So, the companies that deal with the hazardous chemicals are moving these jobs to lower/middle-income countries to avoid the regulations. Also, some countries will take the hazardous waste and ship it from higher income countries to lower/middle-income ones that do not have all of the regulations. The consequence of doing this is that pollution has become, more than ever, a planetary problem. The areas most affected by pollution are cities, especially those that are rapidly growing in industrializing countries. Cities contain 55% of the world’s population and they account for 85% of global economic activity. They concentrate people, energy consumption, construction activity, industry and traffic on a historically unmatched scale. Why has pollution gotten so out of hand?

There are several reasons as to why we don’t have better control over pollution. The unshakeable, but faulty, belief that pollution and disease are an unavoidable part of economic development. High-income and some middle-income countries have put into place legislation and issued regulations requiring clean air and water, establishing chemical safety policies and reducing their worst forms of pollutions. The data shows that this has improved overall health and people who live in these countries are living longer while there has been an increase in their Gross Domestic Product (GDP) by nearly 250%. Another reason pollution has gotten so bad is that it isn’t assigned to any specific part of governments because it falls under both environment and health. Due to this, all of the various elements are studied separately, so the full extent of pollution has not been able to be determined. Also, modern forms of pollution are not being addressed. A big contributing factor is that there is strong opposition from powerful vested interests who do not want to make changes to their industries because they feel it would be too costly. Most of these people do not take into account the economic costs of pollution (this is in part to lack of data since it is hard to track since there is no specific group compiling the information). What exactly are the costs of pollution?

The costs of pollution can be seen through individuals who become sick or die causing them to be unable to work. This directly affects the number of people available to be part of the labor force, decreases labor market productivity and, therefore, economic output. The costs are often overlooked and undercounted because the diseases that are associated with pollution usually non-communicable diseases that have long latency period over many years and affects large populations, so we are unable to accurately capture their impact by using standard economic indicators. Costs can include direct medical expenses, indirect health-related expenses (cost of special education for children who are affected, time lost from work/school), diminished economic productivity in people who have permanent physical damage and loss of output of products. It is estimated that in 2015, economic losses from pollution-related disease in upper middle/higher-income countries were over $53 billion. The economic costs of pollution not only affect productivity with regard to health concerns, but also related to ecosystem destruction and the loss of key species, such as pollinators and fish stocks, that are vital to life on Earth. What do we need to do to reduce the amount of pollution?

In order to treat the problem of pollution, we need to accurately understand what the problem is in relation to the effects on health. We should be examining all possible data for the frequency and severity of diseases attributed to different types of pollution. In addition, we need to determine the relative contribution of different exposure sources focusing on all types of pollution, not just the high-visibility sources. Next, we need to identify potential interventions that would provide the most benefit and their cost-effectiveness. We should start with programs that will not only yield a strong return on investment, but those that will be successful quickly to encourage public buy-in. To ensure that we are fixing the problem, we need to evaluate the efficacy of new programs, review existing programs and identify any gaps. In order to do this appropriately we need implement monitoring systems early in the process and use high quality metrics to track progress toward goals. It is important that the data is updated at regular intervals and timetables/deadlines should not only be set, but ambitious and attainable. To help encourage the success of the programs all relevant agencies need to be included in every step of the process. When looking at certain specific situations, it is clear that high income countries need to further reduce pollution (since certain interventions have been put into practice from the 1950s forward, progress has been made, but there is still more that can be done), decarbonize their economies and reduce the resources they use in achieving prosperity. Current and future interventions that have proven cost-effective in high and middle-income countries should be exported and adapted by cities and countries at every income level. Some strategies to decrease pollution are targeting reduction of emissions, transitioning to non-polluting renewable sources of energy, adopting non-polluting technologies for production/transportation and developing efficient, accessible and affordable public transportation systems. In order to support all of these vital changes, funding needs to be increased at every level of government and should come from the private sector as well. Clear and transparent laws and regulations must be established and impartially enforced to help regulate pollution. They need to be based on polluters-pay principle because this creates powerful incentives for companies to adopt new and more efficient production technologies. To help encourage companies in this transition, governments need to end the subsides to polluting industries, such as coal, oil, gas and chemical production. Accountability at every level is paramount. In addition to holding companies responsible, programs need to be continually assessed and held accountable to targets and deadlines using process metrics and outcome measures. Part of this process is a societal transition to circular economies that conserves and increases resources rather than taking and depleting them. This can be accomplished in a variety of ways, like creating durable, long-lasting products, reducing waste through large-scale recycling/reuse/repair efforts, replacing hazardous materials with safer alternatives, developing chemical management programs to test high portions of the 140,000 chemicals/pesticides for safety/toxicity and strictly enforcing pollution taxes.

Deeply interwoven with pollution are poverty, poor health and social injustice. This isn’t just from lacking money, but decreases the poor’s access to education, healthcare, nutrition and sanitation. In addition to the direct health concerns that the poor face, this impedes their ability to participate in legal/political processes and civil society. This barrier limits their ability to be able to make pollution and other things better for themselves and their countries. This is why it is important governments take a strong and positive attitude toward fixing pollution. The benefits of pollution control are numerous, some examples are a reducing household air pollution by decreasing the use of wood chips, coal, charcoal and cow dung and replacing them with liquefied petroleum gas, bio-gas and electricity that is produced by non-polluting, renewable energy sources, improving sanitation through providing clean water and toilets, decreasing greenhouse gas emissions/increase efficiency of electricity generation by shifting from coal-fired power plants to cleaner gas-fired and renewable energy sources (wind, tidal, geothermal, solar) plants and doing site remediation for contaminated areas helps to improve health of nearby residents.

Pollution cannot only be eliminated, but prevention can be highly cost-effective. With clearly articulated, data-driven strategy, proper leadership and the right resources, pollution can be controlled and pollution-related diseases prevented. Pollution is no longer just an isolated environmental issue, but a transcendent problem that affects the health and wellbeing of entire societies and our planet.