What is your body doing?

You’re sick and it doesn’t seem too bad at first, but all of sudden, it seems that your body isn’t fighting the infection as well as it normally does. What is going on? Why isn’t your body doing its job of fighting off the illness? Should you go to the doctor? 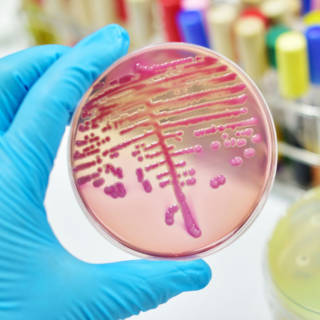 Sepsis is a complication that occurs when your body is fighting any infection (bacterial, viral or fungal). When your body is fighting an infection, it releases chemicals in your bloodstream to be able to do this. Sometimes, this release of chemicals causes an inflammatory response throughout your body that causes a cascade of changes that damage multiple organ systems which leads to them failing. It occurs in three stages: sepsis, severe sepsis and septic shock. In order to have sepsis, you have to have a probable or confirmed infection with at least two of the following: temperature >101°F or <98.6°F, heart rate > 90 and/or respiratory rate > 20. You are diagnosed with severe sepsis if you have you the aforementioned symptoms and have signs of organ failure, such as significant decreased urine output, sudden mental status changes, difficulty breathing, abdominal pain, abnormal heart pumping function and decreased platelet count. Septic shock is when you have signs of severe sepsis and an exceptionally low blood pressure that doesn’t respond to simple fluid replacement. The number of complications increase as severity of sepsis gets worse. Blood flow to vital organs (brain, heart and kidneys) becomes impaired. This decrease in blood flow can also result in blood clots forming anywhere in your body, including organs, arms, legs, fingers and toes, leading to organ failure and tissue death. 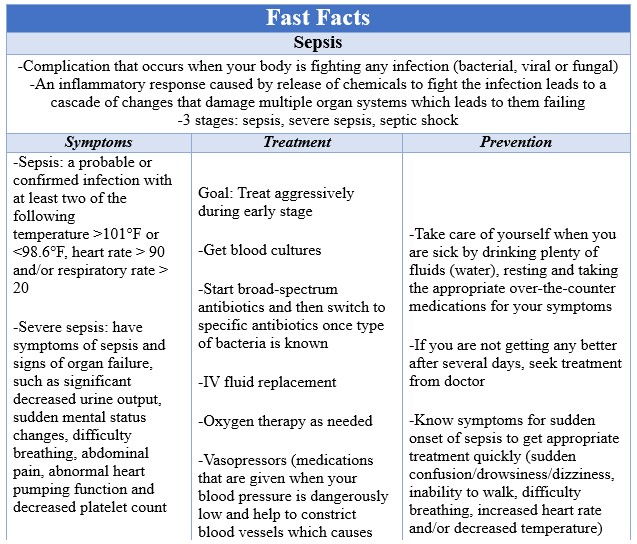 It is important to start treating sepsis while it is in the early stage and be aggressive with treatment. Typically, treatment involves getting blood cultures and starting broad-spectrum antibiotics right away. The cultures can take a few days to see what type of organism is causing the infection and to wait to start antibiotics until the results come in would be too late for most people. Once the culture results are back, your doctor will switch you to a more specific antibiotic that is designed to treat the particular organism that is causing the infection. During this waiting process, you will also be given large amounts of intravenous (IV) fluids in order to help replace the fluid your body is losing as it fights the infection. Your doctor will also be looking for the source of the infection in order to treat it. As sepsis proceeds to the more severe stages, you might need oxygen therapy to help you breathe in the form of being on a ventilator and a medicine from a group of medicines called vasopressors. These medications are given when your blood pressure is dangerously low and help to constrict blood vessels which causes your blood pressure to increase. Most people can recover from mild sepsis, but only about 50% of people recover from septic shock. Also, once you have an episode of severe sepsis, you are at higher risk for getting sepsis again with future infections. Unfortunately, the number of people affected by sepsis is on the rise. This is do to our aging population, increase in number of drug-resistant bacteria and more people living with weakened immune systems from living with cancer, HIV or on transplant drugs.

The key with prevention of sepsis is making sure to take care of yourself when you have an infection by drinking plenty of fluids (water), resting and taking the appropriate over-the-counter medications for your symptoms. If you are not getting any better after several days, you should seek treatment from your doctor. If you or a loved one is sick and experiences sudden confusion/drowsiness/dizziness, inability to walk, difficulty breathing, increased heart rate and/or decreased temperature, then you should go to the hospital immediately as this is a sign that sepsis is starting and needs immediate treatment. This is critical in preventing sepsis from reaching its severe stages.

Sepsis is nothing to mess around with and requires prompt treatment in order to decrease the chance of it being fatal. If you have any questions about sepsis, please speak with your doctor. If you would like more information, please visit the Center for Disease Control’s sepsis page at https://www.cdc.gov/sepsis/basic/index.html