Should you be concerned?

With the invention of the e-cigarette and the lack of appropriate regulation, it isn’t any wonder that it has become extremely popular, especially among teenagers. While there are plenty of facts about traditional cigarettes being harmful for your health, adults and teenagers alike still use them. Are e-cigarettes safer than traditional ones? Are teenagers at increased risk? Why isn’t there more regulation? 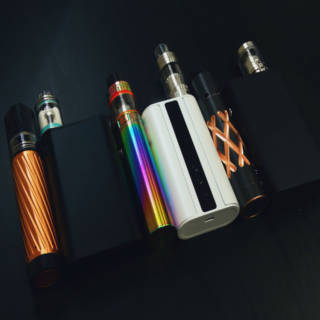 The e-cigarette was actually invented in 1963 by Herbert A. Gilbert. His idea was to have “a smokeless non-tobacco cigarette” that involved “replacing burning tobacco and paper with heated, moist, flavored air.” His device was designed to produce a flavored steam that did not contain nicotine. Unfortunately, it was ahead of its time because while there were prototypes, it received little attention due to smoking still being fashionable at that time. In 2013, Gilbert said that today’s electric cigarettes follow his initial basic design. The invention of the modern e-cigarette is credited to Hon Lik, a Chinese pharmacist and inventor, who wanted to quit smoking after his father, also a heavy smoker, died of lung cancer. In 2001, he thought of using a high frequency, piezoelectric ultrasound-emitting element to vaporize a pressurized jet of liquid containing nicotine, which results in a smoke-like vapor. He intended for his invention to be an alternative to smoking. By 2003, he registered a patent for the modern e-cigarette design and it was introduced to the Chinese domestic market in 2004. Many of these versions made their way to the United States, sold mostly over the internet. They officially entered the US market in 2007. Since then, it has become increasingly popular. This is especially true among middle and high school students. The reason for this is likely due to the availability of different flavors that, while denied by the manufactures, seem to be directly marketed towards teenagers. With over 7,000 flavors like cotton candy, chocolate chip cookie dough and sour gummy worms, it is easy to see the appeal it would have to them. Also, there a variety of different styles in e-cigarette devices making them tempting. A relatively new product, Juul, looks like a flash drive making it incredibly easy to conceal. In a 2016 report, the United States Surgeon General stated that between 2011-2015, there had been a 900% increase in e-cigarette use by high school students. According to the 2016 National Youth Tobacco Survey, 1.7 million high school students and 500,000 middle school students said that they had used an e-cigarette in the past 30 days. Also, according to the survey, more than 6 out of 10 American teenagers believe that it is just flavored water that is inside and e-cigarettes aren’t dangerous as long as they aren’t used every day. Is this actually the case?

The liquid that goes inside e-cigarettes is called e-liquid and it isn’t just water. There have been several studies done in recent years that prove this. Nicotine is in most of the them, even in small amounts in e-liquids that are suppose to be nicotine free. Nicotine is a neurotoxin that causes mental health and behavioral problems by altering the structure of your brain. This is especially true for teenagers since their brains are still growing and developing. This damage to the brain in teenagers can more easily lead to addiction to nicotine than it might in adults. Besides nicotine, a study done at Columbia University found that e-liquids also contain various metals in them, such as chromium, nickel, zinc and lead. While these initially started in small amounts, the heating of the e-liquid increased them significantly. A good example of this is that the level of lead had increased to a number 25 times higher after the e-liquid was warmed. It is vital to mention that there is no level of lead that is consider safe. Since there isn’t any regulation over the e-liquid, the formulation of chemicals varies from not only brand to brand, but flavor to flavor within the same brand.

Not only do all of these chemicals affect the person using the e-cigarette, but it exposes anyone who comes into contact with the exhaled aerosol in a way that is very similar to secondhand smoke of traditional cigarettes exposes others who come into contact with it. This is especially true for method of using the e-cigarettes called “dripping” because it produces a thicker cloud of vapor. In order to understand how dripping is different from regular e-cigarette use, it is essential to look at the normal process. A typical e-cigarette has a reservoir that the e-liquid gets put into. Inside the reservoir is a wick which automatically supplies the e-liquid to the heating coil within the device. This is accomplished without any intervention from the user. Dripping involves the user manually applying a few drops of the e-liquid straight on the exposed heating coil every few puffs. For those who use this method, they state that it gives stronger sensation in the throat making the flavors taste better and allows them to change flavors more frequently without wasting e-liquid. Research into dripping has shown that it produces higher temperatures of the heating coil than normal use of the e-cigarettes. These higher temperatures create larger emissions of harmful chemicals known as volatile aldehydes, such as formaldehyde and acrolein, that are known to cause cancer and chronic obstructive pulmonary disease (COPD). Another major concern is that increased possibility of absorption of nicotine through the skin because the e-liquids are being handled so frequently.

Currently, the only regulation that is in place is that people under the age of 18 are not allowed to purchase e-cigarettes or e-liquid. Obviously, teenagers are able to obtain them through a variety of methods that doesn’t involve them having to purchase either at a store. While Amazon and PayPal have restricted any sales of e-cigarettes on their websites, there are numerous others that offer them. This is in addition to the ways that have always been available for teenagers to obtain things that they legally cannot purchase themselves. Due to the lack of regulation, there are no laws that dictate how much nicotine or other chemicals are allowed in e-liquid. This is why there is so much variation in the content. Also, there is nothing that addresses the marketing practices of the manufacturers and how numerous flavors directly appeal to teenagers. While there isn’t as much research on e-cigarettes as there is on traditional cigarettes in relation to health detriments, the research that is available does not paint a favorable picture. We as a society need to do a better job of getting this information out the public in order to increase the level of awareness on the health impacts of e-cigarettes. This is vitally important in middle and high school settings in order to decrease the number of teenagers who start using e-cigarettes and helping those who are currently using to quit.

For more information about e-cigarettes and teenagers, please visit the US Surgeon General’s page regarding the topic at https://e-cigarettes.surgeongeneral.gov/default.htm