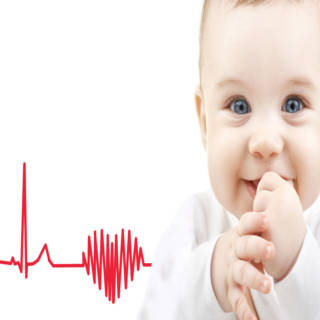 Wolff-Parkinson-White (WPW) Syndrome is the result an abnormal electrical pathway in your heart that is present from birth but not usually detected until years later. In order to understand what is going on inside a heart that has an extra electrical pathway, we need to look at the normal electrical pathway first. Your heart has four chambers with two on top (atria) and two on the bottom (ventricles). In order for them to pump blood throughout your body, they need to receive a signal to contract at the right time. This is under control of the electrical pathway of your heart that starts in the sinus node, which is located in your right atrium. Once the sinus node initiates the electrical process, it moves across the atria and signaling the muscles to contract, which sends the blood that is in them into the ventricles. The electrical signal reaches the atrioventricular (AV) node, which slows the impulse down before sending it the ventricles. This allows the ventricles to receive the blood from the atria before getting the signal to contract and sending that blood throughout your body. In WPW, there is an extra electrical pathway that allows the signal to bypass the AV node and results in the ventricles contracting too early. There are two main types of WPW. Looped electrical impulses go down either the normal or extra pathway and back up the other causing a condition called AV reentrant tachycardia and instructs the ventricles to contract rapidly, not allowing them enough time to fill with the appropriate amount of blood that needs to be distributed throughout your body. Disorganized electrical impulses don’t start correctly in the right atrium at the sinus node and move across the atria in an unsystematic way along the extra electrical pathway resulting in a heart rhythm called atrial fibrillation, which is when the atria contract too rapidly not allowing them to fill up with blood in between each contraction. This type can also cause the ventricles to contract too rapidly as well. These changes to heart rhythm are concerning and need to be corrected, but aren’t usually life-threatening.

It’s a rare condition that is more common in men. Even though individuals are born with it, they aren’t usually diagnosed until they are a teenager or in their 20s, which is when symptoms first appear. Symptoms include palpitations, dizziness, lightheadedness, shortness of breath, fainting, fatigue and anxiety. Often symptoms come on suddenly and last a few seconds, but, in some cases, can last several hours. Certain things, such as exercise, caffeine, stimulants and alcohol, can trigger an episode to occur. If you have the type that can cause atrial fibrillation, you might also have chest pain, chest tightness and difficulty breathing. Since WPW is a condition that is present at birth, sometimes infants can experience symptoms, like restlessness, irritability, rapid breathing, poor eating and ashen color. If you or a loved one has any of these symptoms, see a doctor. If you or a loved one are having a rapid or irregular heartbeat, difficulty breathing and/or chest pain, you should call 911. 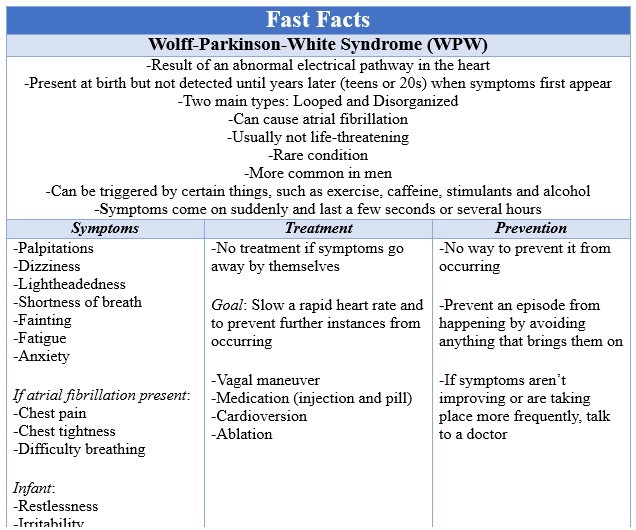 For some individuals, symptoms permanently go away on their own without any treatment. For others, they require some form of intervention depending on the severity and frequency of their episodes. The main goal of treatment is to slow a rapid heart rate and to prevent further instances from occurring. The initial thing that a doctor will want you to try is called a vagal maneuver. They might instruct you to cough, bear down like you’re having a bowel movement or put an ice pack on your face. All of these techniques stimulate your vagus nerve, which helps to regulate your heartbeat. If this doesn’t help, your doctor might need to give you an injection of an anti-arrhythmic medication to change your heart rhythm. If the injection works, they will probably prescribe an oral medication for you to take to help keep your heart rhythm under control. If the injection doesn’t work, your doctor might try a procedure called a cardioversion, which is where they send an electrical signal to your heart by placing patches on your chest and send a shock through them to your heart. This should return your heart to a normal rhythm. The only permanent solution is called an ablation and is when a catheter is inserted into one of your blood vessels and guided to your heart. Once in position, the tip of the catheter is heated so that it destroys the connection to the extra pathway.

Since WPW is a condition that you are born with, there isn’t a way to prevent it from happening. However, there are things that you can do to prevent an episode from transpiring. If you notice that an episode is brought on by a certain activity or substance, then do your best to avoid them. If your symptoms aren’t improving or are taking place more frequently, talk to your doctor about what you can do to prevent them.

Wolff-Parkinson-White Syndrome can be a scary thing to experience the first time it happens. By understanding the cause and how to prevent episodes, you’ll be able to have a healthy, normal life. If you have any questions or concerns about WPW, please speak with your doctor. If you would like more information, please visit the Cleveland Clinic’s WPW page at https://my.clevelandclinic.org/health/diseases/17643-wolff-parkinson-white-syndrome-wpw