How life-threatening is it?

Aneurysms aren’t something that we can see just by looking at ourselves in a mirror. Usually, you don’t have any symptoms until something goes catastrophically wrong that threatens your life. So, what is an aneurysm? How does it form? What can you do to treat them? How can you prevent one from occurring? 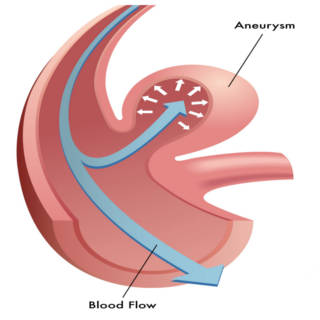 An aneurysm is when part of a blood vessel bulges or balloons outward because of a weakening in the wall of the blood vessel. Due to this, it can appear like a berry that is hanging on a stem. They usually form at forks or branches in arteries because these areas tend to be weaker. They can occur anywhere in your body. If it is on the main blood vessel (aorta) that carries blood from your heart to your body, it is called an aortic aneurysm. Depending on the location of the aneurysm on the aorta, it can be further classified, such as a thoracic aortic aneurysm if it is located in your chest or abdominal aortic aneurysm if it is located in your abdomen. Aneurysms can form in the blood vessels of your brain (cerebral aneurysms) or other parts of your body (peripheral aneurysms). The exact cause of aneurysms is unknown but certain things can increase your risk of developing them, such as aging, smoking, high blood pressure, drug abuse (especially cocaine), heavy alcohol consumption and head injuries. There are certain conditions that are present at birth that increase the chances of having aneurysms, like inherited connective tissue disorders, polycystic kidney disease, narrow aorta, arteriovenous malformation and family history of aneurysms.

Aneurysms don’t have symptoms unless they rupture, so someone may have one and not even know it. The smaller an aneurysm is the less likely it is to rupture. When an aneurysm ruptures, it is a life-threatening event. Depending on the location of the aneurysm, the symptoms when it ruptures can vary. If it is located in the body, the person will have a sudden onset of severe pain in the area of the aneurysm. Since the bleeding is internal, it will not necessarily be obvious what is going on, but the person will begin to display signs of shock as their body doesn’t have enough blood delivering oxygen throughout their body. These signs can include a rapid heartbeat, quick/shallow breathing, cool/clammy skin, low blood pressure, nausea/vomiting, feeling weak, fatigue, confusion, dizziness and little/no urine output. For individuals with a ruptured brain aneurysm, they can experience slightly different symptoms because the space inside your skull is not large, so the symptoms of shock don’t usually appear before the person starts to have serious complications. Some symptoms they could experience include a sudden/severe headache that is accompanied by nausea/vomiting, stiff neck, blurred/double vision, sensitivity to light and confusion. They also might have dropping eyelids and seizures. If a person has a sudden, severe headache but no other symptoms, they might have a leaking aneurysm, which needs immediate treatment because it often turns into a ruptured aneurysm. With brain aneurysms it is possible to have symptoms even if they haven’t ruptured because of the pressure the aneurysm puts on the surrounding tissue. Some possible symptoms include pain above/behind one eye, one pupil becomes dilated, vision changes to one eye and numbness to one side of the face. 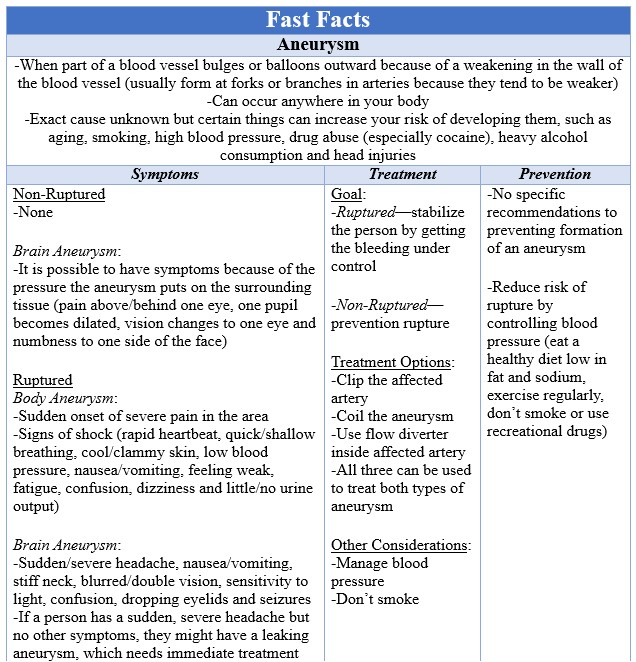 Aneurysm treatment is focused in two main areas. The first is what to do after a rupture and the second is preventing a rupture if an aneurysm is found prior to it rupturing. The primary goal of treating a ruptured aneurysm is to stabilize the person and get the bleeding under control to maintain this stabilization. One way to reduce the flow of blood coming from a ruptured aneurysm is to put a clip on the artery that is affected. In order to perform this procedure, a neurosurgeon has to remove part of your skull or a vascular surgeon has to cut you open in order to reach the affected blood vessel. Another option is endovascular coiling, which involves inserting a catheter (hollow, plastic tube) into an artery, usually in your groin, and then threading a guidewire through it and your body to where the aneurysm is located. Once they are in the right spot, the surgeon will place a soft platinum wire inside the aneurysm. The wire will coil and fill up the space inside the aneurysm causing blood to be diverted from it. A new option is a flow diverter. It is a tube-like stent that is placed inside the artery in the location of the aneurysm and helps to avert blood away from the ruptured aneurysm sac. All three of these options can also be used to treat an unruptured aneurysm in hopes of preventing a rupture. There are several factors that must be considered prior to proceeding with any procedure because sometimes the risks of performing the procedure outweigh the benefits. Some of these considerations are the size/location/appearance of the aneurysm, your age/overall health, family history of aneurysms and congenital conditions that could increase the chances of the aneurysm rupturing. It is essential to manage your blood pressure because when it is elevated, you are at increased risk for an aneurysm rupture. It is also vital to not smoke because this constricts your blood vessels, which increases your blood pressure.

Since the exact cause of aneurysm development is unknown, there aren’t any specific recommendations to prevent the formation of them. However, there are things that you can do to help reduce the chance of a rupture from occurring. This is especially important because most people don’t even know they have an aneurysm until it ruptures due to the lack of symptoms. The number one thing that you need to maintain control of is your blood pressure. When your pressure is elevated, it makes it easier for the weakened blood vessel wall of the aneurysm to rupture. There are several things that you can do to control your blood pressure, such as eating a healthy diet that is low in fat and sodium. Another key element is to exercise regularly because this helps your heart to function more effectively. It is vital to not smoke or use recreational drugs because they can significantly affect your blood pressure.

Aneurysms can be life threatening, but with quick and appropriate interventions, it is possible to recover from a rupture. If you have any questions or concerns, please speak with your doctor. If you would like more information, please visit the American Heart Association’s Aneurysm page at http://www.heart.org/en/health-topics/aortic-aneurysm/what-is-an-aneurysm