Why is it so different for each person?

Due to the rise in the number of children born with autism in recent years, more and more people are interacting with individuals who have some form of cognitive challenges. Given the broad range of symptoms that fall into the category of autism, it begs the question what exactly is it? How does it develop? Can it be prevented? What can you do to be supportive of individuals who have it? 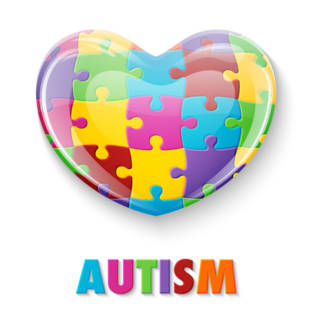 Autism is a condition that affects brain development and makes it challenging for a person to comprehend information and socialize with others. Some individuals also display repetitive behavior patterns. There isn’t a specific cause and given the wide range of symptoms, there are probably many causes. It is thought that genetics and environmental factors many play a key role. It is important to note that there has been extensive research completed since one particular study linked the cause of autism to childhood vaccinations. There has been no evidence to support this and that particular study has been found to have been completed without enough data to support the findings and, subsequently, the findings have been revoked. Not only are there a wide range of symptoms, but there are different levels of severity (low to high functioning). Both of these factors are why autism is referred to as a spectrum disorder. Several conditions fall under the broad title of Autism Spectrum Disorder and they include autism, Asperger’s syndrome, childhood disintegrative disorder and an unspecified form of pervasive developmental disorder. Boys are four times more likely than girls to be affected. Usually symptoms, such as reduced eye contact, lack of response to their name or indifference to caregivers, appear during the first year of life. Some children develop normally for their first year and then go through a period of regression between 18-24 months when symptoms of autism develop. For these children the symptoms are that they suddenly become withdrawn or aggressive and/or they lose language skills that they’ve already acquired.

The symptoms that are related to challenges with social interaction and communication can definitely be a challenge for the individual who experiences them and those who don’t understand how to interact with these individuals. Individuals on the spectrum often do not respond to their name and appear not to hear when someone directly speaks to them. Some individuals do not like being touched, so they don’t like being cuddled or held. Most prefer playing alone and will retreat into their own world. They will usually have poor eye contact and lack facial expressions. In regards to language, they either don’t speak or have delayed speech and can’t start a conversation or keep one going. Often their speech is in abnormal tone or rhythm, they don’t comprehend simple questions or directions, and while they can repeat words/phrases verbatim, they don’t understand what the words/phrases mean. They frequently don’t express emotions/feelings and are unaware of other people’s feelings. Social situations are handled inappropriately because they are often passive, aggressive or disruptive. They are very literal and cannot read nonverbal cues (body language) of others. When it comes to behavior patterns, these vary just as much as other symptoms. Some individuals will have a repetitive motion (rocking, spinning, hand flapping) that they do and they will sometimes engage in activities that could harm themselves, such as biting or head-banging. They like routines and can become distressed at a slightest change. Clumsiness, odd walking patterns or abnormal body language are common as coordination is difficult. Individuals on the spectrum are usually fascinated by the details of an object, but do not understand the overall purpose of it. Sometimes, this will result in them fixating on an object with abnormal intensity or focus. They usually don’t engage in make-believe play. Typically, they have sensitivities to light, sound or touch, but not to pain or temperature. These sensitivities can also be to textures as well, including clothing or food. 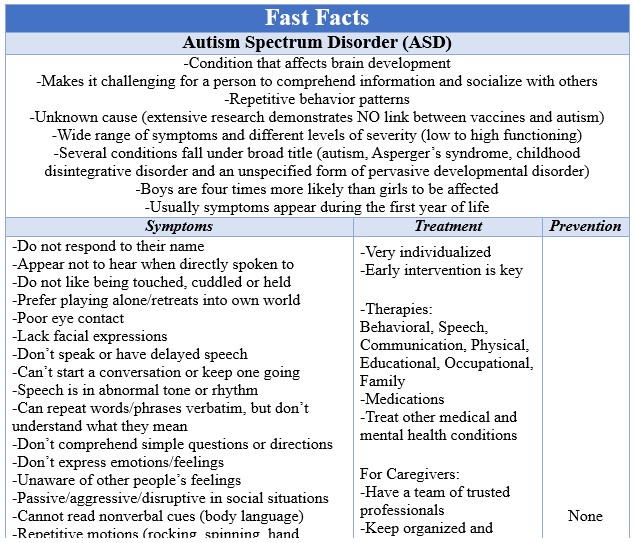 Treatment for conditions on the autism spectrum differ significantly for each person because the symptoms vary so greatly. Since there currently isn’t a cure, the main goal of treatment is to maximize the person’s ability to function by reducing symptoms while supporting development and learning. There are numerous types of therapy to help the person be able to do this, such as behavioral, communication, speech, physical, educational, occupational and family. In addition to therapy, medications are important to help regulate symptoms. However, this also differs for each person just as much as the symptoms do. What works for one person might not work for another. As children age, they will usually become more engaged with others and have fewer behavioral disturbances. Unfortunately, some don’t have any changes or their behaviors actually get worse, especially during the teenage years. Sometimes individuals on the spectrum have other medical conditions and/or mental health disorders that need to be treated in addition to their autism spectrum disorder. It is essential to plan for the future because even though most individuals continue to learn and compensate for their challenges, they will often need some level of support for their entire life.

For parents and caregivers to children and adults on the spectrum, it is key to have a team of trusted professionals that can provide assistance and guidance. Keeping organized and accurate records is an imperative part of this process to know what has been tried and what works in providing treatment to an individual and is vital to being able to ask the individual’s doctor about new technologies, therapies or medications. By learning as much as you can about the disorder and seeking out other families with children/adults on the spectrum, it can offer a means of support. It essential that you take time for yourself and other family members away from the individual on the spectrum. It can help to make the daily challenges easier to deal with when you’ve taken a break and gives other children some one-on-one time.

A diagnosis of a condition from the autism spectrum disorder group is life-changing for everyone who is in the individual’s life. It definitely presents challenges, but the focus should be on the triumphs that come from those challenges. Each person on the spectrum is unique, they just have a different way of expressing themselves. If you have any questions or concerns about autism spectrum disorder, please speak with your doctor. If you would like more information, please visit Autism Speaks at https://www.autismspeaks.org/