Why are they still around?

It wasn’t too long ago that you would see someone smoking inside a restaurant, store, or place of work. Since the damaging health effects of smoking have come to light and more people are aware of them, there have been numerous steps to regulate cigarettes, including banning the use of cigarettes in public places that expose non-smokers to the smoke from cigarettes. While this is definitely an improvement, why are they still being manufactured and sold? Will they ever go away? 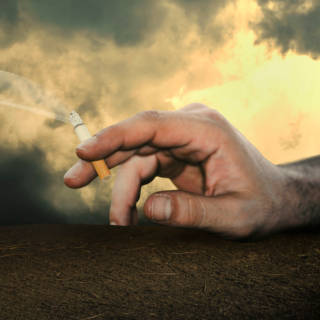 In order to objectively look at the problem with cigarette use, we need to look at the history of cigarettes first. Their earliest forms more closely resembled their predecessor, the cigar, and date back to the 9th century in Mexico and Central America. It was brought back to Spain and by the 17th century started to bear a similarity to the look of modern cigarettes. By 1830, it had crossed into France and received its current name. Cigarettes became increasingly popular with the English-speaking world during the Crimean War (1850s) when British troops began copying their Turkish comrades and Russian enemies and started smoking them. In the 1880s, the invention of a cigarette making machine allowed production to dramatically increase from 40,000 hand-rolled cigarettes a day to 4 million. The prevalent use of cigarettes in the Western world started in the middle of the 20th century. By 1965, about half the men and a third of the women in the United States smoked. Thankfully, more recently, due to the adverse health effects of cigarettes becoming more known, the numbers have declined to about 20% of our population smokes.

With the information that cigarettes are harmful to your health being common knowledge, this has led many countries to passing legislation regarding cigarettes. In the United States, this includes text-only health warnings on every package of cigarettes, you must be at least 18 years old to buy them and you can’t smoke in certain areas, such as restaurants, stores or places of work. Numerous countries have banned advertising and sponsorship of all tobacco products. Many have implemented the use of graphic images that depict what smoking can do to your body on the outside of the package. These images are considered more effective at communicating the dangers of cigarettes. Currently, the United States is not one of the countries that puts these images on the packages. Australia has taken it a step further and requires all cigarette packages to be a bland olive green with 75% coverage on the front and all of the back consisting of graphics images. The only difference is the name of the brand, but that is listed in a standard color, position, font size and style on the front. Since they are no longer allowed to advertise, many tobacco companies view their packaging as a form of advertisement, so in response to Australia’s law, several of them decided to sue, but the case was dismissed by the High Court of Australia and the new packaging took effect in the December 2012.

The primary psychoactive chemical in cigarettes is nicotine and it is highly addictive. There are over 7,000 chemical compounds in cigarette smoke and over 50 of those are known carcinogens (cancer causing agents). The effects of smoke on health are massive and over half the people who smoke cigarettes die of a disease caused by smoking. It leads to diseases of the heart, liver and lungs and increases risk for heart attacks, strokes, chronic obstructive pulmonary disease (COPD) and cancer. It causes peripheral vascular disease and high blood pressure. It is estimated that every cigarette that is smoked shortens a person’s life by 11 minutes and people who smoke usually live 14 years less than those who don’t. The World Health Organization (WHO) states that tobacco caused over 5 million deaths in 2004 and over 100 million during the 20th century. This means that tobacco is the single biggest cause of preventable deaths globally. It is important to note that using light or low-tar cigarettes doesn’t reduce health risks of smoking or decrease the exposure to nicotine, tar and carcinogens. The health effects don’t just stop with the people who smoke but extends those who are exposed to second-hand smoke (a mixture of smoke from the burning end of a cigarette and the smoke exhaled from smokers). It can linger in the air for hours after a cigarette has been extinguished. It is inhaled involuntarily and can lead to a wide variety of health problems, including cancer, asthma and respiratory infections. People who are exposed to second-hand smoke, and don’t smoke themselves, are 25-30% more likely to get heart disease and 20-30% more likely to get lung cancer. On average, second-hand smoke is thought to cause about 38,000 deaths each year. There is no level of second-hand smoke that is safe to be exposed to.

Cigarette butts (what is left after a person is done smoking it) can cause a variety of problems that are harmful to the environment. The first is the large amount of waste that it causes and the impact the release of all of the chemicals in these butts into the environment. They are the most common form of litter in the world. About 5.6 trillion cigarettes are smoked every year and about 4.5 trillion of those butts become litter. Most often, they end up in our water systems due to drainage ditches or are transported by rivers and other waterways into the ocean causing all of their chemicals into the water we drink or the ocean. If the butts don’t end up in the water, they leach those chemicals into the ground over the period it takes them to biodegrade (one month to fifteen years). This affects plants ability to grow and have well developed root systems. It affects animals, especially the risk of them eating the butts thinking it is food. Cigarette butts that aren’t completely out and are still smoldering have started fires in residential and rural areas that have resulted in major property damage, destruction of forests and deaths.

Since it is a well-known fact that cigarettes are not healthy and have copious damaging attributes, then why are they still being manufactured? There are several factors that play a role in this. One of them is the taxation of cigarettes. It is a significant source of tax revenue for many areas and has impeded the process in the past of getting rid of cigarettes. Generally, high prices for cigarettes prevent people from buying them and discourages smoking, but companies and governments that benefit from the taxes on cigarettes don’t want to encourage too much or too little taxation because they want people to buy more cigarettes. Another big factor is the consequences if the tobacco industry shutdown causing a significant number of people to lose their jobs and the impact this would have on the economy. An additional consideration is using the Prohibition of alcohol as an example and how well that turned out. Something very similar could happen again if cigarettes were made illegal. Since about 45 million Americans smoke and given all of these factors, no politician will risk alienating these people or risk the potential issue with the economy. This is why it is unlikely that cigarettes will ever be made illegal.

The best way to combat the use of cigarettes is to continue with has been proven to work in the past few decades and that is educating people about the harmful effects of smoking. It is key to provide encouragement and support for those who are ready to quit. Cigarettes only benefits the companies who make them and the governments who tax them. Hopefully, human and environmental health will outweigh those factors at some point in the future.