Does it really come from cows?

You might know that there was an outbreak of Creutzfeldt-Jakob disease in the 1990s because people ate contaminated beef. The disease progresses rapidly and is fatal, so many people were very concerned about it. It hasn’t been prevalent since then, so is it gone? Are there still ways to contract it? Have treatments been developed? 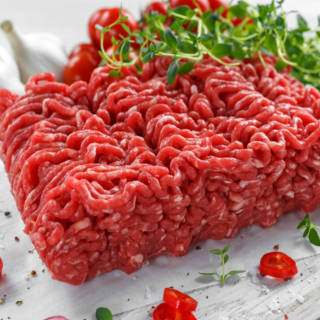 Creutzfeldt-Jakob Disease (CJD) is part of a group of human and animal diseases called transmissible spongiform encephalopathies (TSEs). They’re known as this because of the spongy holes (visible under a microscope) that occur in the affected brain tissue. The cause of these holes is irregular versions of a specific protein (prion). These proteins are in our body naturally and are usually harmless. The problem is when they become deformed.

CJD is a degenerative brain disorder that results in dementia and then death. It progresses rapidly, with most people succumbing within a year. Early symptoms are personality changes, memory loss, impaired thinking, blurred vision/blindness, insomnia, incoordination, difficulty speaking/swallowing, and sudden, jerky movements. Mental symptoms worsen to the point the person no longer recognizes family and friends nor care for themselves. Eventually, the individual ends up in a coma before dying.

There are three ways in which you can contract CJD. The first is sporadic because the condition develops for no apparent reason. This type usually appears around 60. The second is if you have a family history of the disorder, and it appears slightly earlier than the sporadic version. The third is through contamination from being exposed to infected human tissue during a medical procedure (known as iatrogenic CJD) or eating contaminated food (such as the cases in the 1990s—this is classified as variant CJD or vCJD). This form emerges during a person’s 20s. The good news is that all varieties are extremely rare, with only one to two cases per million people each year (globally). 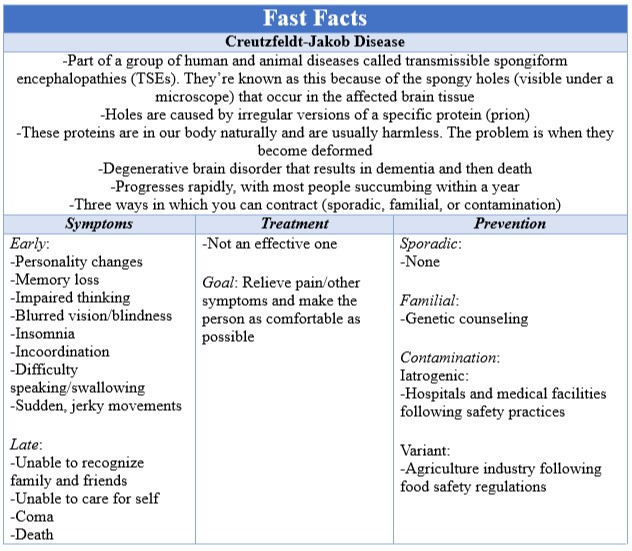 Unfortunately, there isn’t an effective treatment for Creutzfeldt-Jakob Disease. Many therapies have been tested, none of them have proven to be successful. Instead, the focus is on relieving pain and other symptoms while making the person as comfortable as possible.

When it comes to sporadic CJD, there isn’t a way to prevent it. If you have a family history of the condition, speaking to a genetic counselor can help you evaluate your risk level. To prevent iatrogenic CJD, hospitals and other medical institutions have policies in place. These usually include using artificial human growth hormone (not the kind derived from human pituitary glands), destroying surgical instruments used on the brain or nervous tissue of someone with known or suspected CJD, and using single-use kits for lumbar punctures. A person with possible exposure to CJD isn’t eligible to donate blood. This can include anyone who has a biological relative with familial CJD, received a dura mater brain graft, received cadaveric human growth hormone, spent at least three months in the United Kingdom from 1980 to 1996, spent five years or more in France or Ireland between 1980 and 2001, or received a blood transfusion in the U.K., France or Ireland since 1980.

Preventing vCJD is done by managing the food supply. The first step is having tight restrictions on cattle being imported from other countries. As far as cattle raised in the United States, there are restrictions on animal feed, surveillance/testing methods for tracking cattle health, strict procedures for dealing with sick animals, and regulations on which parts of cattle can be processed for food. As a result of these steps, the risk of getting vCJD in the US is extremely low.