Why is your child coughing?

There is no question that kids get sick. Sometimes, it’s just a sniffle or a stomach bug, but other times, it can be more serious. When you child has a cough, how do you determine when it’s critical? You’ve probably heard of croup, but what exactly is it? How is it treated? Is there a way to prevent it? 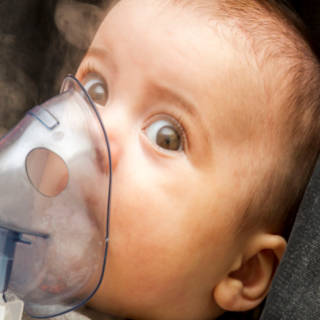 Croup is an infection of the upper airway that usually starts as a cold and is most often caused by the parainfluenza virus. It results in swelling to the area of the larynx (vocal chords), trachea (windpipe) and bronchi (bronchial tubes or upper part of the lungs). The swelling causes the space that air has to pass through to become narrowed. This means when you try to inhale, you might make a high-pitched whistling sound, known as stridor, and when you exhale, you cough, often it sounds like a seal barking. Children under the age of three are more likely to develop croup because their airway passages are naturally smaller. Crying, agitation and anxiety can increase coughing, which makes the inflammation worse.

Besides coughing, the most common symptoms are fever, hoarse voice and noisy/labored breathing. Typically, symptoms last for three to five days and most cases can be taken care of at home. However, some need to be treated at the hospital. If you notice your child making noisy, high-pitched breathing sounds (stridor) not just when inhaling, but exhaling, they begin drooling/having difficulty swallowing, they seem extremely anxious/agitated or fatigued/listless, they are breathing at a faster rate than normal, they are struggling to breathe or they have blue/grayish skin around their nose, mouth or fingernails (cyanosis), then you should call 911 immediately. 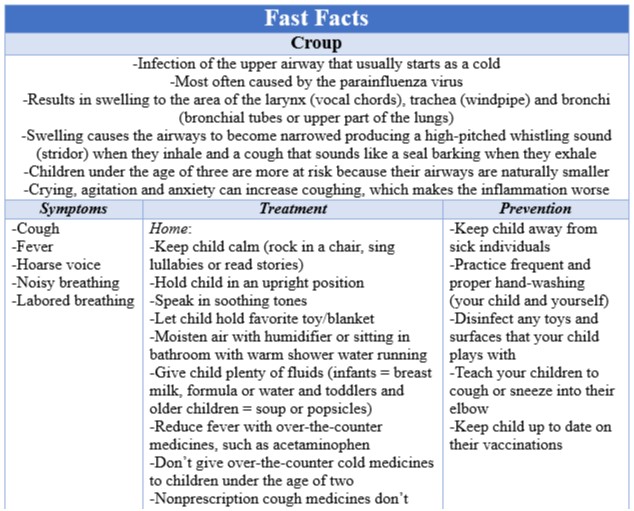 Since most cases of croup can be treated at home, the best thing to do is keep your child calm by comforting them. You can achieve this by holding them in a comfortable upright position, so it’s easier for them to breathe, while rocking in a chair, singing lullabies or reading stories. Always speak in soothing tones and let them hold their favorite toy or blanket. While there isn’t scientific evidence to back up the claims of using moist air to help your child’s breathing, many parents feel that it provides some relief. You can moisten the air they’re breathing by using a humidifier or running hot water in a shower to create steam and sit in the bathroom with your child so they can breathe the warm, moist air. It’s essential to encourage your child to drink fluids to prevent dehydration. Since their throat hurts from coughing, they are less likely to want to do this. For infants, it’s ok to give them breast milk, formula or water. For toddlers and older children, something warm, like soup, or cold, like popsicles, can lessen their discomfort. To reduce a fever, give over-the-counter medicines, such as acetaminophen. It’s key to note that over-the-counter cold medicines aren’t recommended for children under the age of two and, even if they were, nonprescription cough medicines don’t help with croup. Also, a key element to understand is that it’s common for your child to appear to be better during the day, but their symptoms come back or get worse at night. So, it might be a good idea to sleep in the same room as your child just in case their breathing becomes more difficult.

If your child’s symptoms continue beyond three to five days, you should see your child’s doctor. If they exhibit any of the life-threatening symptoms, you need to take them to the hospital immediately. For persistent croup symptoms, your child might need to take a steroid medication called glucocorticoid. This helps to reduce inflammation in their airway and starts working within six hours of taking it. Another type of steroid, dexamethasone, might be used because it can last for up to 72 hours. For emergent situations, your child will likely receive epinephrine because it’s a fast-acting medication. Unfortunately, its effects wear off quickly, so your child will likely receive it and one of the other medications that have a longer-lasting effect.

In order to prevent croup, it’s important to understand how your child might contract it. When an infected person coughs or sneezes, the virus is in the respiratory droplets that are released into the air. Your child might directly inhale these droplets if they are near the sick person. Also, the virus particles in these droplets can survive on toys and other surfaces. So, if your child touches one of these surfaces and then touches their eyes, nose or mouth, they are at increased risk for developing croup. The best way to prevent your child from contracting the virus is by not having them around sick individuals and practicing frequent and proper hand-washing. Handwashing is not only important for your child, but for you as well. This way you don’t touch a contaminated surface and then touch your child, thus passing the virus to them. Be sure to disinfect any toys and surfaces that your child plays with. Teach your children to cough or sneeze into their elbow so they don’t pass germs to others. While there isn’t a vaccination for the parainfluenza virus, keeping your child current on vaccinations is vital because they help protect your child from developing respiratory infections that can lead to croup.

When your child has croup, it can be a scary time because of how bad their breathing can sound. By doing what you can to prevent them from developing it and knowing what to look for in the event that their condition deteriorates, you’ll be able to provide your child with the best care they, when they need it. If you have any questions or concerns about croup, please speak with your child’s doctor. If you would like more information, please visit the American Academy of Pediatrics croup page at https://www.healthychildren.org/English/health-issues/conditions/chest-lungs/Pages/Croup-Treatment.aspx