Why are you having so much pain?

Every month when you have your menstrual cycle, you experience severe pain and heavy bleeding. It’s only been a few months, but you decide to see your doctor. She tells you that you might have endometriosis and suggests testing to confirm. What causes this to occur? How is it treated? 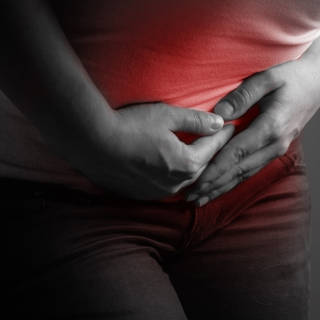 Endometriosis is when the tissue that usually lines the inside of your uterus (the endometrium) grows outside of it. Typically, it involves your ovaries, fallopian tubes, and the tissue lining your pelvis. Rarely it’ll travel to areas outside of your pelvis. During your menstrual cycle, endometrial tissue thickens, breaks down, and bleeds. The endometrial tissue that is outside of your uterus is no different. The problem is that it doesn’t have anywhere to exit your body, so it becomes trapped. The surrounding tissue becomes irritated and eventually develops scar tissue and adhesions (bands of fibrous tissue that result in pelvic tissue and organs sticking to each other). If your ovaries are involved, you can have cysts (endometriomas). Endometriosis usually develops several years after the onset of menstruation.

The exact cause of endometriosis is unknown, but several factors may contribute. Retrograde menstruation is when menstrual blood containing endometrial cells flows back through the fallopian tubes and into the pelvic cavity instead of out of the body. The cells stick to the pelvic walls and surfaces of pelvic organs, where they grow and continue to thicken and bleed throughout each menstrual cycle. Another possibility is the “induction theory,” where hormones or immune factors promote the transformation of peritoneal cells (cells that line the inner side of your abdomen) into endometrial-like cells. Since hormones play a significant role in the menstrual cycle, a possible cause is the transformation of embryonic cells into endometrial-like cell implants. This most often occurs during puberty. After a surgery, like a hysterectomy or C-section, endometrial cells may attach to a surgical incision. Another issue involves the blood vessels or tissue fluid (lymphatic) system, which may transport endometrial cells to other parts of the body. Sometimes, a problem with the immune system may make the body unable to recognize and destroy endometrial-like tissue growing outside the uterus.

The primary symptom of endometriosis is pelvic pain that’s usually associated with menstrual periods. Sometimes, the pain can be severe and start several days before and last several days into your menstrual cycle. Some individuals also have lower back and abdominal pain. It’s also common to have discomfort during or after sex. Occasionally, some women have pain with bowel movements and urination, but this usually occurs during menstruation. It’s important to note that pain severity isn’t a good indicator of the extent of your condition. Some women have mild endometriosis with severe pain; whereas, others have advanced endometriosis with minimal or no pain. Other symptoms women have include heavy menstrual periods, bleeding between periods, fatigue, bloating, constipation, diarrhea, and nausea. Given that the symptoms of endometriosis are similar to other conditions, it might be misdiagnosed as pelvic inflammatory disease (PID), ovarian cysts, or irritable bowel syndrome (IBS). Sometimes, IBS can accompany endometriosis. Symptoms may temporarily improve with pregnancy and may go away entirely with menopause, unless you’re taking estrogen.

Several things can increase your chances of developing endometriosis, such as never giving birth, starting your period at an early age, going through menopause at an older age, short menstrual cycles (less than 27 days), heavy menstrual periods that last longer than seven days, having higher levels of estrogen in your body or greater lifetime exposure to estrogen your body, low body mass index, one or more relatives (mother, aunt or sister) with endometriosis, any medical condition that prevents the passage of blood from the body during menstrual periods, and disorders of the reproductive tract. The main complication of endometriosis is impaired fertility. It’s estimated that 1/3 to ½ of women with the condition will have difficulty getting pregnant. There are many ways in which it impacts fertility. Another concern is ovarian cancer because it occurs at higher rates in women with endometriosis. 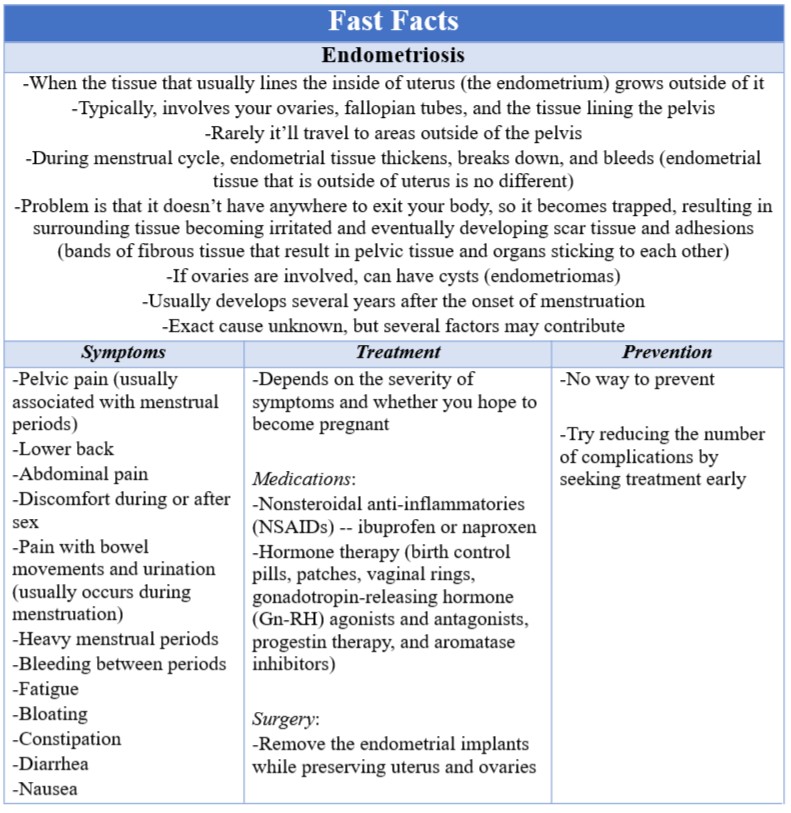 Endometriosis treatment depends on the severity of your symptoms and whether you hope to become pregnant. The two main options are medication or surgery. Most doctors will recommend conservative treatments first. The most common medicines used are over-the-counter nonsteroidal anti-inflammatories (NSAIDs), like ibuprofen or naproxen. These can help lessen painful menstrual cramps. You can also try warm baths or using a heating pad.

If you’re not trying to get pregnant, your doctor may also recommend hormone therapy. This may slow endometrial tissue growth and prevent new implants of endometrial tissue because it helps regulate the hormones that influence your menstrual cycle. Keep in mind that it’s not a permanent fix, and your symptoms might return if you stop treatment. The most common type of hormone therapy are birth control pills, patches, and vaginal rings. There are a couple of other options, like gonadotropin-releasing hormone (Gn-RH) agonists and antagonists, progestin therapy, and aromatase inhibitors. Gonadotropin-releasing hormone (Gn-RH) agonists and antagonists block the production of ovarian-stimulating hormones, lowering estrogen levels and preventing menstruation. This results in endometrial tissue shrinking. Essentially, these drugs create an artificial menopause, which means you might have side effects similar to menopause symptoms, like hot flashes, vaginal dryness, and bone loss. Taking a low dose of estrogen or progestin with these medicines may decrease the side effects. If you stop taking the medicine, menstrual periods and the ability to get pregnant return. Progestin therapy can include an intrauterine device, contraceptive implant, contraceptive injection, or pill. All of them can stop menstrual periods and the growth of endometrial implants. Aromatase inhibitors are a class of medicines designed to decrease the amount of estrogen in your body. Often, you take this with a progestin or combination hormonal contraceptive.

Surgery to remove the endometrial implants while preserving your uterus and ovaries is the typical recommendation, especially if you plan on becoming pregnant. It’s key to note that your endometriosis and pain may return. The gold standard of endometrial treatment was to remove the uterus (hysterectomy) and ovaries (oophorectomy). However, due to the side effects this can produce, many doctors now focus on removing only the endometrial tissue. When you have your ovaries removed, your body goes through menopause, and when this occurs earlier than usual, you’re at higher risk for cardiovascular diseases, certain metabolic conditions, and early death. If you have just your uterus removed, it can cause long-term health impacts as well. If you have trouble conceiving, your doctor may recommend seeing a fertility specialist.

Unfortunately, there’s no way to prevent endometriosis. The key is to try reducing the number of complications by seeking treatment early. It can be helpful to join a support group, either in your community or online, to connect with other women who are experiencing the same things you are.

Endometriosis can be incredibly painful. The good news is there are treatments available, so you don’t have to deal with it long-term. If you have any questions or concerns about endometriosis, please speak with your doctor. If you would like more information, please visit the Office on Women’s Health’s endometriosis page at https://www.womenshealth.gov/a-z-topics/endometriosis