Why is this one so bad?

When you read or listen to the news, there are numerous stories about the flu and the latest victims who have succumb to it. Unfortunately, this number keeps rising and it doesn’t look like this is going to change any time soon. Why is this year’s flu season so bad? Why are so many people dying? What can you do to protect yourself? 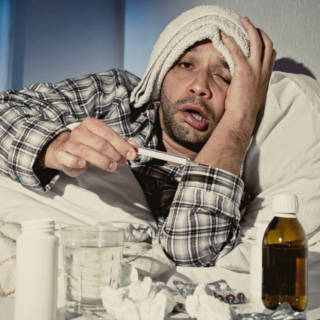 Most of us take for granted the seriousness of the flu. This is thanks to the advances we have made in medicine. With the availability of vaccines, it has helped to decrease the number of the people who get the flu. Also, in the past few years, the focus of who to vaccinate has shifted. Instead of just vaccinating those in high risk populations (young, elderly and immunocompromised individuals), it is now recommended that everyone gets a flu shot every year. This shift is due to the thought by protecting the entire population, we should be able to decrease the total number of cases (and deaths) from the flu. Every year scientists use data collected from the previous flu season and other parts of the globe that are in the middle of their flu season to help develop the flu vaccine for Americans. Based off the data, the flu vaccine is formulated to help protect against the strains of the virus that have been predominate. This year’s flu shot provides protection against four strains of the flu. Unfortunately, the strain (H3N2) that is principal one in the U.S. this year is not included in the vaccine. This doesn’t mean that you should get the flu shot though. You can still get the flu, even if you’ve had the shot, but by having the shot, if it doesn’t prevent you from getting sick, it can decrease the severity and duration of your symptoms. This is extremely important in relation to H3N2 because it is associated with more complications that causes increases in hospitalizations and deaths. H3N2 is an influenza A viral strain and while it has been the primary strain infecting people since the flu season started, new data is now showing that there also has been an increase in people infected by strains of influenza B. This is causing experts from the Center for Disease Control (CDC) to predict that the flu season is nowhere close to being over and, most likely, it is going to get worse. This is why they are still recommending that you get a flu shot if you haven’t already. Even if you have had the flu, they are recommending that you get the shot because it is possible to get the flu more than once.

According to the CDC, during the 2009 swine flu pandemic, 60.8 million Americans got sick with 274,304 being hospitalized and 12,469 dying. Currently, the number of Americans effected by this year’s flu is on pace to surpass those numbers. The data that we have so far shows since the beginning of October for 13 states (representing about 9% of the total U.S. population) that record information related to lab-confirmed influenza, show over 17,000 people have been hospitalized because of the flu. When you consider what the numbers would actually be if the data was able for the entire country, it is mind-boggling. In looking at each week since the start of the season, the death toll from the flu per week has increased every week. In the third week of 2018, over 4,000 deaths were caused by the flu or pneumonia (complication of the flu—person would need to be positive for the flu and then have pneumonia in order to be counted in this data set). The H3N2 is affecting not just the high-risk populations, but a significant amount of people who don’t fall into those categories. This season has hit the non-elderly population extremely hard causing a significant rise in the number of hospitalizations of this group. Also, the deaths of 63 children from the flu have been confirmed so far. So, with the numbers affected reaching those of pandemic levels, why isn’t it being called a pandemic? The reason for this is that the scientists studying the flu view the definition of the word pandemic as a strain of virus that people have no previous exposure and it starts killing people in large amounts. This was the case with both the swine and bird flus. This year the strains of the flu are not new and have affected people before, but the incidence of those who are impacted is higher than previous years.

Due to the number of people who are seeking treatment for the flu, hospitals and healthcare facilities are inundated with patients. There is are shortages of antiviral medications, like Tamiflu, due to the shear volume of people who are sick. Despite the number of people seeking treatment, the amount of people experiencing complications this year is extremely high. These complications are what is causing the majority of deaths. The complications are pneumonia and sepsis. When your body is fighting an infection, it is more susceptible to other things going wrong. If you are sick with flu, you should be aware of symptoms when it has transitioned to a complication of pneumonia or sepsis. Typically, you have a dry cough when you have the flu. If it changes to a wet cough where you are bringing up mucus when you cough, then you probably have pneumonia in addition to having the flu. If you have the flu and your temperature is above 101°F or below 98.6°F with a rapid heart (>90)/respiratory (>20) rate and confusion/inability to walk, then you probably have sepsis. If you have the flu and experience either of the changes in symptoms related to pneumonia or sepsis, you need immediate medical treatment. The best way to prevent these complications from occurring is by preventing yourself from getting the flu. The best way to prevent the flu, is to wash your hands thoroughly and frequently.

What is the best way to combat the flu in the future? There are several approaches that are being studied and tested. One is to research and develop a universal flu vaccine that provides longer immunity that yearly. The challenge with this is that the flu viral strains slightly change their genetic make-up frequently enough that this can make developing the best way to attack them difficult. Another area being researched is the development of a variety of antiviral medications that would be more effective than what we currently have on the market. Also, research is being done to look at destroying bacteria and virus before they ever a chance to enter our body by using certain wavelengths of ultraviolet (UV) light to remove them from surfaces and electrostatic filters to remove infectious particles from the air we breathe.

The flu is something that should be taken seriously and every effort made to prevent contraction of it. This includes getting vaccinated and practicing proper hand washing techniques. If you are sick, it is essential to get plenty of rest and stay home away from other people to reduce the risk of spreading the flu to them. There are strides being made to combat the flu more effectively, but we need all need to do our part in staying healthy.

If you would like to learn more about the flu, pneumonia and/or sepsis, please go to our articles: Cold vs Flu, Pneumonia vs Bronchitis and Sepsis.