How often does it occur?

Your son was just born, and the doctor says that his head looks larger than normal. You ask what that means. He says it could be a sign of Fragile X Syndrome. What is this condition? How could it affect your son? Is it treatable? 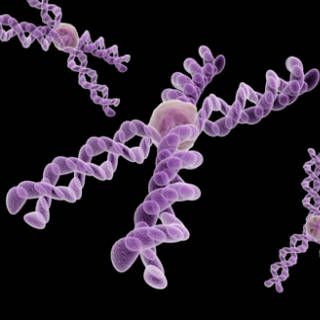 Fragile X Syndrome is a genetic condition where the affected individual makes too little or none of the FMR protein. This protein helps nerve cells communicate and is used by the brain to develop normally. The gene responsible for this protein is the FMR1 gene and is on the X chromosome. Due to this, boys are more likely to have Fragile X than girls since they have only one X chromosome. Girls can have one X chromosome with the defect, and the other be fine. Boys are also more likely to have more severe symptoms. Another issue with Fragile X is that these individuals have more copies than usual of a specific DNA segment (CGG). For most people, this segment repeats 5 – 40 times. In individuals with Fragile X, it repeats over 200 times. Research has shown that the more times it repeats, the worse the symptoms.

Some people inherit the disorder but don’t have symptoms; they’re known as carriers. They can pass the condition on to their children. A woman with the FMR1 gene mutation has a 50% chance of passing the disorder to any of her children. A man can only give the genetic modification to his daughters. It’s important to note that carriers are at risk for specific medical conditions. Women are more likely to experience premature menopause (meaning it starts before the age of 40). Men are at risk for Fragile X Tremor Ataxia Syndrome (FXTAS), a tremor that gets increasingly worse, leading to balance and walking issues. Men are also at an elevated risk for dementia.

The disorder has an impact on both physical and psychological health. Physical symptoms include a large head, a long, narrow face, large ears, a large forehead and chin, loose joints, flat feet, and enlarged testicles (after puberty). Psychological symptoms are trouble learning skills (ex. sitting, crawling, or walking), problems with language/speech, hand-flapping, not making eye contact, temper tantrums, poor impulse control, anxiety, extreme sensitivity to light/sound, hyperactivity, trouble paying attention, and aggressive/self-destructive behavior (boys). Typically, girls have milder symptoms, while boys are more likely to have learning and developmental delays. Some girls have issues getting pregnant when they’re an adult. The disorder can also cause complications like seizures, hearing problems, vision problems, or heart problems. 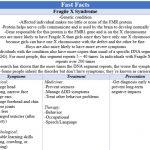 Fragile X treatment focuses on helping the individual learn more easily and manage behavior problems because there isn’t a cure for the disorder. The critical step is starting treatment as early as possible to limit the amount of negative impact. Medications can be used to prevent seizures, cope with ADD symptoms, and treat other behavioral problems. Various therapies, such as behavior therapy, occupational therapy, and speech/language therapy, can help the person develop the skills they need to function as independently as possible. Typically, children with the condition will need to receive special education to learn at their own pace. One national survey found that close to 44% of women and 9% of men with Fragile X obtain a high level of independence as adults.

If you know that you’re a carrier for the genetic mutation, other than not having biological children, there isn’t a way to prevent Fragile X Syndrome. However, given screening capabilities, you can determine if your unborn child potentially has the condition through prenatal testing, such as an amniocentesis or chorionic villus sampling (CVS). After a baby is born, blood tests can be done to see if they have the disorder. Sometimes, babies born with Fragile X don’t show signs until they get older and start having learning and behavior problems.

Fragile X Syndrome isn’t a common condition, so it’s often overwhelming if your child is diagnosed. With prompt diagnosis and initiation of treatment, they can have a good quality of life. If you have any questions or concerns about Fragile X Syndrome, please speak with your doctor. If you would like more information, please visit the National Fragile X Foundation at https://fragilex.org/