Where does it come from?

You spent a nice, relaxing weekend out on the lake swimming, kayaking, and fishing. A few days later, you notice that your stomach is cramping, and you have diarrhea that smells really bad. You go to the doctor, and she thinks that you might have a giardia infection. What caused it? How is it treated? Can you prevent it in the future? 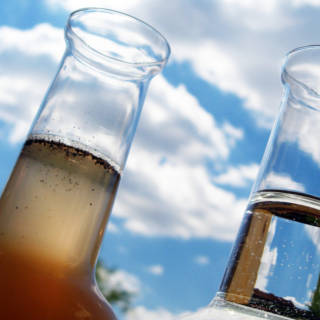 Giardia is a very common parasite that lives in the intestines of people and animals. It’s encased in hard shells (cysts), which allow them to survive outside the body for months. Once it enters a new host, the cysts dissolve, and the parasites are released. Typically, infection occurs by swallowing contaminated water. Giardia can be found in lakes, ponds, rivers, and streams worldwide. It’s also found in public water supplies, wells, cisterns, swimming pools, water parks, and spas. The parasite can be passed via food if a food handler has the condition and doesn’t wash their hands thoroughly or if raw produce is irrigated or washed with contaminated water. It can also be spread through person-to-person contact, such as when parents or childcare workers change a child’s diaper or through anal sex.

Some individuals develop a giardia infection but never get symptoms. However, they can still pass the parasite to others. If symptoms are present, they usually appear one to three weeks after exposure and last two to six weeks but can last longer or recur. The main sign is watery, sometimes foul-smelling diarrhea that alternates with soft, greasy stools. Other symptoms include fatigue, stomach cramps/bloating, gas, nausea, and weight loss. 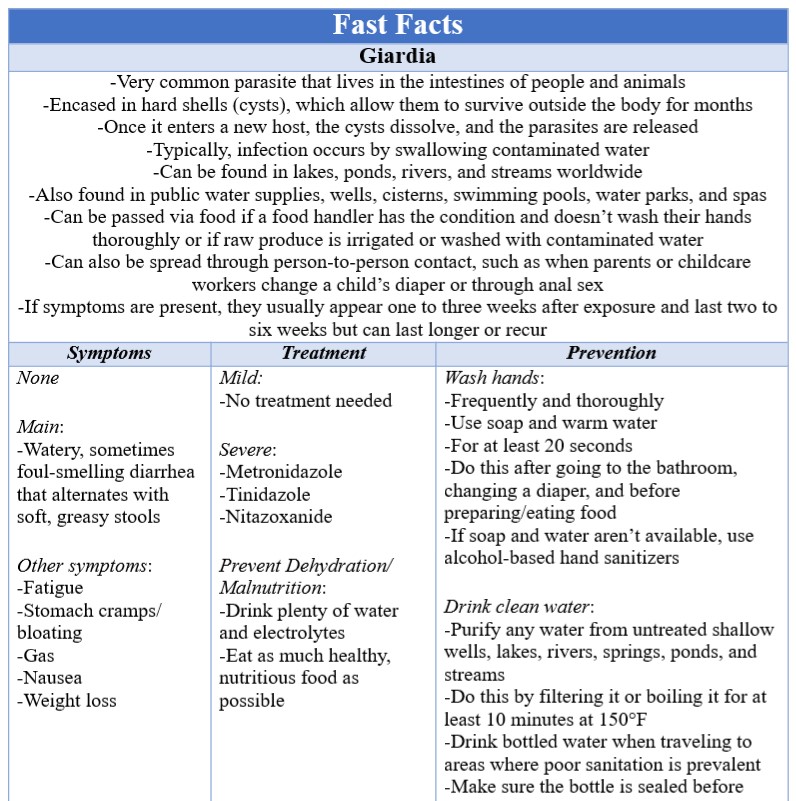 Adults and children without symptoms don’t require treatment unless they’re likely to spread the infection to others. For individuals who have symptoms, they get better on their own as well. If symptoms are severe or the infection persists, there are medications available to help. The most common one is the antibiotic metronidazole. Another option is tinidazole, which is similar but can be given in a single dose. For children, nitazoxanide is the best bet because it comes in liquid form, so it’s easier for them to swallow.

Another vital aspect of treatment is to prevent dehydration and malnutrition. Make sure you’re taking in plenty of water and electrolytes to replenish what your body is losing through diarrhea. Also, try to eat as much healthy, nutritious food as your stomach can handle.

The best way to prevent a giardia infection is to wash your hands frequently and thoroughly. This is especially true for those who interact with small children regularly. To do this properly, you need to use soap and water for at least 20 seconds. You should wash your hands after going to the bathroom, changing a diaper, and before preparing/eating food. If soap and water aren’t available, use alcohol-based hand sanitizers. It’s important to note this is better than doing nothing, but they aren’t effective at destroying the giardia cyst.

The next most important thing to preventing a giardia infection is drinking clean water. This means purifying any water from untreated shallow wells, lakes, rivers, springs, ponds, and streams. You can do this by filtering it or boiling it for at least 10 minutes at 150°F. Also, when traveling to areas where poor sanitation is prevalent, drink bottled water. Just make sure the bottle is sealed before opening it. Use it to brush your teeth too. In addition, don’t have ice added to any of your beverages.

Giardia isn’t something you want to experience, but it will get better if you do end up infected. If you have any questions or concerns about giardia, please speak with your doctor. If you would like more information, please visit the Centers for Disease Control and Prevention’s (CDC) Giardia page at https://www.cdc.gov/parasites/giardia/general-info.html