How serious is it?

When most people hear the word meningitis, they immediately think of a person having a life-threatening illness. Is this always the case? It really depends on which type of meningitis the person has. How many types are there? Which one should you be most concerned about? How do you prevent getting any kind? 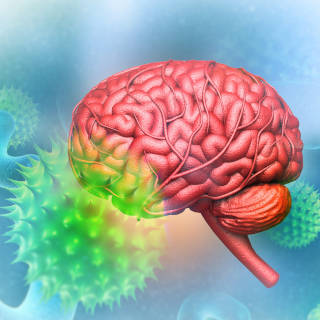 Meningitis is the inflammation of the fluid and membranes (meninges) that surround your brain and spinal cord. Many things can cause this to occur, such as viruses, bacteria, parasites, or fungus. The last two rarely happen. In the United States, the most common type is viral, followed by bacterial. Of the two, bacterial is usually more severe and can be fatal without prompt treatment. Bacteria can enter the bloodstream and travel to the brain and spinal cord, or they can directly invade the meninges through an ear or sinus infection, a skull fracture, or some surgeries.

Several types of bacteria can cause the condition, like Streptococcus pneumoniae, Neisseria meningitidis, Haemophilus influenzae, and Listeria monocytogenes. Streptococcus pneumoniae (pneumococcus) is the most common cause of bacterial meningitis. However, it more commonly causes pneumonia or ear or sinus infections. There’s a vaccine available to help prevent this infection. Neisseria meningitidis (meningococcus) commonly cause an upper respiratory infection but can cause meningococcal meningitis when they enter the bloodstream. It’s a highly contagious infection that affects mainly teenagers and young adults. Often, it’s the cause of local epidemics in college dormitories, boarding schools, and military bases. While a vaccine can help prevent infection, you should receive an oral antibiotic if you’ve been in close contact with a person with meningococcal meningitis. Haemophilus influenzae (haemophilus) was once the leading cause of bacterial meningitis in children, but the new Hib vaccines have significantly reduced the number of cases. Listeria monocytogenes (listeria) can be found in unpasteurized cheeses, hot dogs, and lunchmeats. Pregnant women, newborns, older adults, and people with weakened immune systems are most susceptible to this type.

Viral meningitis is usually milder and often clears on its own. Most cases are caused by a group of viruses known as enteroviruses, but other viruses, like herpes simplex, HIV, mumps, and West Nile, can cause the condition. Fungal meningitis is relatively uncommon, but it may mimic acute bacterial meningitis. It isn’t contagious from person to person. Instead, it’s often contracted by breathing in fungal spores that may be found in soil, decaying wood, and bird droppings. Cryptococcal meningitis is a common fungal form of the disease that affects people with immune deficiencies, such as AIDS. If not treated, it’s life-threatening, and even with treatment, it may recur. Parasitic meningitis can be caused by a tapeworm infection in the brain (cysticercosis), cerebral malaria, or amoebas (which is sometimes contracted through swimming in freshwater). However, the main parasites that cause meningitis typically infect animals, and people are usually infected by eating foods contaminated with these parasites. Meningitis can also result from noninfectious causes, such as chemical reactions, drug allergies, some types of cancer, and inflammatory diseases like sarcoidosis.

Meningitis symptoms can develop over several hours or a few days. Early symptoms may mimic the flu. Possible signs in anyone older than the age of 2 include sudden high fever, stiff neck, severe headache that seems different from usual, headache with nausea/vomiting, confusion, difficulty concentrating, seizures, sleepiness/difficulty waking, sensitivity to light, no appetite or thirst, and skin rash (sometimes). Newborns and infants may have a high fever, constant crying, excessive sleepiness or irritability, difficulty waking from sleep, inactivity or sluggishness, not waking to eat, poor feeding, vomiting, a bulge in the soft spot on top of their head (fontanel), stiffness in the body and neck, and may be difficult to comfort or cry harder when held. Slow-growing organisms that invade the membranes and fluid surrounding your brain can cause chronic meningitis, which develops over two weeks or more. Symptoms of chronic meningitis are similar to those of acute meningitis.

Complications of meningitis can be severe, such as hearing loss, memory difficulty, learning disabilities, brain damage, gait problems, seizures, kidney failure, shock, and death. The longer you go without treatment, the greater the risk. With prompt treatment, even people with severe meningitis can recover well. Certain things can increase your chances of contracting meningitis, like skipping vaccinations, age (most viral meningitis cases occur in children younger than age five and bacterial meningitis is more common in those under the age 20), being in a community setting (ex. college dormitories, military bases, and childcare facilities), being pregnant, or having a compromised immune system (ex. AIDS, alcoholism, diabetes, use of immunosuppressant drugs, or having your spleen removed). 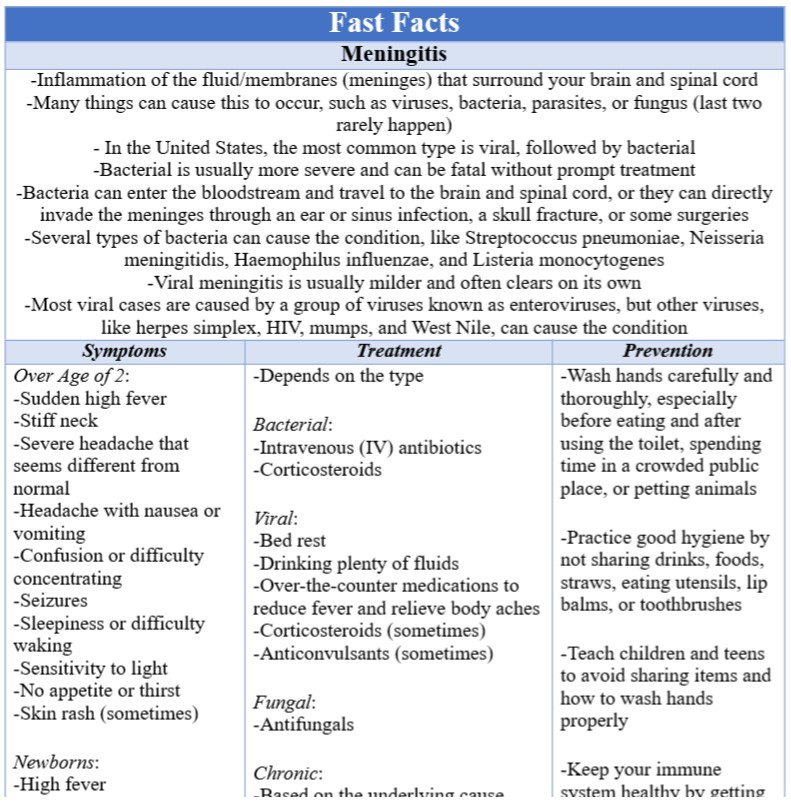 The treatment of meningitis depends on the type. Since bacterial meningitis is life-threatening, it must be treated immediately with intravenous (IV) antibiotics and sometimes corticosteroids. This improves recovery and decreases the risk of complications. The antibiotic or combination of antibiotics depends on the type of bacteria. Often, you’ll be started on a broad-spectrum antibiotic until the exact cause is determined. Sometimes, the infected sinuses or mastoids (the bones behind the outer ear that connect to the middle ear) might need to be drained.

Since viral meningitis is usually milder and antibiotics won’t work, the treatment involves bed rest, drinking plenty of fluids to stay hydrated, and over-the-counter medications to reduce fever and relieve body aches. In most cases, people improve on their own in several weeks. Occasionally, the doctor may prescribe corticosteroids to reduce swelling in the brain and an anticonvulsant medication to control seizures. If herpes is the cause, an antiviral medication is available.

Antifungal medications are used for fungal meningitis. However, these medications can have serious side effects, so these aren’t used until a laboratory can confirm that the cause is fungal. In the meantime, your doctor may use antibiotics and antivirals to ensure that you’re being treated since fungal meningitis isn’t common. Treatment for chronic meningitis is based on the underlying cause. Noninfectious meningitis due to an allergic reaction or autoimmune disease may be treated with corticosteroids.

Since the bacteria or viruses that cause meningitis can spread through coughing, sneezing, kissing, or sharing eating utensils or a toothbrush, you want to do everything possible to minimize your chances of getting it. The first step is to wash your hands carefully and thoroughly, especially before eating and after using the toilet, spending time in a crowded public place, or petting animals. Teach children to how to wash their hands properly. Practice good hygiene by not sharing drinks, foods, straws, eating utensils, lip balms, or toothbrushes with anyone else. It’s also essential to teach children and teens to avoid sharing these items. Keep your immune system healthy by getting enough rest, exercising regularly, and eating a healthy diet. When you need to cough or sneeze, cover your mouth and nose. If you’re pregnant, reduce your risk of listeriosis by cooking meat, including hot dogs and deli meat, to 165° F and avoid cheeses made from unpasteurized milk.

Since some forms of bacterial meningitis are preventable with vaccines, make sure you and your family stay current. The haemophilus influenzae type b (Hib) vaccine is recommended for children starting at about two months of age. It’s also recommended for some adults, including those who have sickle cell disease or AIDS and those who don’t have a spleen. Pneumococcal conjugate vaccine (PCV13) is part of the routine vaccination schedule for children younger than two years. Additional doses are recommended for children between the ages of 2 and 5 who are at high risk of pneumococcal disease. Older children and adults who need protection from pneumococcal bacteria may receive the pneumococcal polysaccharide vaccine (PPSV23). It’s recommended for all adults older than 65, anyone over the age of 2 who have weak immune systems or chronic illnesses, and anyone who doesn’t have a spleen. Meningococcal conjugate vaccine is advised for children between ages 11 to 12, with a booster shot given at the age 16. It’s important to note that no booster is necessary if the first shot is given at the age 16 or older. Also, this vaccine can be given to children between the ages of two months and ten years who are at high risk of bacterial meningitis or who have been exposed to someone with the disease.

Meningitis can be a scary diagnosis to receive. The good news is that with prompt treatment, you’ll be feeling better in no time! If you have any questions or concerns about meningitis, please speak with your doctor. If you would like more information, please visit the Centers for Disease Control and Prevention’s (CDC) Meningitis page at https://www.cdc.gov/meningitis/index.html#:~:text=Meningitis%20is%20an%20inflammation%20(swelling,infections%20also%20can%20cause%20meningitis