When should you be concerned?

Most of us have at least a few moles because they are fairly common. Typically, they aren’t dangerous. Since it’s summer time, you’re more likely to be in shorts and a T-shirt or a swimsuit, so, it’s a good time to check on your moles. How can you tell if you should be worried about a mole? What should you look for? How are moles treated? 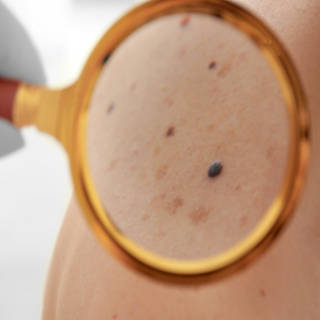 Moles, or nevi, are small skin growths and are caused by clusters of pigmented cells, known as melanocytes, which makes them appear as small, dark brown spots. They are common and most people have somewhere between 10-40 moles. They usually appear during childhood and adolescence and can change in appearance or disappear over time. Most of the time, moles are harmless, but occasionally they can become cancerous.

In order to understand if a mole is cancerous, it’s important to know what a typical mole looks like. While most moles are brown, they can actually come in a variety of colors, such as tan, black, red, blue or pink. They can be smooth, wrinkled, flat or raised and might have hair growing from them. Moles are usually round or oval and less than ¼ inch in size. They can be anywhere on your body. Hormonal changes that occur in adolescence or during pregnancy can result in the moles becoming darker and larger. Sometimes, moles are present at birth and be larger in size than moles that develop later. These moles are typically larger than 2 inches. 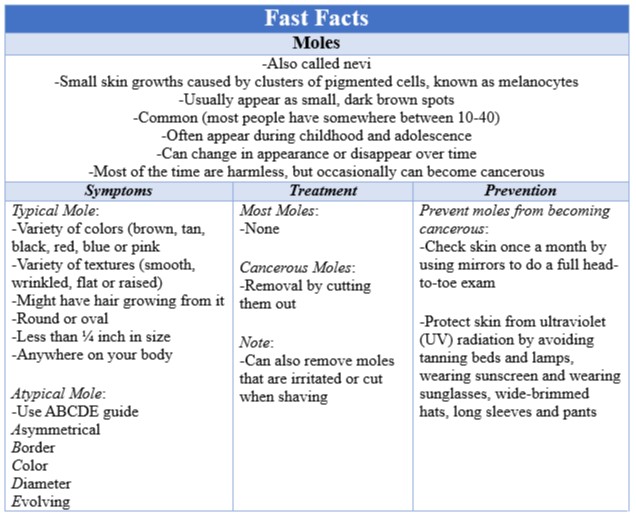 Most moles don’t need any form of treatment. However, dermatologist have come up with an easy way to remember what to look for, so you know when to see a doctor. It’s called the ABCDE guide. A is for asymmetrical and means one side of the mole looks different from the other. B is for border and is when the sides of the mole are irregular, notched or scalloped looking. C is for color and can mean that a mole changes color, is many different colors or uneven coloring. D is for diameter and refers to a new mole that is larger than ¼ inch standard. E is for evolving and means that a mole is changing in some way, like size, shape, color and height. Some moles also start to itch, bleed or turn black. If any of these things occur, be sure to go to your doctor to have them examine because the most common reason for these changes is melanoma. Certain things can increase your risk of developing melanoma. This can include being born with large moles, having unusually shaped, sized or colored moles (that have been examined by a doctor and determined not to be cancerous), having more than 50 typical moles and having a personal/family history of melanoma.

If you do have a cancerous mole, your doctor will recommend a procedure in order to have it removed. You might consider having a mole removed if it’s frequently irritated when you shave. The removal procedure involves numbing the area of skin around the mole and then cutting it out. It’s done on an outpatient basis because of quickness of the procedure. It’s important to note that you could have a permanent scar in the area afterwards. If the mole grows back, be sure to follow up with your doctor. If you decide not remove a mole that is irritated by shaving, just be sure to keep it clean anytime it’s cut and go to your doctor if doesn’t heal.

While you can’t prevent moles from occurring, you can take steps to prevent them from becoming cancerous. The most important step is to check your skin once a month. By being familiar with the location and size of your moles, you’ll be able to recognize when something is different. The only way to do a full head-to-toe check is to use mirrors. The next most important thing to do is to protect your skin from ultraviolet (UV) radiation. This means completely avoiding tanning beds and lamps. Also, wear sunscreen year-round, but especially during summer. You should use a broad-spectrum, water-resistant sunscreen with an SPF of at least 30. It should be applied 30 minutes before going outside and reapplied every two hours (if you’re swimming or sweating, you should reapply it more frequently). Another way to avoid UV is to wear sunglasses, wide-brimmed hats, long sleeves and pants. Some clothing even has built in protection against UV.

Moles aren’t anything to be too concerned about. However, by knowing what look for, you’ll be able to judge if you need to go to the doctor to be examined. If you have any questions or concerns about moles, please speak with your doctor. If you would like more information, please visit the American Academy of Dermatology’s mole page at https://www.aad.org/public/diseases/bumps-and-growths/moles