Why do you fall asleep unexpectedly?

You’ve noticed that in the past few weeks you’ve been increasingly drowsy during the day. It doesn’t matter what you’re doing, you feel like you could fall asleep in the middle of it. One day, you’re working at your desk when the tiredness overwhelms you and the next you know, you wake up 30 minutes later. What’s going on? Why’s this happening? How do you stop it? 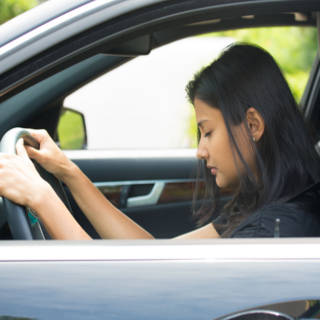 Narcolepsy is a disorder that has periods of overpowering daytime drowsiness and sudden episodes of sleep. These occur irrespective of what the person is doing, which can have some serious consequences. The normal process of falling asleep starts with the non-rapid eye movement (NREM) phase. This is when your brain waves slow down significantly. After about an hour of this type of sleep, your brain changes to rapid-eye movement (REM) sleep. This is where most of your dreaming takes place. During REM sleep, your body experiences temporary paralysis in order to prevent it from acting out your dreams. There is an important neurochemical, hypocretin, in your brain to help regulate wakefulness and REM sleep. For individuals with narcolepsy, they have lower levels of hypocretin. Scientists don’t know yet what causes this to occur, but there is something thought that it’s related to an autoimmune reaction. The result is that people with narcolepsy enter into REM sleep without going through NREM sleep first. This typically transpires within 15 minutes of falling asleep. This causes the majority of symptoms, which usually get worse the first few years, but then remain constant for the rest of your life.

The most common symptom is excessive daytime sleepiness that interferes with your ability to remain alert and focused throughout the day. Eventually, it gets to the point that you fall asleep anywhere at any time without warning. This could be while working, driving or even preparing dinner. Some people have automatic behavior during short episodes of narcolepsy, which means that they fall asleep when performing a task that they normally do and continue to do the task while asleep. Typically, you awaken and can’t remember doing the task and it doesn’t usually turn out as well as it would if you were awake. A number of individuals also undergo a sudden loss of muscle tone, called cataplexy. If a person has this, they can have mild symptoms, like slurred speech, or severe symptoms, including complete weakness in most muscles. In either case, it usually lasts just a few minutes. If you have this, you have type 1 narcolepsy. If you don’t, then you have type 2 narcolepsy. Cataplexy can’t be controlled by the individual and is typically caused by intense emotions, such as laughter, excitement, fear, surprise or anger, with positive feelings being the more common contributor. Some people only have one or two incidents of cataplexy a year, but others have several during a single day. Another possible symptom is sleep paralysis, which is the temporary inability to move or speak while falling asleep or upon waking. It usually lasts a few seconds to a few minutes. Often, it’s very scary because you’re aware of what’s going on and can recall the event after it goes away, but don’t have any control of what’s going on as it happens. This is similar to the temporary paralysis your body goes through during REM sleep, except you go through it while awake. One final possible symptom is hallucinations. These can happen as you fall asleep (hypnagogic) or as you wake up (hypnopompic). Most people describe them as very vivid and alarming since they’re not fully asleep and it feels like the hallucinations are real even though they’re not.

If you have narcolepsy, you’re more likely to have other sleep disorders, such as obstructive sleep apnea (which is when you stop and start breathing during the night), restless leg syndrome and insomnia. You’re most at risk for developing the disease if you’re between the ages of 10 and 30 and have a family history of the disorder. Numerous complications can arise. Others might see you as lazy and your performance at school or work could suffer. Obviously, the risk of incurring physical harm rises dramatically. In addition, people whose narcolepsy is triggered by strong emotions might withdraw from others as a way to prevent episodes from occurring. 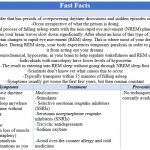 There’s no cure for narcolepsy. The good news is that medications and lifestyle changes can help you manage the condition. There are several different types of medicine that are used to treat it. The first are stimulants because they help to stimulate your central nervous system. The most commonly used are modafinil or armodafinil because they aren’t as addictive and don’t produce the highs and lows like older stimulants. For some people, these don’t work and they have to take the more potentially addictive medications, like methylphenidate or amphetamines. Selective serotonin reuptake inhibitors (SSRIs) or serotonin norepinephrine reuptake inhibitors (SNRIs) suppress REM sleep, which helps to reduce symptoms of cataplexy, hypnagogic hallucinations and sleep paralysis. These include fluoxetine or venlafaxine. Tricyclic antidepressants, like protriptyline, imipramine and clomipramine, are older antidepressants and used for cataplexy. Another drug that is very effective against cataplexy is sodium oxybate. In addition, it helps to improve nighttime sleep and in high doses control daytime sleepiness. However, it must be taken in two doses (one at bedtime and the other up to four hours later). If it’s taken with other sleeping medications, narcotic pain relievers or alcohol, it can cause difficulty breathing, coma or death. Since over-the-counter allergy and cold medicines can precipitate drowsiness, you should avoid taking these.

Besides medication, it’s imperative to make lifestyle changes that will allow you to function the best you can. The most vital change is to stick to a schedule where you go to sleep and wake up at the same time every day, especially weekends. Taking 20-minute naps during the day at regular intervals will reduce sleepiness for a few hours. Since everyone is different, you might need to take longer naps in order to feel refreshed. Since this is vital to keeping you healthy and safe, you’ll need to talk to your employer or teachers so you can devise a way that allows you to function optimally by not only take naps, but breaking up monotonous tasks, recording meetings/classes and/or standing during meetings/lectures. Getting regular, moderate exercise during the day will help you to feel more awake and sleep better at night. The key is to exercise at least four to five hours before going to sleep. To avoid making your symptoms worse, don’t use alcohol or nicotine. If you have to drive long distances, talk to your doctor about the best medicine regimen to keep you awake during this time. If at any point you feel drowsy, stop to take a nap or get out of your car to exercise. In order to cope with the disorder, going to a support group or counseling can be beneficial.

Unfortunately, there isn’t a way to prevent narcolepsy from occurring. If you have it, the best thing to do is to manage it to the best of your ability. This will reduce the chances of you getting injured and allow you to have as normal of a life as possible.

Initially, experiencing narcolepsy can be frightening. However, it can be successfully managed so you’re able to live your life. If you have any questions or concerns about narcolepsy, please speak with your doctor. If you would like more information, please visit the National Institute of Neurological Disorders and Stroke’s Narcolepsy page at https://www.ninds.nih.gov/Disorders/Patient-Caregiver-Education/fact-sheets/narcolepsy-fact-sheet