Why is your abdomen hurting?

You wake up one morning and notice that you have sharp aching sensation in your lower abdomen on one side. You also feel bloated and a sense of fullness in the painful area. What is causing this? Is it something that you should be concerned about? Does it require treatment? 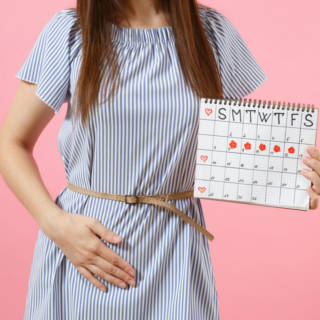 Every woman has two ovaries, one on each side of her uterus. During childbearing years, this is where the eggs are formed and matured. Normally, the ovaries are small and oval-shaped. Every month, your ovaries grow cyst-like formations called follicles. In the middle of your menstrual cycle, the egg bursts from its follicle and travels down the fallopian tube. After the egg is released, the follicles start producing estrogen and progesterone, which are the hormones that are needed for conception. When the follicle is in this stage, it’s referred to as the corpus luteum.

Sometimes, a fluid-filled sac forms in or on the surface of an ovary. These are called ovarian cysts. There are several types. The two most common are referred to as functional cysts and usually are harmless, often disappearing on their own after two or three menstrual cycles. One of the functional cysts are follicular cysts, which are when the follicle doesn’t release the egg, but continues to grow. The other type is corpus luteum cysts and occurs after the follicle releases the egg and fluid accumulates inside the follicle causing the cyst. The three other types of cysts aren’t related to your menstrual cycle. If you have endometriosis, some of your uterine cells grow outside your uterus. If these cells attach themselves to your ovary, it can cause a growth. This growth is called an endometrioma. If you have sac filled with watery or mucous material on the surface of your ovary, it’s known as a cystadenoma. Sometimes, embryonic cells attach to the ovaries and form dermoid cysts. This type of cyst can contain tissue, like hair, skin or teeth, not just fluid because they’re from embryonic cells. Despite sounding scary, these cysts aren’t usually cancerous. They’re also called teratomas. The concern with the last two types is that the cysts can become large in size, which can cause the ovary to move and increase the chances of it twisting. This is known as an ovarian torsion and can result in decreased or no blood flow to the ovary.

Most cysts don’t have any symptoms, but a large one can cause pelvic pain described as either a dull or sharp ache on the affected side. Some people also state that they feel bloated and their stomach feels full or heavy. If you have sudden, severe pain, fever, vomiting or signs of shock (ex. rapid breathing, cold/clammy skin, lightheadedness or weakness), you should see a doctor immediately as these are signs of the cyst rupturing. This is a serious complication because it can cause a significant amount of internal bleeding. Other than endometriosis, certain things can increase your chances of developing an ovarian cyst, such as having hormonal problems, being pregnant, having a severe pelvic infection and a prior history of having ovarian cysts. 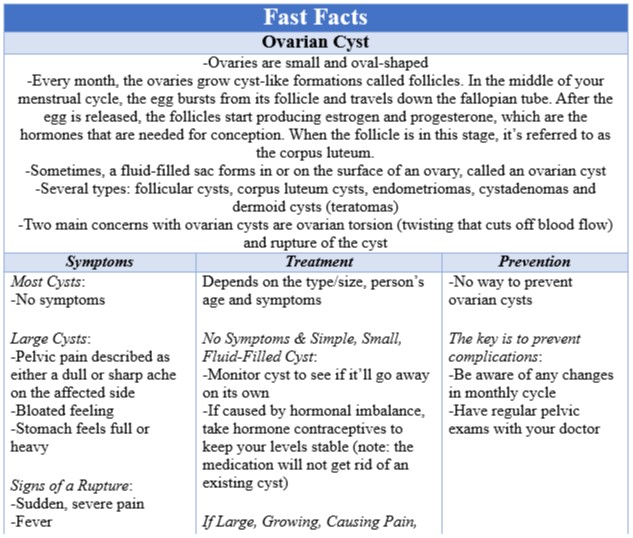 Ovarian cysts are treated depending on the type/size, your age and symptoms. If you don’t have any symptoms and an ultrasound reveals that you have a simple, small, fluid-filled cyst, then your doctor will most likely recommend that you wait before you do anything. The vital thing is to continue to monitor the cyst to see if it goes away on its own. If your cyst is caused by a hormone imbalance, your doctor will want to put you on hormonal contraceptives to keep your levels more stable, which will help prevent future cysts from forming. Keep in mind that the medication will not cause an existing cyst to go away. If a cyst is large, growing, causing pain, lasts longer than two or three menstrual cycles or doesn’t look like a functional cyst, your doctor will recommend that you have surgery to remove it. If possible, the cyst will be removed without taking out the ovary. Other times, the cyst is too large and the ovary needs to be removed as well.

Unfortunately, there isn’t a way to prevent ovarian cysts. The key thing to preventing complications is to be aware of any changes in your monthly cycle. Also, it’s essential to have regular pelvic exams with your doctor. By doing both of these, you’ll be able to catch any abnormalities sooner rather than later. If you do notice any changes, it’s important to mention them to your doctor.

Ovarian cysts are usually harmless, but it’s important to be aware of them in order to prevent any issues from occurring. If you have any questions or concerns about ovarian cysts, please speak with your doctor. If you would like more information, please visit WomensHealth.gov ovarian cyst page at https://www.womenshealth.gov/a-z-topics/ovarian-cysts