What is its role?

Your pancreas is vital to your body’s ability to function. Without out, you wouldn’t be able to survive. Despite this, you probably don’t think about it often. So, what does it do? Why is it so important? 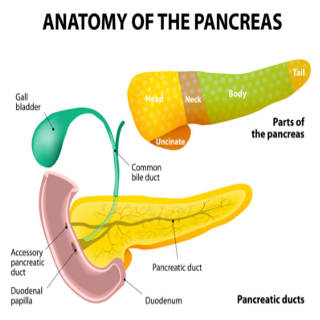 The pancreas is located deep next to your stomach deep in your abdomen. It is about six inches long and flattened in shape. It is made up of two different glands that are mixed together into one organ. The majority of the cells are exocrine cells that produce enzymes that aid in digest by releasing them into the upper portion of the small intestines (duodenum) via ducts. The second type of cells are endocrine cells and are composed of small islands of cells (islets of Langerhans). They release hormones (insulin and glucagon) into the blood stream, which helps to control blood sugar levels.

There are several medical conditions that can affect the pancreas. The one most people are familiar with is Diabetes. In type I, the body’s immune system attacks and destroys the insulin-producing cells. This means that people with type I will need to have insulin injections to control blood sugar for their entire life. In type II, the pancreas loses the ability to appropriately produce and release insulin. In addition to this, your body becomes resistant to insulin causing your blood sugar level to rise. Another condition that many people are aware off is Cystic Fibrosis. This a genetic disorder that actually affects multiple organs throughout the body, especially the lungs and pancreas. It causes people to have type I Diabetes and digestive problems throughout their life. Pancreatic cancer can be challenging to treat because of the different cells located within the pancreas, each type of cell can give rise to a different type of cancer. The most common type is related to the cells located in the pancreatic duct lining. Unfortunately, due to the location, it is hard to diagnose because there aren’t any symptoms until it is in advanced stages. Islet of Langerhans cell tumors can occur by the hormone-producing cells multiplying abnormally creating a tumor. They can be benign or malignant. Typically, the tumors produce excessive amounts of hormones and release them into the bloodstream, which significantly impacts blood sugar levels. Pancreatitis is when the pancreas because inflamed and damaged. This is typically the result of its own digestive chemicals and causes swelling which can lead to tissue death. It is often attributed to excessive alcohol intake or gallstones, but sometimes the reason is never found. Pancreatic Pseudocyst are a fluid-filled cavity that forms around the pancreas after an episode of pancreatitis. They can resolve by themselves or may need surgery to remove them. An enlarged pancreas can occur for no reason. It may be a normal finding; some people have larger pancreases than others. Otherwise, it could indicate that something is wrong and requires treatment. 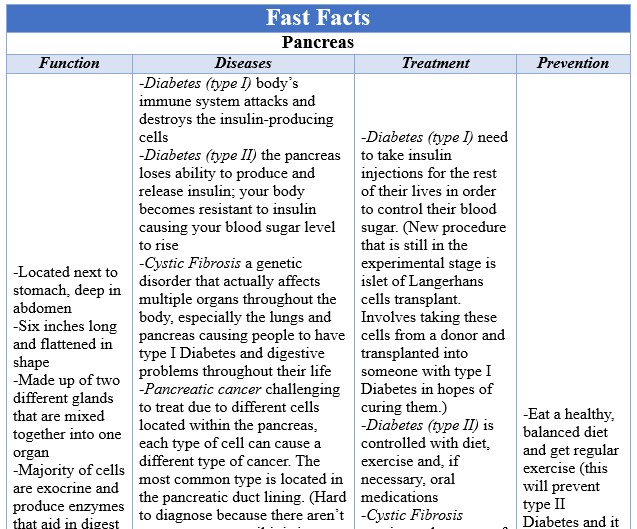 Since there are a wide variety of diseases that affect the pancreas, the treatments also vary greatly. For those with type I Diabetes, they need to take insulin injections for the rest of their lives in order to control their blood sugar. A new procedure that is still in the experimental stage is islet of Langerhans cells transplant. It involves taking these cells from a donor and transplanted into someone with type I Diabetes in hopes of curing them. If you have type II, then it is typically controlled with diet, exercise and, if necessary, oral medications. For people with Cystic Fibrosis, they require replacement of the pancreatic enzymes that aren’t being produced. Sometimes, if your Diabetes or Cystic Fibrosis are severe enough, a pancreatic transplant is possible. The treatment for Pseudocyst is to let them resolve on their own, drain the fluid from them or surgery to remove it. Pancreatic cancer usually involves having a Whipple procedure done. This is where the head of the pancreas, gallbladder, duodenum and, occasionally, small part of stomach are removed. Once this done, you will need to monitor your blood sugar levels in order to see if you need help controlling it via insulin injections or oral medication.

Unfortunately, the majority of the conditions that affect the pancreas are related to genetics and not something that can be prevented. They can be treated and managed, which is the good news. The most important thing to remember is to eat a healthy, balanced diet and get regular exercise. Most likely, this will prevent type II Diabetes and it will help to manage many of the other conditions. In regards to Pancreatitis, it is important to not drink excessive amounts of alcohol and to be treated for gallstones if you have them.

Your pancreas is an important part of your digestive system and its ability to function appropriately is vital to your survival. If you have any concerns about how your pancreas is functioning, please speak with your doctor. If you would like more information about your pancreas, please visit The National Pancreas Foundation at https://pancreasfoundation.org/patient-information/about-the-pancreas/