What is causing the tremors?

When you hear the word Parkinson’s, you probably think of one of two things, either someone who experiences tremors or Michael J. Fox because he has been a spokesperson for the disease for a long time. While you may know that Parkinson’s causes involuntary shaking, what is it exactly? Can it be prevented? 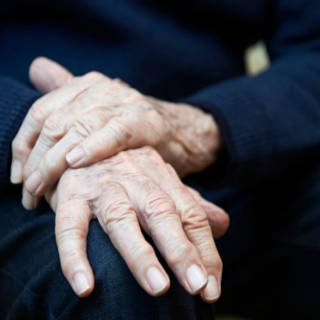 Parkinson’s disease is caused by neurons (nerve cells) in your brain gradually breaking down or dying, which causes a decrease of production of a chemical called dopamine. Dopamine helps your brain to function normally, so when there are decreased levels of it, your brain is unable to operate properly resulting in a variety of symptoms. The most common are tremors that usually start on one side of your body and, as the disease progresses, affect both sides. Typically, the initially affected side will always have worse tremors than the other. Another main symptom is the decrease ability to move (bradykinesia), which means your movement becomes slower, which makes completing tasks challenging and lengthy. Parkinson’s can also cause muscle stiffness, difficulty balancing, reduced ability to do things that you don’t normally think about (ex. blink, smile or move your arms while you walk), speech changes (ex. softer, monotone, quicker or slurred), writing becomes difficult, difficulty swallowing, sleeping problems, inability to control bladder function, constipation, changes to blood pressure, inability to smell as well as you used to, fatigue, depression, pain and sexual disfunction.

The exact cause of Parkinson’s disease is unknown but thought to be a combination of genetic factors and environmental triggers. There are specific substances found within the brain cells of people who have the disease, Lewy bodies, and are thought to play a role in the development of Parkinson’s. There are many substances within the Lewy bodies, but an important one is a protein called alpha-synuclein (A-synuclein) which is found in a large clump that cells can’t break down. The disease usually presents when you become 60 or older and is more likely to present in men. 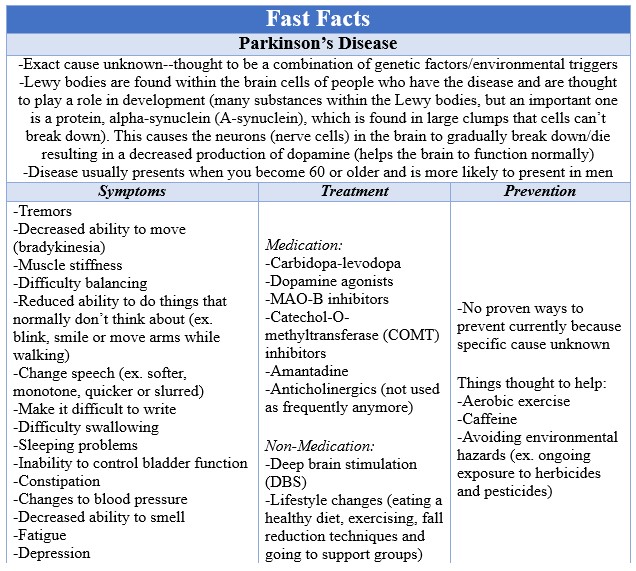 There are a few options when it comes to treatment for Parkinson’s disease. There is currently a cure for it, but initially be fairly well controlled with medications. The main medication that is used is carbidopa. It is the most effective since it is a natural chemical that enters your brain and is transformed to dopamine (a chemical released by your neurons to send signals to other nerve cells, which makes it vital to brain function). Carbidopa is often combined with levodopa because it prevents carbidopa from being converted to dopamine outside your brain. These medications are combined in the same pill (Rytary, Sinemet) so they can be taken at that same time. There is an infusion version (Duopa) that comes in a gel form delivered via a feeding tube directly to your small intestines. It is a continual infusion, allowing blood levels of the medications to remain stable. Another type of medication, dopamine agonists (Mirapex, Requip, Neupro), mimic the effects of dopamine in your brain. They aren’t as effective at treating the symptoms, but they last longer, so they are often used in combination with carbidopa-levodopa in order to provide better relief of symptoms. MAO-B inhibitors (Eldepryl, Zelapar, Azilect) prevent the breakdown of dopamine that is already in your brain by inhibiting the enzyme monoamine oxidase B (MAO-B), which normally disposes of dopamine from the brain. Catechol-O-methyltransferase (COMT) inhibitors (Comtan) works similarly to MAO-B inhibitors, but on a different enzyme. A different class of medication, Amantadine, can provide short-term relief of mild symptoms in the early stages of Parkinson’s. Anticholinergics, such as Cogentin, were used for many years, but due to only mild benefit and numerous side effects, their use has decreased in recent years.

A non-medication treatment option is deep brain stimulation (DBS). This is when electrodes are implanted in specific parts of your brain by a surgeon. The electrodes are connected to a generator that is usually implanted in your chest and send electrical impulses to your brain. The thought is that it interrupts the flow of impulses from your brain, thereby, reducing the tremors. Your doctor is able to adjust the frequency of the electrical impulses to help provide the most benefit. Given the risks associated with having the procedure completed, it is only offered to people with advance stages of Parkinson’s who are not responding well to levodopa. When it works, DBS can help stabilize medication fluctuations, decrease or get rid of involuntary movements, decrease tremors/rigidity and improve the slowing of movement. While this can be an amazing benefit for those with Parkinson’s, it doesn’t keep it from progressing.

Lifestyle changes are also key in treating some of the symptoms of Parkinson’s. By eating a healthy diet, it helps to avoid constipation and other digestive complications that can arise. Exercising can help to build muscle strength, flexibility and balance, some people have found massage, acupuncture, yoga, tai chi and/or meditation to be a way to do this. Due to the challenges with balance, people with Parkinson’s are at increased risk for falling. To prevent falls, it can be helpful to not move too quickly, walk where you heel touches the floor first, stand straight, look in front of you (not down), don’t pivot your body over your feet when turning around, keep your weight evenly distributed between both feet, don’t walk backwards and avoid carrying things while you walk whenever possible. Since depression is common, it is important to be aware of the possibility of it occurring and address it with your doctor. Going to support groups can be helpful and talking to family/friends about how you’re feeling can provide a way to cope.

Unfortunately, there are currently no proven ways to prevent Parkinson’s disease. This is mainly due to the fact that we don’t know the specific cause. There are certain things that have been shown to help decrease the risk of getting Parkinson’s. Regular aerobic exercise is an important one. Also, it has been shown through some research that caffeine may decrease the risk as well. Certain environmental factors (ex. ongoing exposure to herbicides and pesticides) can increase your risk of Parkinson’s, so by reducing contact with these items can help lessen the chances of getting it.

Parkinson’s disease impacts every aspect of your life. Thankfully, there are some options to help manage the symptoms. Hopefully, we are moving towards finding the cause so we can develop even better treatment than we currently have and maybe prevent it completely. If you have any questions or concerns about it, please speak with your doctor. If you would like more information about it, please visit the Parkinson’s Foundation at http://www.parkinson.org/