Recently, there have been several commercials on TV advertising for adults to get the pertussis (whooping cough) vaccine. In the commercial, they show grandparents interacting with their grandkids and talk about the dangers whooping cough can present to children. What is it? Why is it important for adults to get the vaccine? Do children need the vaccine? 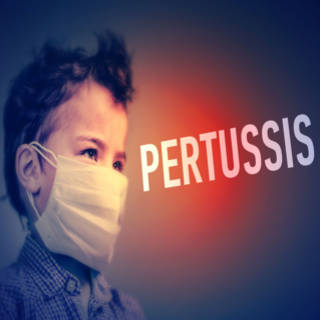 Pertussis is a respiratory infection that is caused by the bacteria Bordetella pertussis. It has a hacking cough that is often followed by an intake of breath that is high-pitched and sounds like a “whoop.” This is why it’s also known as whooping cough. It’s highly contagious and spread when an infected person coughs or sneezes resulting in the bacteria being released into the air. There are three stages of the disease. The first usually lasts one to two weeks and has symptoms similar to a cold, such as runny nose, sneezing, low-grade fever and a mild cough. The second usually lasts one to six weeks, but can last as long as ten weeks. The main symptom is numerous, rapid coughs followed by a long inhaling effort that is characterized by a high-pitched whoop due to the buildup of mucus in your airways. For adolescents and adults, they can have broken/cracked ribs, abdominal hernias or break blood vessels in their skin/whites of their eyes from coughing so hard and frequently. During this stage, infants and young children will often appear very ill and distressed. Occasionally, after coughing they may turn blue and/or vomit. They can end up with severe complications, like pneumonia, slow/stop breathing, dehydration, weight loss due to feeding difficulties as a result of vomiting, seizures or brain damage, that require them to be hospitalized. This age group is also the most at risk for dying from the disease. The third stage usually lasts two to six weeks, but can last for months. The cough typically disappears within two to three weeks, but may recur if the patient suffers any subsequent respiratory infections. Typically, it presents milder in adolescents and adults. They usually just have a persistent, hacking cough similar to other upper respiratory infections (it doesn’t always have the characteristic whoop sound). The concern is that these individuals are still able to transmit the disease to others, especially unimmunized or incompletely immunized infants. 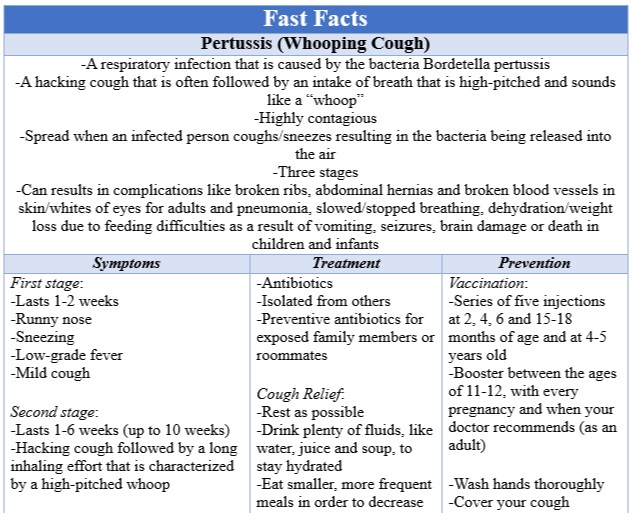 The treatment for pertussis involves taking antibiotics to kill the bacteria. For infants and small children, they will often need to be hospitalized. For older children and adults, they can manage their infection at home. If you or a loved one is sick, keep isolated from others, especially small children so you don’t cause them to become ill. Often doctors will prescribe preventive antibiotics to exposed family members or roommates since it’s so contagious. Doctors will also usually prescribe preventive antibiotics if you have been exposed to someone with pertussis and are pregnant, under the age of 12, have a health condition that could put you at risk for severe health complications (ex. asthma or weakened immune system), you live with someone who is at high risk for developing severe illness or complications if they got pertussis or you’re a healthcare worker. Unfortunately, there are no medicines that help relieve the cough. Over-the-counter cough medications don’t work and, therefore, are not advised. There are several things that you can do to deal with the coughing spells. Try to get as much rest as possible. Drink plenty of fluids, like water, juice and soup, to stay hydrated. It can be helpful to eat smaller, more frequent meals in order to decrease the chances of vomiting due to coughing. Don’t smoke, be around anyone who is smoking or anything else that might irritate your lungs. If you need to be around other people, then wear a mask to decrease the chances of getting them sick.

The best way to prevent pertussis is by having the vaccine. Prior to the development of a pertussis vaccine in the 1930s and the widespread use of it in the 1940s, whooping cough was a childhood disease that many children were afflicted and killed by. The vaccine is often given in combination with vaccines for two other diseases, diphtheria and tetanus, in a single shot known as a Tdap. The vaccine is usually given as part of the standard regime of childhood vaccinations. It’s given as a series of five injections at 2, 4, 6 and 15-18 months of age and at 4-5 years old. A booster is often given between the ages of 11-12 because immunity wanes over time. For adults, it’s a good idea, especially if you’re around small children, to get a booster vaccine as frequently as it’s recommended by your doctor. It’s also suggested that pregnant women get a booster every time they are pregnant because this is thought to help provide some immunity to the unborn infant. Given the success of the vaccination program, the disease mainly affects adolescents and adults whose immunity has faded or children who are too young to have completed the full course of vaccinations. Besides getting the vaccination, the best thing that you can do to prevent yourself from getting pertussis is to wash your hands thoroughly, especially if you’ve been around people who have been coughing. If you have a cough, be sure to cover your mouth in order to prevent spreading germs to other people.

Pertussis can be a very serious disease. The good news is that there are steps you can take to keep you and your loved ones healthy. If you have any questions or concerns, please speak with your doctor. If you would like more information, please visit the Center for Disease Control (CDC) pertussis page at https://www.cdc.gov/pertussis/index.html