Do we really need a pill for everything?

Every time you turn the television on there is a commercial for a new medication. Some of them are to treat diseases for that have been known about for a while, but others are for new diseases. Why is this the case? Why have we become a culture that is so dependent on medications to “fix” whatever ails us? Is there really a need for all of these medications? 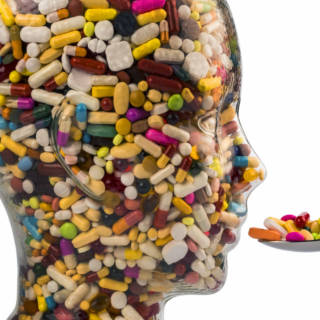 As a society, we are taking more prescription medications than ever. Over 70% of American adults are on prescriptions drugs, more than 50% take two and 20% take five or more. More than 25% of children and teenagers in the United States take medication on a regular basis. Our country turns to pills for solutions to health problems more than many other industrialized wealthy countries. The United States spends two times more on pills, and takes twice as many pills when compared to other countries. The reason behind this is that many Americans, and their doctors, feel that every symptom or even a hint of a disease requires a pill. We view a pill as the answer to the challenges of human body, believing that there is a pill for everything. It doesn’t matter if an issue physical or emotional or something that hasn’t even manifested itself yet. Our culture is driven by the logic that ingesting a pill, we can have a healthy and happy life. Where did this idea come from?

There are several components that contributed to this problem. Thanks to the information available on the internet, many people self-diagnosis. Also, we believe in exchange for paying our co-pay, we should receive a medication that will make us feel better. Due to these two factors, patients are quick to ask for medications. Also, we expect a quick fix. When a medication isn’t working, we are likely to mix pills, increase dosages or ignore dosages listed on prescription bottles. We’ll even take additional medication and, in some cases, three or more for just one ailment. All of these combined are why self-medicating has become a serious issue.

Overprescribing has become a huge issue not only because of the patients asking for medications, but for several over reasons. These include some physicians aren’t aware of the fact that they are prescribing inappropriately, have difficulty identifying which drugs are inappropriate, believe that adverse effects of drug interactions are outweighed by the benefits, worry about meeting performance benchmarks or are concerned about liability if something should go wrong. Patients play a role in this because they resist the change of medications because they think that alternatives will not be as effective. Many Americans have multiple medical conditions and take up to 20 prescriptions a day. This is known as polypharmacy and is associated with an increased risk of experiencing adverse drug interaction reactions and general side effects. In some cases, the effects of the medication are worse than the symptoms of the condition. It is estimated that 400,000 preventable adverse drug events that place in hospitals each year, which costs about $3.5 billion. Also, upon discharge, one-fifth of patients have a preventable drug-related complication when they get home. It is guesstimated that $200 billion a year is spent on unnecessary and improper use of medication.

Another big part of the problem is that pharmaceutical companies are allowed to advertise for the drugs they make. In the 1990s, it became legal for drug makers to advertise and since then the demand for prescription medications has skyrocketed. There is a great deal of money to be made from telling people that they are sick and the pharmaceutical companies are well aware of this given the amount of money they spend and corporate lobbying they do. On average, the money they spend yearly on marketing to consumers is about six times that of the yearly budget for the Food and Drug Administration (FDA). The sad fact is that they spend twenty-four times the FDA’s budget on marketing to doctors. Also, they are actively involved in sponsoring the definition of diseases and promoting them to both prescribers and consumers. This process has become known as “medicalization,” which is when a condition that was not previously thought of as an illness becomes defined and treated as such. When you combine this with a very busy healthcare system and patients who are asking for medications that they see advertised, it makes writing a prescription the easiest way to deal with a patient’s concerns.

In order to improve people’s health by decreasing the number of medications they are on, there are several things that need to be done. The first is to practice deprescribing. This is the idea of taking patients off of medications that they do not need to be on. Doctors should be routinely reviewing patient medication regimens and adjusting them accordingly. It is especially important to do this when a patient is being discharged from a hospital. However, it will work only if patients are involved in the process. They can help by asking their doctors if any of the medications they are taking are unnecessary. It is essential to not wean yourself off of any medication without consulting with your doctor first. Recently, the American College of Physicians has recommended that doctors try nondrug approaches first for some conditions. Also, there has been an increasing interest in a process called, “Slow Medicine,” which is focused on finding the cause of a person’s illness and providing an intervention that gives the body time to heal while using the minimal amount of medication as possible. Another consideration, once your body gets used to having a medication in it to treat an ailment, it becomes dependent on the medication to treat the symptoms and correct the illness. It is important for doctors to not prescribe medications too early in a disease process because your body can build up tolerance to the medication, which makes them less effective when you truly it.

As patients, we need to realize there are no magic pills and medications aren’t for everyone. In most cases, it shouldn’t be the first choice to treat an ailment. The first step would be to do a lifestyle examination. Doctors should be helping people develop coping skills and encouraging lifestyle changes in order to address ailments. This is often the better course of treatment, but it isn’t the most popular because it isn’t fast enough. Which is why having reasonable expectations as far as results is key to stick with the changes recommended by your doctor. Another aspect that needs to change is the way health insurance is structured. Currently, the out-of-pocket cost for patients is cheaper to pay for medications than it is for them to pay for nondrug options. This, understandably, makes patients resistant to trying non-drug options.

There is no question that the current American society is focused on using medications to fix any, and every, medical problem they have whether it is real or created by pharmaceutical companies. Even with taking all of these medications, our society is one of the unhealthiest when compared to other industrialized countries. In order to increase the health of all Americans, we need to shift our thinking, stop prescribing so many pills and make better lifestyle choices. We need to realize that there is no quick fix when it comes to our health!