More and more research is coming to light on just how bad plastics are not only for the environment but our bodies. One area of particular concern is when plastic containers are used to store food, especially if the food is warmed or cooked in these types of containers. Why is this so bad? Is using a plastic container in the microwave dangerous? 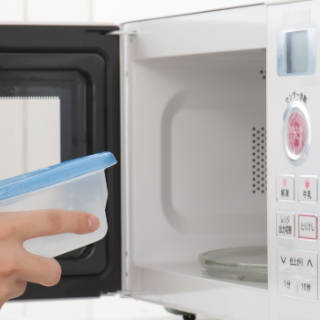 What do you think of when you hear the word “plastic”? It’s pretty easy to come up with several things because it’s used in a variety of products due to its durability, flexibility, and being lightweight. Plastic is a synthetic or semi-synthetic material comprised of long chains of polymers, which contain several thousand repeating units called monomers. Typically, they’re made from oil and natural gas. However, they can be made from renewable materials such as wood pulp and cotton.

If you look at the bottom of most plastic products, you will find a recycling triangle with a number ranging from 1 to 7. This is the resin identification code and tells you what type of plastic the product is made of. The seven types of plastic and products produced from them include:

One of the most commonly found polycarbonate (PC) is bisphenol A (BPA). It’s been widely used since the 1960s to make food storage containers, drinking glasses, and baby bottles. Another chemical of concern is phthalates, which are usually found in products with a 3 or 7 code. Phthalates are found everywhere, like in the coatings of pills and nutritional supplements. They’re also used in gelling agents, lubricants, binders, emulsifying agents, and suspending agents. In addition, they can be found in medical devices, detergents, packaging, paint, modeling clay, pharmaceuticals, textiles, sex toys, nail polish, liquid soap, and hair spray.

There’s mounting scientific evidence that these plastics harm our health, starting before we’re even born. Almost all Americans have measurable amounts of phthalates and BPA in their bodies. One concern with these manufactured chemicals is that they can seep from the containers or wrappings into the food and drinks they’re holding. This is especially true when the products are heated. An analysis of 455 common plastic products, including supposedly BPA-free ones, found that 70% tested positive for estrogenic activity, and that number increased to 95% when the plastics were microwaved.

The other issue is that the plastics that we don’t consume end up in landfills, where they break down into microplastics and can absorb harmful pollutants. These then enter our oceans, water, and food supply. A 2009 review examined the existing literature on how plastic ingestion affects people and animals. It discovered a wide range of effects.

The chemicals in plastics, especially BPA, disrupt your body’s hormones and have been linked to obesity, diabetes, and reproductive harm. Hormones are essential because your body uses them to regulate itself. They function like little messengers traveling through the bloodstream and triggering different organs and systems to work together. Essentially, they’re regulatory molecules that operate at a trillionth of a gram level. Imagine putting something with a similar structure to your hormones and acting like them in your body. This interferes with the delicate balance our bodies need to maintain life. This is what ingesting even low doses of chemicals from plastic over a period of time can do. Hormones act on all parts of the body, and even minor disruptions, especially at critical moments in development, can have permanent and lifelong consequences.

When reviewing the literature on the human health effects of chemicals in plastics, links have been seen between exposures to BPA, phthalates, and other plastics additives and Type 2 diabetes, cardiovascular disease, obesity, decreased immune function, and reduced fertility. In fetuses, BPA exposure was associated with an increased risk of miscarriage, low birth weight, childhood obesity, and potential cognitive effects. Evidence is particularly strong for connections between early BPA exposure and altered behavior and disrupted neurodevelopment in children. Children are also more likely to develop asthma.

It’s essential to point out that definitive human studies of the health effects of plastic exposure are hard to come by because the studies are primarily epidemiological. This means researchers can only talk about associations between exposures and specific health outcomes. They can’t, with 100% accuracy, find causal relationships. Another issue is that it’s not always clear what compounds a package is made of because manufacturing plastic polymers also yields a lot of byproducts that aren’t necessarily tested for safety. So, it’s hard to design studies to understand the effects of any single chemical.

When drawing conclusions from animal studies, there’s one important consideration. Many of them involve very high doses of plastic exposure, much higher than anything most humans are exposed to. Much of the early research into plastic consumption was conducted by toxicologists rather than endocrinologists (doctors who focus on hormones). The more you’re exposed to toxins, the greater the effect. This isn’t true of hormones. Hormones, and plastics that mimic them, are part of complex feedback systems in our bodies that don’t have a linear effect directly related to a specific dose. A 2012 study found DEHP, a phthalate found in food packaging, produced adverse reproductive effects in quantities up to 25,000 times lower than had been previously thought.

As a response to the growing evidence regarding the harm of plastics, the Food and Drug Administration (FDA) established the Packaging and Food Contact Substances program in 1997. It’s a regulatory system to determine what packaging products are safe. It requires anyone who manufactures a “food contact substance,” which includes chemical additives, coatings, paper, or polymers, to get approval from the FDA before putting it on the market. However, there’s an exception to this rule—“Generally Recognized as Safe (GRAS)” substances. This category was created for food items with a long history of use, like caffeine or sugar, and no evidence of harmful side effects. The problem is the list of GRAS-accepted polymers in packaging is long, so potentially harmful chemicals can be used in food packaging. Since the FDA doesn’t test things that get put on this list, it leaves the decision up to the manufacturing companies. According to Consumer Reports, these companies don’t need to show any peer-reviewed evidence before placing their products on the GRAS list, making it extremely difficult, if not impossible, to get the kind of evidence that would guarantee complete safety. The burden of proof is on regulators instead of manufacturers. The US Government Accountability Office has stated that regulations for GRAS products should be tightened.

Another worry is the lobby being done by the chemical industry, which could make regulators less likely to thoroughly examine the effects of plastics. According to the Center for Responsive Politics, a nonprofit organization that tracks lobbying efforts, one plastics manufacturer, Dow Chemical, spent nearly $14 million in 2016 lobbying Congress and federal agencies. In addition, the American Chemistry Council, a large umbrella organization that lobbies on behalf of plastic manufacturers, spends between $5 million and $13 million on lobbying every year. They have done this since 2009.

Currently, the FDA states that exposure to five micrograms of BPA per kilogram of body weight per day is safe. However, in 2012, growing public concern over the potential health risks of BPA led the FDA to ban its use in baby bottles and sippy cups. The agency also prohibits the use of BPA-based materials in infant formula packaging. As a result of this public pressure, many companies are now making many BPA-free products, using BPA alternatives like bisphenol S and F (BPS and BPF) because they’re thought to be more resistant to leaching.

Despite this train of thought, these chemicals have their own problems. Many scientists point out that these chemicals are structurally similar to BPA. In January 2015, a study conducted by scientists at the University of Calgary showed adverse effects of BPS lead to abnormal brain cell growth and hyperactivity in zebrafish. Since zebrafish have very similar developmental processes as humans, they’re commonly used as a biomedical model for understanding embryonic brain development. According to the nonprofit Environmental Working Group, the replacements for BPA haven’t been tested enough to know if they’re truly safe. One 2011 study examined over 400 plastic containers designed to contain food and found nearly all leaked chemicals that disrupt hormones. Further, low-level exposures were where the greatest component of effects happens, meaning there’s no safe level of exposure. Another point is that even though the plastics are BPA-free, they can release other hormone-disrupting chemicals like phthalates.

The bottom line: It’s up to consumers to manage their exposure to the chemicals in plastics.

One of the most important things to do is to avoid microwaving plastic. Since microwaves heat unevenly, they can create hot spots where plastic is more likely to break down. If a container is specifically labeled safe for microwave use, it’s okay to use per the FDA. Yet, keep in mind that this means the product won’t melt or break when heated—it doesn’t mean they’re safe. If microwaving food in plastics is unavoidable, look at the recycling codes at the bottom of the container. Avoid any that have code 3 or 7. The United States Department of Agriculture’s (USDA) Food Safety and Inspection Service advises that you don’t reuse margarine tubs, take-out containers, whipped topping bowls, and other one-time use containers because they’re more likely to melt and cause chemicals to leach into food. Also, don’t reuse trays from pre-packaged microwavable foods. When warming food in the microwave, cover it with wax paper, parchment paper, or a paper towel. If you heat food in a plastic container, water rises as steam from the food and then condenses on the underside of the lid. The extracted chemicals from the top then fall into your food.

While microwaving plastic accelerates the release of BPA and phthalates, it’s not the only way these chemicals end up in your food or drinks. Some other ways include placing foods in plastic containers that are still hot, scrubbing containers using abrasive materials (ex. steel wool) because it can cause scratching, using containers for an extended period, and exposing containers to the dishwasher repeatedly. If you must wash any plastic in the dishwasher, put them on the top rack. Replace any plastic containers showing signs of wear with new containers that are BPA-free, such as those made from glass or stainless steel. Be careful with plastic food packaging such as clingy plastic wrap can contain BPA and phthalates. Any condensation underneath the plastic wrap could drip down into the food.

While plastics are useful for many things, it’s not advised to use them for food products. Do you’re best to limit how much plastic your food comes into contact with. Non-plastic containers can seem like an expensive investment, but they are usually more durable than plastic and healthier for you!