Is it better than traditional?

Surgery can be a complicated process. Therefore, surgeons train for years to gain the experience needed to perform a single procedure. Technology is hoping to change that with the use of robots. Yes, robots. Well, at least robotic tools operated by humans. Is this form of surgery better? What should you be concerned about? 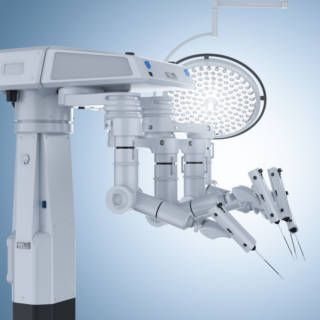 Robotic surgery, or robot-assisted surgery, is on the rise. It’s been rapidly adopted by hospitals across the country in treating a wide range of conditions. It allows doctors to perform many complex procedures with more precision, flexibility, and control than conventional techniques. Robotic surgery enhances accuracy in visibility, predictability, consistency, and adaptability. Most often, it’s associated with minimally invasive surgery, but it also can be used in specific traditional open surgical procedures.

When you hear the word “surgery,” you probably think of the traditional open technique. This involves a single large incision, the size of which depends on the procedure. The surgeon can directly visualize the surgical field and uses their hands and short instruments to perform the operation. Minimally invasive surgery, or laparoscopy, became a sensation just a few decades ago because it requires only three or four small incisions versus the large single incision. It uses a small telescope with a high-definition camera on the end of it. The outcome is that most patients experience less pain/infections, shorter hospital stays, and a quicker return to regular activity. In fact, many procedures are now performed on an outpatient basis. It’s important to note that a surgeon performs laparoscopy without a robotic system. There are some shortfalls to laparoscopic surgery. The biggest is surgical instruments used for a laparoscopic procedure have a limited range of motion. Another issue is the standard laparoscopic surgery uses only one camera that provides a two-dimensional view.

Robotic surgery was developed to overcome these deficits and improve upon traditional laparoscopy. The surgeon performs the surgery by controlling every movement of the robotic arms while seated next to the operating table. The advanced, three-dimensional camera offers an immersive experience for incredible visualization. Each robotic arm has 360° movements, which allows for greater dexterity than the human wrist. This means surgeons can operate in very tight spaces in the body that would otherwise only be accessible through open (long incision) surgery. It allows surgeons to perform complex surgical tasks through tiny incisions using robotic technology. The surgeon’s hand, wrist, and finger movements are transmitted through the computer console to the instruments attached to the robot’s arms, which means the surgeon is in complete control of the movement of all the instruments. In a way, it works similarly to a video game. Robotic surgery helps to eliminate certain aspects of surgery, such as hands that vibrate or shake. It’s similar to laparoscopic surgery in that it usually results in reduced pain/infections, shorter hospitalization, faster recovery time, and quicker return to normal activities. Smaller incisions require less poking and prodding, shortening the overall procedure time. This means a reduced likelihood of pain or injury to the surrounding ligaments and tissues, reduced blood loss, and minimal scarring.

Robotic surgery does involve some risks. There is still a small chance of infection, but it’s usually much less than traditional open surgery. Depending on the type of surgery you need, your past medical history, and your current medical condition, robotic surgery may have some disadvantages. This means you should speak with your doctor about whether it’s suitable for your situation before deciding on moving forward with a procedure. Those who should be cautious when considering robotic surgery are anyone with a current infection or high risk of infection, significant bone thinning, or obesity.

Another potential issue is mechanical failure/malfunction or surgeon error. These are incredibly rare but can potentially occur. In these cases, the surgeon must step in and switch to another type of surgery (usually open). It most often comes down to the experience of the surgeon. While a surgeon must complete training before performing robotic surgery, there isn’t a set standard of what that entails. Some hospitals may require surgeons to perform three robotic surgeries before approving them to operate, whereas others may require 50 or 100 operations. As with anything, the more experience you have, the less chance you have of making a mistake. Since laparoscopic and robotic surgery is generally technically more complex, the learning curve for a surgeon is higher. This means surgeons doing these surgeries need more experience to avoid complications. Another vital factor is the ongoing caseload. Surgeons must have a steady number of surgeries per week or month to maintain and improve their skills. One complaint about robotic surgery is that it doesn’t provide surgeons with enough haptic feedback, which is a combination of force feedback and tactile feedback that stimulates the feeling of touch. This is key for helping a surgeon recognize and adjust for applying excessive or inadequate force during surgery.

Unfortunately, even after being used for years, the evidence that robotic surgery trumps other methods is lacking. It hasn’t improved patient outcomes as dramatically as the first wave of minimally invasive surgery did. A decade after the laparoscope appeared, it had proven that patients fared better with its smaller incisions than they did with open surgeries that require a large incision. The ECRI Institute is a nonprofit organization that synthesizes data on medical procedures, drugs, and devices to support hospitals and doctors in creating quality protocols. It has analyzed more than 4,000 studies on robotic surgery and found that the evidence isn’t strong enough to determine whether or not a robot is better than traditional minimally invasive surgery. Since robotic surgery costs roughly ten times that of laparoscopic surgery, they need to do significantly better as far as outcomes. It was initially designed to do cardiovascular surgery but has fallen out of favor. Next, it was used for gynecological surgeries, but in 2013, the American College of Obstetricians and Gynecologists (ACOG) said it wasn’t the best or even the second-best option. Then it was the “thing” for prostate removals, but research shows it’s no better than open surgery. A 2017 study covering a 13-year period compared robotic and non-robotic laparoscopic procedures for kidney cancer and found no statistical difference in outcome or length of hospital stay. A different 2017 study, published in JAMA, found no difference in the rate at which robotic or non-robotic surgeries for rectal cancers — operations that begin in both cases as minimally invasive surgeries — required a later, more invasive open surgery. A 2018 study published in The Lancet shows no significant differences in outcomes or complication rates in operations for bladder cancer. Essentially, robotic surgery is a solution in search of a problem.

Despite the evidence, many people still want robotic surgery. This is in part because it’s been marketed so much that people ask for it. To help with this misconception, the Affordable Care Act (ACA) established a new compensation model, called Accountable Care Organizations, that rewards doctors and hospitals for good results. Part of it includes pushing Medicare-certified hospitals to publicize information on how their patients fare. This information would let patients have more informed conversations about whether to undergo robotic-assisted surgery. This would lead hospitals to increasingly evaluate care in terms of value, defined as the quality of the medical outcome divided by the cost of treatment. It’ll put the squeeze on high-cost procedures, like robotic-assisted surgery, that don’t demonstrate any considerable advantages over cheaper alternatives. Also, insurance companies reimburse all minimally invasive surgeries, whether laparoscopic or robotic, at the same rates. Since robotic surgery generally costs anywhere from $3,000 to $6,000 more than traditional laparoscopic surgery, this would play a significant role in whether a hospital chooses to offer them. So, the only way hospitals recoup the cost of the robots is through volume. A robotic system costs roughly $2 million to acquire and is expensive to run since some of the attachments that go on the arms are disposable.

At a time when healthcare costs are skyrocketing, does it really make sense for hospitals to buy and use an expensive system when its effectiveness in many types of operations hasn’t been proven. Further research, and most likely improvements, need to be made to see if robotics surgery is as good as it’s been claimed to be. Until then, do your homework and talk to your doctor before scheduling any type of surgery.