Is it the cause of your child’s rash?

One morning when your daughter wakes up, you notice a rash on her face and she has a stuffy nose with a slight fever. She doesn’t seem overly sick, but by the next day, the rash has spread to more parts of her body. What is causing the rash? Is there anything you can do to treat it? 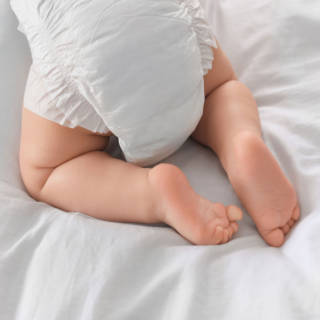 Rubella is also known as German measles or three-day measles. It’s caused by a virus that is spread through coming into contact with the respiratory secretions of an infected individual. This usually happens when an infected person coughs or sneezes and someone else inhales them or touches a surface the droplets landed on and then touches their face. It can also be passed from a pregnant woman to the fetus via the bloodstream. Rubella shares many of the same symptoms as the measles, but it’s not as infectious or severe. Symptoms usually start two to three weeks after exposure and include mild fever (102°F or lower), headache, stuffy/runny nose, inflamed/red eyes, aching joints (especially in young women) and enlarged/tender lymph nodes at the base of the skull, back of the neck and behind the ears. The most common symptom is a fine pink rash that starts on the face and quickly covers the torso and then arms/legs. The rash disappears in the same way. The contagious period is very long because it starts one to two weeks before the rash appears and ends one to two weeks after it arrived. So, a person can spread the virus without knowing it.

For the most part, rubella is a mild infection. However, in rare cases, it can cause ear infections and inflammation of the brain. One certain group that needs to very concerned about contracting the disease are pregnant women because the risk to their unborn child is significant. If you contract rubella during pregnancy, especially the first trimester, your child can have growth delays, cataracts, deafness, congenital heart defects, defects to other organs and intellectual disabilities. In addition, it can cause fetal death. 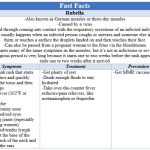 Since rubella is caused by a virus, antibiotics won’t treat it. Also, most infections are usually mild, which means they typically don’t need treatment. The best thing to do is to get plenty of rest and drink enough fluids to stay hydrated. Taking over-the-counter medications, like acetaminophen or ibuprofen, can help to reduce discomfort and alleviate fevers. The next most important thing is to isolate from others, especially pregnant women, in order to prevent spreading the disease to them. If you’re pregnant and contract rubella, talk to your doctor about options regarding treatment.

The best way to prevent a rubella infection is to get the vaccine. It’s part of the MMR (measles, mumps, rubella) vaccine. This is given in two doses with the first being done between the ages of 12 – 15 months and the second between 4 – 6 years old. The goal is to have both doses completed before the child enters school. For girls, being vaccinated against rubella is especially important to prevent any complications with future pregnancies. Anyone born after 1957 who doesn’t have proof of immunity, such as history of having rubella, vaccination records indicating that you have been vaccinated or laboratory confirmation of immunity, should receive the vaccine.

There have been many concerns that the vaccine causes autism. This has led to an increase in the number of people deciding not to give the vaccine to their children, which has resulted in a spike in the volume of cases in recent years. It’s critical to note that the idea of the link between the MMR vaccine and autism came from a single study done in 1998 that has been discredited numerous times since then by several reputable agencies, like the American Academy of Pediatrics, the National Academy of Medicine and the Centers for Disease Control and Prevention. Many experts point out that autism is usually diagnosed between the ages of 18 – 30 months, which is shortly after most children receive the MMR vaccine, but they say it’s not a cause, but merely a coincidence.

Rubella is an easily preventable disease; we just need to educate and encourage everyone to vaccinate themselves and their children. If you have any questions or concerns about rubella, please speak with your doctor. If you would like more information, please visit the Center for Disease Control and Prevention’s Rubella page at https://www.cdc.gov/rubella/index.html