A few years ago, SARS was in the news every where. There was a significant amount of concern regarding people traveling and spreading the deadly disease. Where did it come from? Why did it spread so quickly? Is it still an issue? 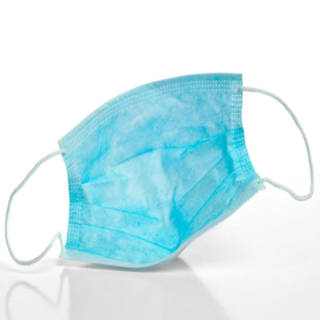 Severe acute respiratory syndrome (SARS) suddenly appeared in China in November 2002 and spread rapidly across the globe. It’s caused by a strain of the coronavirus, which is the same group of viruses that cause the common cold. In most instances, these viruses don’t usually pose a significant threat to people. However, some of the viruses can cause severe issues for animals. Due to it coming from out of nowhere, many scientists believe that SARS is a coronavirus that evolved from one or more animal strains and crossed over from animals to humans. The reason it passed on so quickly was because we live in a highly connected world and travelers who didn’t know they were infected transmitted it to others. SARS is like most other respiratory infections in that it’s spread via droplets that enter the air when someone who has the disease coughs, sneezes or talks and the droplets land on an uninfected person or on an object that an uninfected person comes into contact with.

SARS first presents with flu-like symptoms, including fever, chills, muscle aches, headache and diarrhea. After about a week, the symptoms evolve into a fever of 100.5°F or higher, dry cough and shortness of breath. People at greatest risk of developing SARS are those who have come into direct contact with an infected person. The reason that SARS is so deadly is that many people who come down with it end up developing pneumonia and their breathing problems worsen to the point that their respiratory system fails. Two other potential complications include heart failure and liver failure. The people most susceptible to SARS are individuals who are over the age of 60 and have underlying conditions, like diabetes or hepatitis. 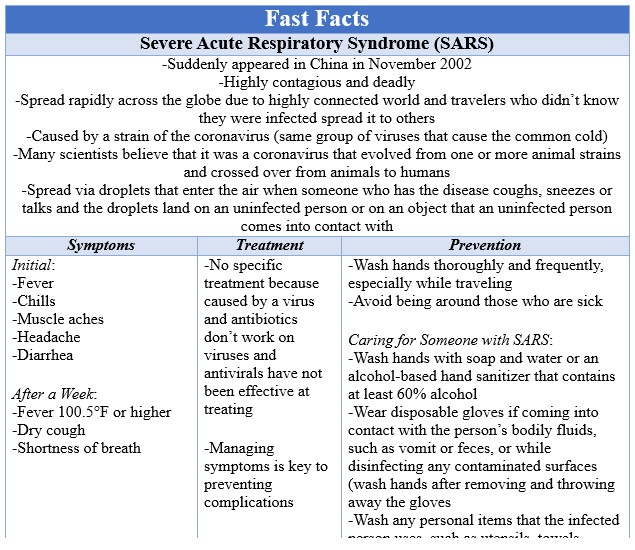 Unfortunately, there isn’t a specific treatment for SARS. This is because it’s caused by a virus and antibiotics don’t work on viruses. Antivirals were used in many of the cases, but didn’t have much effect. The best way that SARS is treated is by managing the symptoms. This gives your body the assistance that it needs to fight the infection. Due to the severity that can occur with the disease, this might mean being hospitalized and placed on a ventilator.

The good news is that there are now several laboratory tests that can help detect the virus that were not available when it first appeared. This is vital because the key thing is to get treatment early in order to decrease the chances of developing any complications, which are the main reason so many people die from SARS. So, if you have flu-like symptoms after traveling abroad, make sure you get seen by a doctor. Even though there hasn’t been a documented case of SARS anywhere around the world since 2004, it’s still a good idea to be checked if you are concerned.

Researchers are working on developing a vaccine for SARS, but so far, they haven’t been tested in humans. In the meantime, there are several things that you can do to decrease your risk of developing it. The most important thing is to wash your hands frequently and thoroughly, this is especially true if you are traveling. Try to avoid being around people that are visibly sick, such as someone who is coughing or sneezing. If you’re caring for someone who has SARS, it’s essential that you wash your hands with soap and water or an alcohol-based hand sanitizer that contains at least 60% alcohol. If you’re going to come into contact with the person’s bodily fluids, such as vomit or feces, wear disposable gloves. It’s also a good idea to wear gloves while disinfecting any surfaces that have been contaminated. Just remember to wash your hands after removing and throwing away the gloves. Any personal items that the infected person uses, such as utensils, towels, bedding or clothing, should be washed with soap and hot water. If you’re in the same room as the person who’s infected, wear a surgical mask that covers your nose and mouth. Wearing eye protection is another good idea. These prevent any airborne droplets from entering your body directly. It’s essential to follow these steps for at least 10 days after the person’s symptoms have gone away.

SARS is a very contagious and can be deadly, so it’s vital to take all necessary steps to prevent spreading or contracting it. If you have any questions or concerns about SARS, please speak with your doctor. If your would like more information, please visit the Center for Disease Control’s (CDC) SARS page at https://www.cdc.gov/sars/index.html