Most of us probably prefer not talking about STDs, but it is something that everyone needs the correct information about in order to be protected. While some STDs are more serious than others, no one wants to have one. This is why protection is key to prevention. What do you need to know about STDs to be safe? How do you know if you have one? How do you treat one? 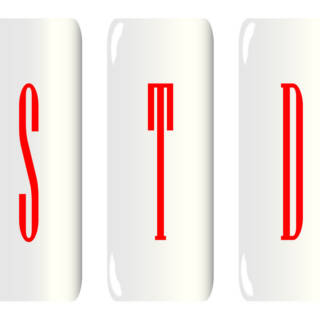 Sexually Transmitted Diseases (STDs), also called Sexually Transmitted Infections (STIs), can happen to anyone. It doesn’t matter if you are heterosexual, homosexual, single, or married. If you engage in any form of sexual activity (oral/vaginal/anal intercourse and genital touching), you’re vulnerable. Many STIs do not have any signs, and others have symptoms that aren’t necessarily obvious. STIs are broken down into three main groups: bacterial (chlamydia, gonorrhea, and syphilis), parasitic (trichomoniasis), and viral (genital herpes, human papillomavirus, hepatitis A/B/C, and HIV).

Chlamydia is a bacterial infection of your genital area and can be challenging to detect because there are no or minimal symptoms. If you have symptoms, they are often mild and start one to three weeks after exposure, which means they can easily be missed. Some of the symptoms associated with chlamydia are painful urination, lower abdominal pain, discharge from the vagina or penis, pain during intercourse (women), bleeding between periods (women), and testicular pain.

Syphilis is also a bacterial infection that presents with a small, painless sore (chancre) on the area of your body where the disease was transmitted, such as your genitals, rectum, tongue, or lips. Typically, only one chancre appears between 10 days and three months after exposure. It usually heals without any treatment. Unfortunately, the underlying disease remains, and other symptoms can occur 3 – 6 weeks after the chancre appears. Symptoms include rash marked by red or reddish-brown, penny-sized sores over any area of your body, fever, enlarged lymph nodes, fatigue, vague feeling of discomfort, and soreness/aching. These symptoms will disappear without any treatment within a few weeks or may reappear intermittently over the following year. This stage is known as secondary syphilis. After this stage, it is common to go through a period in which no symptoms are present, called latent syphilis. For some people, their syphilis stays in this stage. For others, it progresses to tertiary syphilis. Tertiary syphilis is often the result of people not receiving treatment during the other stages. Symptoms include lack of coordination, numbness, paralysis, blindness, dementia, and death.

Trichomoniasis is caused by a parasite and affects the urinary tract in men and the vagina in women. Men often don’t have any symptoms. If symptoms do appear, it’s within 5 – 28 days of exposure and can range from mild to severe. Symptoms include clear/white/greenish/yellowish vaginal discharge, discharge from the penis, strong vaginal odor, vaginal itching/irritation, penile itching/irritation, pain during intercourse, and painful urination.

Genital herpes is caused by a virus that enters your body through breaks in your skin or mucous membranes. It’s highly contagious, but most people don’t know that they have it because they don’t have any symptoms, or the symptoms are so mild they go unnoticed. One in four adults in America have genital herpes, and 80% don’t even know it. When symptoms do appear, the first episode is usually the worst. Some people never have another episode, whereas others have recurrent episodes for decades. Symptoms include small red bumps, blisters, or open sores in the genital, anal and nearby areas and pain/itching around the genital area, buttocks, and inner thighs. The sores can make it painful to urinate. Sometimes, people have flu-like symptoms with groin pain from swollen lymph nodes during the initial infection. Usually, symptoms appear a few weeks after exposure and will go away on their own.

The human papillomavirus (HPV) is very common and can place women at high risk for cervical cancer. Typically, it doesn’t have any symptoms, but some strains cause genital warts, which can have no symptoms or have symptoms including small, flesh-colored/gray swellings in your genitals, several warts close together that look like a cauliflower, itching/discomfort in your genitals and bleeding with intercourse. Warts can occur in the mouth or throat of the person if they have had oral sex with an infected person.

Hepatitis has many different strains, but the common are A, B, and C. While all are contagious, but B and C are the most serious. Hepatitis affects your liver and usually causes it to become inflamed. Some people don’t have any symptoms, but others experience fatigue, nausea/vomiting, abdominal pain/discomfort, loss of appetite, fever, dark-colored urine, muscle/joint pain, itching, and jaundice (yellowing of your skin and whites of your eyes).

Human Immunodeficiency Virus (HIV) interferes with your body’s ability to fight off infection from other viruses, bacteria, and fungi. If not treated, it can lead to AIDS (Auto-Immune Deficiency Syndrome), a life-threatening disease. There are no symptoms after exposure to HIV until 2 – 6 weeks later, when most people develop flu-like symptoms, such as fever, headache, sore throat, swollen lymph nodes, rash, and fatigue. These symptoms go away within a week to a month. The symptoms are very similar to other viral illnesses, so they are often mistaken for another illness. During this period, you’re highly contagious and can spread the disease without even knowing it. Even once you get over the initial infection, the virus multiplies and destroys your immune cells, meaning you’ll have mild infections or develop chronic symptoms, like swollen lymph nodes, diarrhea, weight loss cough/shortness of breath, and fever. Unfortunately, as HIV progresses, it typically leads to a weakened immune system that can’t fight off a simple infection, which results in death.

If an STI is left untreated, it leaves you susceptible to acquiring another STI, like HIV. You must regularly get examined by a doctor, especially if you have any concerns. It’s also essential to inform your partner or partners so they can be examined and treated, if needed. Bacterial STIs are treated with antibiotics. Sometimes, all it takes is one dose to cure the infection. Other times, you will be prescribed a course of antibiotics. You must follow the directions and finish all of the antibiotics. If you don’t, it can cause the bacteria to become resistant to the antibiotics, making them ineffective at treating the infection. Antibiotics or anti-parasitics are used to treat parasitic STIs. Viral STIs can’t be cured, but the symptoms are managed with anti-viral medications. This helps to control the virus for consistent periods. It doesn’t matter which type of STI you have; it’s vital to abstain from intercourse or any sexual activities until you have completed the treatment and have received negative test results.

While no method can 100% guarantee that you will not contract an STI, when condoms are used properly, they are highly effective at reducing the transmission of most of them. It’s also key to be seen regularly by a doctor to be screened for potential infections. Since many STIs have no or minimal symptoms, this step is vital to catch an infection in its early stages and prevent transmission to others. It’s essential to talk to your partner or partners about reducing disease risk. Also, if you don’t feel like doing something because you aren’t comfortable with the risk involved, don’t do it.

Sexually Transmitted Infections are something we all need to be aware of and do everything we can to prevent the transmission. If you have any questions or concerns about STIs, please speak with your doctor. If you would like more information, please visit the Center for Disease Control’s STD page at https://www.cdc.gov/std/default.htm