Why must it be treated?

You’ve probably heard of syphilis before. Most people assume that it’s a disease that isn’t around anymore. However, this isn’t true. The treatment for it has improved significantly, which is why there are fewer infections. What is this treatment? Why is it so important to get treated if you have an infection? How can you prevent it in the first place? 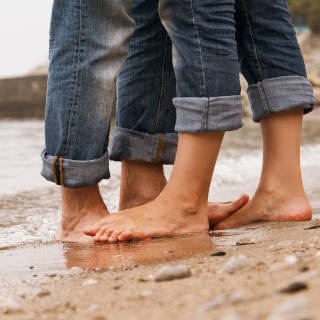 Syphilis is a sexually transmitted infection caused by the bacterium Treponema pallidum. Typically, the bacteria enter the body through minor cuts or abrasions in the skin or mucous membranes during sexual activity. It can also be passed from mothers to their babies during pregnancy or childbirth (congenital syphilis). Syphilis develops in stages: primary, secondary, latent, and tertiary. These stages can overlap and don’t always happen in the same order. There is also neurosyphilis.

Symptoms of syphilis vary depending on the stage. Some individuals are infected with the condition for years before noticing any symptoms. Primary syphilis is characterized by a small, painless sore, called a chancre, that appears at the spot where the bacteria entered your body. Typically, people only develop one chancre, but some develop many. They can be hard to notice because they may be inside the vagina or rectum. A chancre usually develops about three weeks after exposure and heals on its own within three to six weeks.

Secondary syphilis can start a few weeks after the original chancre heals. This stage causes a non-itchy rash that covers your entire body, including the palms of your hands and soles of your feet. The rash may be accompanied by wartlike sores in your mouth or genital region. Other symptoms can include hair loss, muscle aches, fever, sore throat, and swollen lymph nodes. This stage can last a few weeks or can repeatedly come and go for up to a year.

If you’re not treated for syphilis, it enters the latent stage, which means you don’t have any symptoms. This stage can last for years. Sometimes, the symptoms never return, or the condition can progress to the tertiary stage (about 15 – 30% of untreated individuals will develop it).

In tertiary syphilis, the disease can damage your brain, nerves, eyes, heart, blood vessels, liver, bones, and joints. Often, these symptoms don’t appear until many years after the initial infection. Neurosyphilis is when there’s damage to the brain, nervous system, and eyes. It can occur at any stage.

Newborns with congenital syphilis usually don’t have any symptoms, but some may have a rash on the palms of their hands and soles of their feet. Later symptoms can include deafness, teeth deformities, and saddle nose (the bridge of the nose collapses). Babies born with syphilis may be born too early, die in the womb, or die after birth.

Some things can increase your chances of contracting syphilis, such as engaging in unprotected sex, having sex with multiple partners, being a man who has sex with men, and being infected with HIV. Complications of syphilis usually occur if it’s not treated. Besides issues for pregnant women and their unborn children, it puts individuals at significant risk for contracting HIV, an estimated two- to fivefold increase. In the late stages, bumps (gummas) can appear on the skin, bones, liver, or any other organ. These typically go away with antibiotic treatment. The complications of the nervous system are numerous, including headache, stroke, meningitis, hearing loss, visual problems (blindness), dementia, loss of pain/temperature sensations, sexual dysfunction in men, and bladder incontinence. It can also cause your blood vessels, particularly your aorta (the body’s major artery), to bulge and swell and damage heart valves. 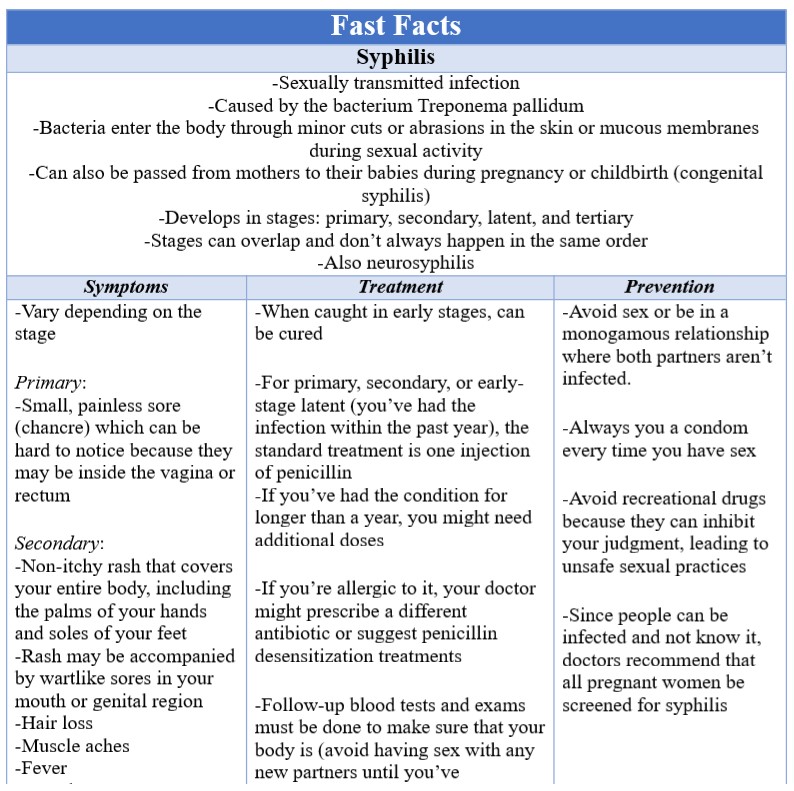 When caught in the early stages, syphilis can be cured. The preferred medication is penicillin, even for pregnant women. If you’re allergic to it, your doctor might prescribe a different antibiotic or suggest penicillin desensitization treatments. For primary, secondary, or early-stage latent (you’ve had the infection within the past year), the standard treatment is one injection of penicillin. If you’ve had the condition for longer than a year, you might need additional doses. It’s critical to note that even if you’re treated for syphilis during your pregnancy, your child should be tested and receive treatment if infected. Some individuals experience Jarisch-Herxheimer reaction the first day after receiving the injection. This has symptoms such as fever, chills, nausea, achy pain, and headache. It doesn’t usually last more than a day.

After you’ve been treated, your doctor will want you to do follow-up blood tests and exams to make sure that your body is responding to the treatment. The frequency and amount of follow-up will depend on the stage you’re diagnosed with. It’s essential to be tested for HIV and other sexually transmitted infections (STIs) during this time. Also, avoid having sex with any new partners until you’ve completed treatment and blood tests indicate that the infection is gone. It’s important to note that treatment can help prevent future damage but can’t fix or reverse the damage that’s already happened.

Understandably, finding out you have syphilis can be extremely upsetting. You might be angry thinking that your partner has betrayed you. However, it’s significant to realize that a past partner might have infected you or your current partner. This is why if you’ve tested positive for syphilis, your current sex partner and any partners you’ve had in the past year need to be notified so that they can get tested and treated (if necessary).

The only way to prevent syphilis is not to have sex or be in a monogamous relationship where both partners aren’t infected. Otherwise, the best way to prevent syphilis is to always you a condom every time you have sex. In addition, avoid recreational drugs because they can inhibit your judgment, leading to unsafe sexual practices. Since people can be infected and not know it, doctors recommend that all pregnant women be screened for syphilis since the effects on unborn children can be so devastating.

Being diagnosed with syphilis can be scary and overwhelming. However, when caught early enough, it can be cured! If you have any questions or concerns about syphilis, please speak with your doctor. If you would like more information, please visit MedlinePlus’s Syphilis page at https://medlineplus.gov/syphilis.html