One day when you get up from a chair, you notice that your legs are shaking slightly. You slowly start walking, and the tremor goes away. This continues to happen over the next several days. What’s wrong with your body? Are there more than one type of tremor? Can they be treated? 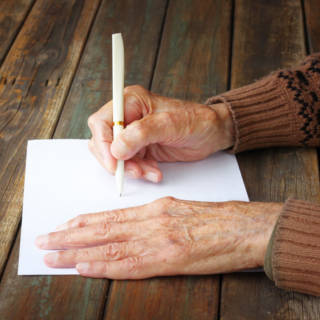 Tremors are an uncontrollable and unintentional movement of one part of your body. Usually, the movement is rhythmic and occurs at any time. They are different from muscle spasms and twitches. A muscle spasm is the involuntary contraction of the muscle (often called a muscle cramp). A muscle twitch is the uncontrolled fine movement of a small portion of a larger muscle (this can be visible underneath your skin).

Tremors are divided into two main types—resting and action. Resting tremors happen when you’re not moving (ex. sitting or lying). If you start to move around, they’ll go away. Action tremors occur during the movement of a specific body part. This type is divided into subcategories:

• Intention—appear during targeted movement (ex. trying to touch your finger to your nose).
• Postural—occur when holding a body part against gravity (ex. holding your arm outstretched).
• Task-specific—arise during a specific activity (ex. writing).
• Kinetic—start during movement of a body part (ex. moving your wrist up and down).
• Isometric—develop during the voluntary contraction of a muscle without other movements.

Tremors are also organized by appearance and cause. The most common are essential tremors. These are either postural or intention types and can be mild and progress slowly or doesn’t progress at all. If it does progress, it starts on one side of the body and over a few years affects both. Recent studies indicate that they’re related to mild degeneration of the cerebellum (the part of the brain that controls movement). Sometimes, they can cause walking difficulty or hearing disability. They tend to run in families. Parkinsonian tremors are a resting tremor that is usually the first sign of Parkinson’s disease. It appears after the age of 60 in most cases and is the result of damage to the movement control centers of the brain. Dystonic tremors occur in individuals with dystonia (a movement disorder that has involuntary muscle contractions). The tremors happen irregularly and can be relieved by rest. A cerebellar tremor is an intention type caused by lesions or damage to the cerebellum, often from a stroke, tumor, disease, alcoholism, or overuse of certain medications. Psychogenic tremors can present as any type of tremor. They’re distinguished by a sudden onset and remission, changes in the direction of your tremor and the affected body part, and greatly decreased activity when you’re distracted. Orthostatic tremors affect the legs most often and are a rapid, rhythmic muscle contraction triggered by standing. It might be observed as unsteadiness and is relieved when you sit, are lifted from a seated position, or start walking. Physiologic tremors result from a specific cause, such as certain drugs, alcohol withdrawal, or medical conditions (ex. low blood sugar). These will go away once the cause is treated. 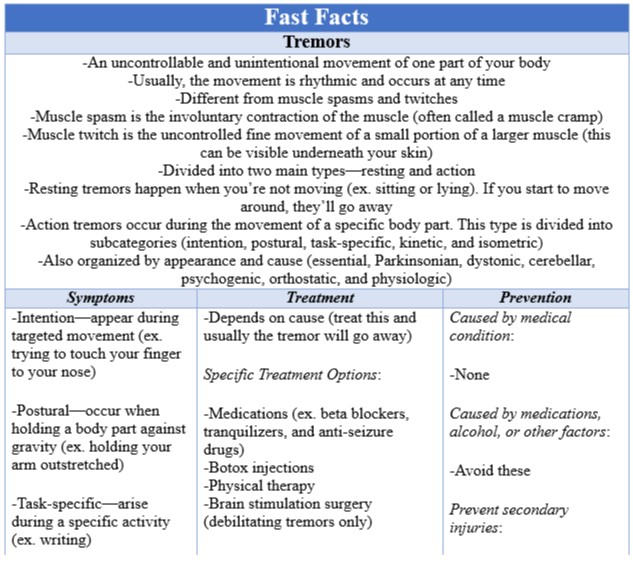 Tremors aren’t easily treated, and treatment depends on the cause. In some instances, tremors are considered normal. For example, if you’re experiencing anxiety or under a lot of stress, you can have a tremor. It’ll resolve once these feelings subside. If you have a medical condition that affects your brain, nervous system, or muscles, tremors could be a part of the disease process. Most likely, treating the condition will eliminate, or at least allow management of, the tremor.

There are some specific treatment options for tremors. Certain medications, such as beta blockers, tranquilizers, and anti-seizure drugs, are used to control tremors. Your doctor can help you decide which one would be best. Another option, especially for those with head and face tremors, is Botox injections. Some individuals benefit from physical therapy that’s focused on improving muscle strength and coordination. If you have a debilitating tremor, your doctor may recommend brain stimulation surgery. This involves inserting an electrical probe into the part of your brain causing the tremor, feeding a wire from it into your chest (under your skin), and placing a small device connected to the wire. The device sends pulses to the probe that stop the brain from generating the tremors.

When it comes to tremors caused by medical conditions, there isn’t a way to prevent them. For those induced by medications, alcohol, or other factors, the key is to avoid these. To avoid secondary injuries resulting from falling, take your time changing positions and use assistive devices, such as a cane or walker, to provide more stabilization.

Tremors can range from mildly annoying to incapacitating. There are ways to manage tremors so you can have the best life possible. If you have any questions or concerns about tremors, please speak with your doctor. If you would like more information, please visit the National Institute of Health’s National Institute of Neurological Disorders and Stroke’s Tremor page at https://www.ninds.nih.gov/Disorders/Patient-Caregiver-Education/Fact-Sheets/Tremor-Fact-Sheet