When you hear the word tuberculosis you probably don’t think much about it. You probably know that it can be a serious respiratory infection, but how do you get it? Did you know that some people are carriers of it but don’t have any symptoms? What makes it contagious? 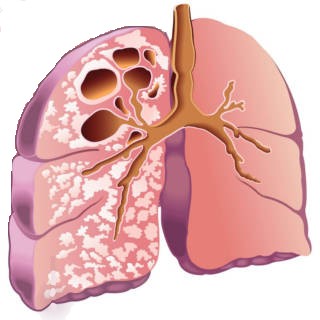 Tuberculosis (TB) is an infection that is caused by bacteria. It can affect many different parts of your body, such as your kidneys, spine, brain, joints, liver and heart, but it most commonly affects your lungs. There are two classification. Sometimes, you become infected with the TB bacteria but it remains in an inactive state, which means you don’t have any symptoms and aren’t contagious. This is known as inactive, or latent, TB. It’s roughly estimated that 2 billion people worldwide have this. The problem is that latent TB can turn into active TB. Active TB is when you are having symptoms and can spread the disease to others. Sometimes, it occurs within a few weeks after you’ve been infected or can occur years later. TB is spread when an infected person coughs, speaks, sneezes, spits, laughs or sings and tiny droplets are released into the air. An uninfected person then inhales these droplets causing them to become infected. While this might seem like you are at risk of catching TB wherever you go, this isn’t the case. Usually, you get it from someone that you live or work with—someone that you spend time with in a small, indoor space.

The main symptoms of an active infection include a cough that lasts more than three weeks, coughing up blood, chest pain (especially with breathing or coughing), unintentional weight loss, fatigue, fever, night sweats, chills and loss of appetite. You should definitely see your doctor if you have a cough and fever with night sweats and unexplained weight loss because when experienced together, they often indicate a TB infection. Certain groups of people are at increased risk for a TB infection, such as those with a weakened immune system, being very young or old, traveling to or living in certain places, living in poverty, using drugs, smoking and working in an environment that exposes you to individuals with TB. Numerous medical conditions can weaken your immune system, like diabetes, severe kidney disease, cancer, malnutrition, certain medications/treatments and HIV/AIDS. During the 1980s, when the number of individuals with HIV/AIDS grew quickly, so did the number of TB cases. Children and the elderly have immune system that don’t function the same as healthy adults, which is why they are at increased risk. Some places, like Africa, Eastern Europe, Asia, Russia, Latin America and Caribbean Islands, have higher incidences of TB. So, if you are traveling to any of these areas, you should be aware of your surroundings and stay away from people who are visibly sick. Certain living conditions, such as poverty, increase your risk because you are unable to afford healthcare and proper nutrition to support a healthy immune system. Some places, like prisons, immigration centers, refugee camps, shelters and nursing homes, put individuals at a higher risk because often there is overcrowding, unsanitary conditions and poor ventilation. The use of drugs, alcohol and smoking also significantly weaken your immune system making you more susceptible. Healthcare workers are at increased risk of developing TB because they are more likely to be exposed to individuals who have it than nonhealthcare workers. 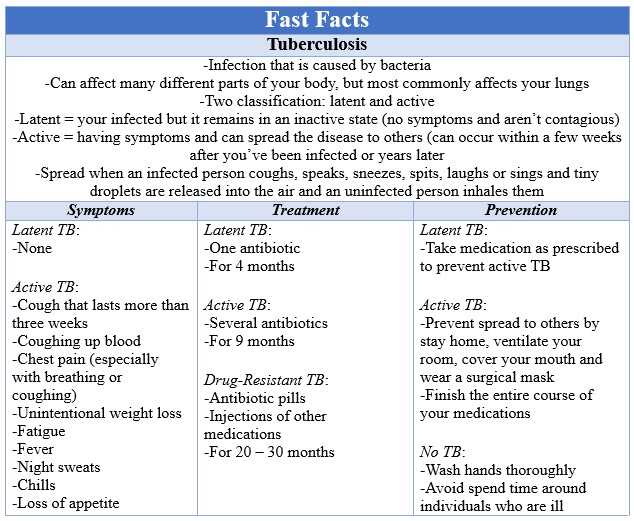 The tuberculosis bacteria are very powerful and requires antibiotic treatment much longer than most infections. The normal antibiotic treatment course is six to nine months long with the exact type of medication and duration depending on your age, overall health, form of TB (latent or active) and the body part that is affected by the infection. If your infection is discovered during the latent period, the new recommendation is to take antibiotics for four months to help prevent it from becoming active. The other major concern is that many strains of the TB bacteria are becoming resistant to the antibiotics that used to treat it. This is when an antibiotic fails to kill all of the bacteria and the surviving bacteria become resistant that particular medication and, unfortunately, other medications too. There are certain antibiotics designed to treat these resistant bacteria, but some strains of TB are starting to become resistant to these as well. The main reason this resistant develops is that people start taking antibiotics and within a couple of weeks feel better, so they stop taking the antibiotics even though they haven’t finished all of the pills that were prescribed to them. The treatment for drug-resistant TB is much more intense than latent or active. Latent TB requires usually just one antibiotic for a few months, active requires taking several medications for several months and drug-resistant requires taking not only pills but getting injections for 20 – 30 months. All of these medicines can be toxic to your liver. While taking them, if you have nausea/vomiting, loss of appetite, jaundice (yellow hue to your skin), dark urine or fever that doesn’t have a cause and lasts longer than three days, you should see your doctor immediately.

If you’re having symptoms of TB, your doctor will most likely do a chest x-ray. This will show if there are any abnormalities within your lungs. Also, your doctor will ask for a sputum (the mucus you bring up when you cough) sample because they will use this to identify the strain of TB that is causing your infection, which helps them determine what medications to use for treatment. If you are not having symptoms of TB, but your doctor thinks that you are at high risk, they may order a skin test to see if you’ve been exposed. This is done by injecting a small amount of PPD tuberculin under your skin on the inside of your forearm. After 48 – 72 hours, a healthcare professional will need to look at your arm to check for swelling at the injection site. If you have a TB infection, you’ll have a hard, raised red bump. It’s possible for the test to be wrong and get either a false positive or false negative result. If you have a positive result or your doctor is concerned that you got a false negative, they can order a blood test to make sure you know for sure whether you have a TB infection. You might have a false positive test if you’ve received the TB vaccine, bacillus Calmette-Guerin (BCG), because it causes your body to make antibodies which react to the PPD tuberculin. This vaccine is given to infants in countries that have high infection rates of TB. It’s not affected at preventing adults from getting TB. Scientists are working on developing a vaccine for adults.

If you’ve got latent TB infection, you should take medications to reduce your risk of developing an active infection. The only type of active TB that is contagious is when it affects the lungs. If you have active TB, it’s vital to take steps to protect your family and friends. Since it can take a few weeks after starting the medication regimen to not be contagious, be sure to stay home, ventilate your room by opening windows (if it’s not too cold) and blowing air outside with a fan and cover your mouth with a tissue when you laugh, cough or sneeze to prevent droplets from being released into the air. If you do interact with other people, wear a surgical mask. The most important thing you can do is to finish the entire course of your medications. If you’ve been exposed to someone with TB, let your doctor know and they will advise you on next steps to monitor your condition to see if you have contracted the bacteria. A good rule of thumb to prevent yourself from getting TB is to wash your hands thoroughly and try to avoid being around sick people as much as possible.

Tuberculosis isn’t something that you want. By taking the proper precautions, you should be able to prevent yourself from getting sick. If you have any questions or concerns, please speak with your doctor. If you would like more information, please visit the Center for Disease Control (CDC) tuberculosis page at https://www.cdc.gov/tb/topic/basics/default.htm