Why you should be concerned about it becoming drug-resistant?

You have probably heard about tuberculosis at some point before, but did you know that it the number one cause of death from an infectious disease and it affects about a third of the world’s population? Probably not. While most of us don’t think about tuberculosis, it has been making the news lately due to the fact there are strains of it that are now resistant to the antibiotics that are used to treat it. Why is this concerning? 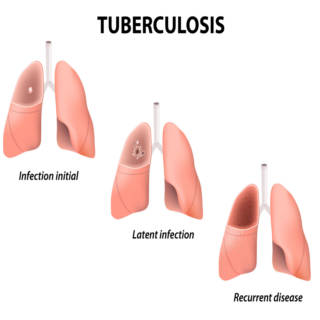 Tuberculosis is not a new disease. While the it might not have been identified and named until the mid-1800s, there is evidence of it the remains of prehistoric humans from 4000 BC and it has been documented in the Americas since 100 AD. Tuberculosis is most commonly caused by a bacterium, Mycobacterium tuberculosis, and most often affects the lungs of the people who are infected. There are two stages of tuberculosis—latent and active. The majority of infections have no symptoms and are considered latent. You might find out that you have a latent infection if you have tuberculin skin test and it comes back positive. If this is the case, your doctor can monitor your condition and prescribe medication if necessary. It is estimated that somewhere between 5 – 10% of Americans test positive via the skin test. Only about 10% of latent cases progress to active tuberculosis. If it does and it isn’t treated, it kills half of the people who reach this stage. Symptoms of active tuberculosis include chronic cough with bloody sputum (mucous), fever, night sweats and weight loss. Only people with active tuberculosis can spread the disease to others. It is spread by those who have active tuberculosis spending extended periods of time with someone who isn’t. The exposed person is at risk for inhaling airborne droplets that are typically expelled from the sick person’s coughing. The droplets are microscopic and can remain suspended in the air for several hours. After exposure, people are at a higher risk for acquiring latent tuberculosis. Some people are at increased risk for developing active tuberculosis, including those who smoke or have immune-compromising diseases (HIV/AIDS). The best way to prevent tuberculosis is through early screening of high risk people, especially those who live, work or been exposed to a person with active tuberculosis. Vaccination of people in high risk areas is also key. The first vaccine for tuberculosis was developed in 1906 by two French scientists, therefore, it was named after them. The bacille Calmette-Guérin (BCG) vaccine was first used on humans in 1921 but didn’t gain widespread use until after World War II. While this helped to prevent the spread of tuberculosis, it was the development of the streptomycin antibiotic in 1946 that lead to a breakthrough in treating and, in most cases, curing it after the infection transitioned to active tuberculosis case. Unfortunately, by the late 1980s, it was discovered that there were strains of tuberculosis that were becoming resistant to the antibiotics used to treat it. This lead the World Health Organization (WHO) to declare tuberculosis a global health emergency in 1993. Sadly, since then, the situation has only gotten worse.

The majority of deaths (>95%) from tuberculosis occur in developing countries. According to the WHO, people with drug-resistant tuberculosis who seek treatment only have a 1 in 4 chance of successfully defeating the infection. It may seem that tuberculosis isn’t something that we need to worry about, but we should be because the number of infections in the United States has been increasing. In March 2018, the New York City Health Department released a report that indicated a 10% increase of tuberculosis cases in 2017. This incredibly significant since it was the largest number of cases in one year since 1992. With the increasing prevalence of drug-resistant tuberculosis, this is even more concerning. Typically, tuberculosis affects areas where people are confined close together the hardest. This is why it most often is seen in individuals who live in poverty-stricken areas or are incarcerated. This fact directly impacts people’s ability to survive an infection. The treatment of a non-drug-resistant tuberculosis case requires several months of strict antibiotic regimen to cure it, the lengthy and costly process is worth it knowing the outcome. When you look at the treatment for an extensively drug-resistant tuberculosis case, it can take 18-24 months and can cost over $500,000. Obviously, the individuals who are most affected by tuberculosis do not have the means to pay for the treatment, so it is usually covered by local health departments. For some smaller health departments, one case could be their entire budget for the year. The Center for Disease Control (CDC) has a Division of Tuberculosis Elimination that works with local public health departments to monitor tuberculosis outbreaks and provide guidance on how to handle them, but it doesn’t have adequate funding to help them cover the cost of tuberculosis treatment. In order to correct this, Congress would need to set aside funds that allow the CDC to help cover these costs. Also, the CDC should take a more active role in locating and monitoring tuberculosis patients that move from one area to another since local health departments don’t have the resources to do this either.

There are two areas that we should be focusing on treatment and prevention. Obviously, treatment is important in helping heal people who are actively sick with tuberculosis. However, the treatment is long, difficult and not very effective, so while it is important, the key to stopping an epidemic from occurring is prevention. This should include doing a better job screening people who are high risk and increasing the number of people receiving vaccinations. We need to remember that tuberculosis doesn’t have any borders. It doesn’t matter whether you’re rich or poor, educated or vote for a specific political party, it affects all of us the same. We need to have a better way to treat and prevent tuberculosis from spreading because if we don’t the number and severity of tuberculosis cases will only get worse.