Yes, it’s still out there!

You’ve recently got back from an awesome vacation. Several days after you get home, you start having a headache with weakness and stomach pain. Next, you develop a fever that seems to gradually be getting worse. Why are you having these symptoms? What can you do to feel better? 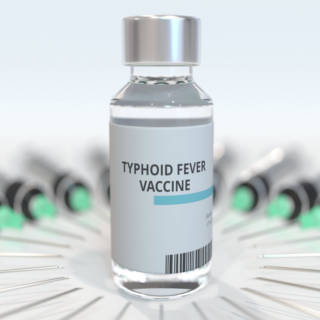 Typhoid fever, or enteric fever, is caused by the bacteria Salmonella typhi. Although it’s related to the bacteria that cause salmonellosis, they aren’t the same bacteria. It’s a serious worldwide threat and affects around 26 million people each year. In developing countries, like India, Southeast Asia, Africa and South America, it’s very common. It’s spread through the feces and, sometimes, urine of infected individuals. If you ingest food or water that’s been handled by an infected person who didn’t thoroughly wash their hands after using the toilet, you can become sick. In developing countries, it’s common in drinking water because of poor sanitation. Sometimes, it’s spread through direct contact with an infected person.

Symptoms start gradually and appear about one to three weeks after exposure. Early symptoms include a fever that starts low and increases daily (in some cases, it can get up to 104.9°F, headache, weakness/fatigue, muscle aches, sweating, dry cough, loss of appetite, weight loss, stomach pain, diarrhea/constipation, rash and extremely swollen abdomen. Some people have a return of symptoms up two weeks after the fever has gone away. If you don’t get treatment, you can become delirious, end up in the typhoid state (lying motionless with your eyes half-closed) and develop life-threatening complications. The most serious complication is bleeding or perforation (holes) in your intestines. When your intestine is perforated, it causes intestinal fluid to leak into your abdominal cavity. This can result in a life-threatening infection in your bloodstream called sepsis. Symptoms of a perforated bowel are severe abdominal pain, nausea and vomiting. Other complications are myocarditis (inflammation of your heart muscle), endocarditis (inflammation of the lining of your heart and valves), pneumonia, pancreatitis, kidney/bladder infections, meningitis, delirium, hallucinations and paranoid psychosis. Without treatment, people who experience complications often die.

Children are at greater risk of catching the disease, but they often have milder symptoms than adults. Obviously, if you live in a country where typhoid is common, then you’re more likely to become infected. For those who don’t live in these areas, your risk level is elevated when you work or travel in these regions. Your risk is also raised if you have close contact with an infected person or drink water contaminated by sewage that has the bacteria in it. 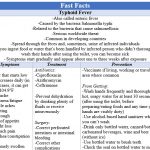 The best way to get rid of typhoid fever is to get prompt treatment with antibiotics. The most commonly used for nonpregnant adults is ciprofloxacin. However, there are strains of the bacteria that are becoming resistant to this medicine. So, if this is the case, you’ll be given another antibiotic called azithromycin (this is also used if you have an allergy to ciprofloxacin). Both of these are usually given as pills. In the event that it’s a more serious infection or for children, there is an injectable antibiotic, ceftriaxone. Other medicines, like chloramphenicol, ampicillin and trimethoprim-sulfamethoxazole, were used in the past, but the bacteria became resistant to them. The other key element in treating typhoid fever is to prevent dehydration by drinking plenty of fluids. Sometimes, this involves receiving them through a vein (intravenously). If you have a perforated intestine, then you’ll need to have surgery to correct it.

It’s important to note that some individuals recover from typhoid fever with or without the use of antibiotics, but continue to carry the bacteria inside their body. It can remain inside their intestinal tract or gallbladder for years. These individuals are known as chronic carriers and are able to spread the bacteria to others even though they don’t have any symptoms. One of the first known cases of this occurred in the Northeast with a woman named Mary Mallon. She is better known as “Typhoid Mary.”

For areas where typhoid is common, the goal should be to prevent it by improving water sanitation and providing adequate medical care. If you’re going to be living or traveling to one of these areas, you should get vaccinated. There are two types. The first is an injectable, signal dose that you should get at least one week before you travel. The other is four pills that you take every other day until they’re gone. Unfortunately, neither one is 100% effective and you must be revaccinated since the effectiveness decreases over time.

In addition to getting vaccinated, it’s essential to follow some safety precautions. The most important of these is to wash your hands frequently and thoroughly in hot, soapy water for at least 30 seconds. You should do this after using the toilet, before preparing/eating foods and any time your hands are visibly dirty. If you don’t have access to soap and water, use alcohol-based hand sanitizer. When visiting other places, it’s a good idea to drink only bottled water, canned/bottled carbonated beverages, wine and beer. Your drinks shouldn’t have ice either. When brushing your teeth, use bottled water. When purchasing bottled water, check the seal to make sure that it’s not been broken, sometimes people in developing countries will take used bottles and fill it with local water in order to sell it to make money. Avoid raw fruits and vegetables since they’re often washed in water that may be unsafe. Stay away from foods that are stored or served at room temperature because there is no way to kill the bacteria on them. Instead, eat foods that hot and aren’t from street vendors.

If you have typhoid fever, there are steps you can take to prevent spreading it to others. The first is to take all of your antibiotics as prescribed until they’re gone. This will help completely eliminate the bacteria from your body and prevent the development of resistant strains. Next, wash your hands frequently and thoroughly (the same as if you were trying to not contract the disease). Don’t prepare food for others until your doctor says you’re no longer contagious.

Typhoid fever is a serious illness that can be treated with good results if you catch it early enough. The best thing to do is to take steps to prevent it. If you have any questions or concerns about typhoid fever, please speak with your doctor. If you would like more information, please visit the Center for Disease Control and Prevention’s (CDC) typhoid fever page at https://www.cdc.gov/typhoid-fever/index.html