Is there a difference?

You’ve heard the term vaping before and know that it’s something similar to cigarettes but don’t really know the difference. Also, you know smoking cigarettes is bad for you, but what about vaping? What is in the vapor? 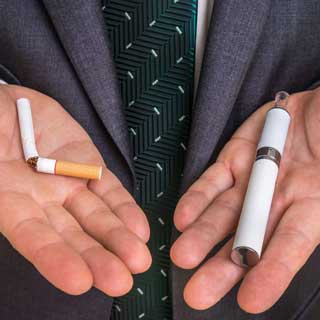 Cigarette smoking involves putting tobacco and other products in small piece of paper rolling them together, lighting the end of the cigarette and then inhaling the smoke from the cigarette. This smoke contains over 7000 chemicals with 69 of them being known carcinogens (cancer causing). The reason a cigarette habit is hard to put down is because there’s nicotine in them. Nicotine is addictive and when you consume it, it affects the pleasure centers of brain giving you a happy sensation. The problem with cigarettes is that it isn’t just nicotine that is in them. They also have tar, carbon monoxide, formaldehyde, ammonia, hydrogen cyanide, arsenic and DDT (just to name a few) in them. Cigarette smoking is the leading preventable cause of death in the United States, according to the Center for Disease Control (CDC). Please visit their smoking fact sheet at: https://www.cdc.gov/tobacco/data_statistics/fact_sheets/health_effects/effects_cig_smoking/

So, where does vaping fit in? Vaping uses an electric device, or vaporizer, to inhale water vapor. This vapor usually, but not always, contains nicotine and some other chemicals, but is tobacco free. The vapors also come in a wide variety of flavors, which broadens their appeal. One of the chemicals contained in the vapor is propylene glycol, which has been found that when heated and vaporized it degrades into formaldehyde and acetaldehyde (both carcinogens).

Even if vaping doesn’t have the same number of chemicals as cigarettes, it still has nicotine which is dangerous by itself. Nicotine has been proven to cause lung cancer, other cancers, heart/circulatory problems, diabetes, eye problems, infertility/impotence, pregnancy/newborn complications, teeth/gum disease, physical appearance changes (premature aging/wrinkles), weakened senses and increased number of respiratory illnesses (cold, flu, etc.). In any regard, smoking or vaping exposes you to nicotine and that isn’t good for your health.

It can be really hard to quit smoking/vaping and many of those people who do quit make several failed attempts. Smoking/vaping is often associated with social activities, therefore, when you are partaking in those activities, you will be more inclined to smoke/vape. This can be while at a certain place or with certain people, drinking alcohol, after a meal, certain times of day, stressful situations or driving. It is important to understand what your trigger is in order to be able to avoid it. There are several different kinds of medications to help stop smoking/vaping, some are even over-the-counter (you don’t need a prescription to buy them). An important step in the quitting process is to seek counseling because it has been found that those who do are more likely to quit initially and are less likely to return to smoking/vaping after quitting. It’s key to wait out cravings by keeping your mouth and hands busy, such as a stress ball, during them (they usually last less than five minutes).

Obviously, the best way to never have to worry about quitting smoking or vaping is to never start. It has been proven that children who have parents or friends who smoke are more likely to smoke as teenagers and adults. This is why it is important to talk to children early and often about not smoking/vaping and for parents to know if their children’s friends do. The best thing that you can do is lead by example and don’t smoke/vape yourself.

It isn’t easy to quit smoking/vaping and if you would like help during the process, please talk to your physician or call the National Network of Tobacco Cessation Quitlines at 1-800-QUIT-NOW (1-800-784-8669). You can be smoke/vape free!