Why is your heart rhythm different?

An arrhythmia isn’t something that you usually have to worry about. Some of them can occur without you even knowing you have one. Others are life-threatening and need immediate medical treatment. What exactly is an arrhythmia? How do you know whether the type you have is serious? What can be done to correct it? 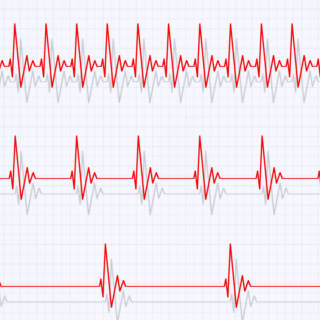 An arrhythmia is when the electrical impulses that regulate your heart rate isn’t functioning the way it should and causes your heart to beat too fast, slow or irregularly. These changes in the rhythm can cause a fluttering feeling in your chest, feeling like your heart is either racing or going too slow, palpitations, chest pain, sweating, shortness of breath, lightheadedness, dizziness or fainting. Due to the wide variety of arrhythmia types, there are numerous possible causes. Some of the more common are if the person is currently having a heart attack, scar tissue from a prior heart attack interrupts the normal flow of electrical impulses, changes to your heart’s structure, coronary artery disease, diabetes, sleep apnea, electrolyte imbalance, high blood pressure, thyroid problems (either over or under active), congenital heart problems, smoking, drinking too much alcohol/caffeine, abuse of drugs, taking certain medications, being under a lot of stress and family history of arrhythmias or other heart problems.

Most arrhythmias are classified by the rate and where it originates from, either the top or bottom parts of your heart. Typically, your normal resting heart rate is between 60 – 100 beats per minute. If your resting heart rate is above 100, it’s called tachycardia and if it’s below 60, it’s called bradycardia. Your heart has four chambers with two atria on top and two ventricles on the bottom. In order for them to pump blood throughout your body, they need to receive a signal to contract at the right time. This is under control of the electrical pathway of your heart that starts in the sinus node, which is located in your right atrium. Once the sinus node initiates the electrical process, it moves across the atria and signaling the muscles to contract, which sends the blood that is in them into the ventricles. The electrical signal reaches the atrioventricular (AV) node, which slows the impulse down slightly before sending it the ventricles. This allows the ventricles to receive the blood from the atria before getting the signal to contract and sending that blood throughout your body.

Tachycardic rhythms are divide into those that start in your atria versus those that start in your ventricles. The ones that start in your atria are atrial fibrillation, atrial flutter and supraventricular tachycardia. Atrial fibrillation (AFib) is when there are chaotic electrical impulses in your sinus node signaling the atria to rapidly contract. These contractions are uncoordinated and weak, which means that the blood in your atria isn’t usually pumped into the ventricle like it’s supposed be. Instead, the blood pools in the atria and increases your risk for developing a blood clot. These abnormal electrical impulses also effect the AV node, which tells your ventricles to rapidly contract at an irregular rate (not usually as fast as your atria though). Atrial flutter (AFlutter) is like atrial fibrillation in cause, but the rhythm is less uncoordinated. Supraventricular tachycardia (SVT) is the term used to describe any other type of arrhythmia that starts above the AV node and ventricles. One example of this is Wolff-Parkinson-White (WPW) Syndrome. Tachycardic rhythms that start in the ventricles are usually more serious because they typically more life-threatening and include ventricular tachycardia, ventricular fibrillation and long QT syndrome. Ventricular tachycardia (VTach) is similar to atrial fibrillation in that there are chaotic electrical impulses signal the ventricles to rapidly contract, but the origin of the impulses comes from the AV node rather than the sinus node. Just like in AFib, these contractions are uncoordinated and weak, so your ventricles aren’t able to pump a sufficient amount of blood to the rest of your body. If VTach isn’t treated quickly, it can turn into ventricular fibrillation. Ventricular fibrillation (VFib) is when the abnormal electrical impulses are occurring so rapidly that your ventricles don’t have time to contract at all, so they are just quivering and there is no blood being pumped out of them. If this isn’t corrected within a few minutes, it’s usually fatal. Long QT syndrome is a disorder that increases your risk for developing fast, frenzied heartbeats that result in fainting or, in some cases, sudden death. It is most often the result of a genetic mutation, congenital heart defect or taking certain medications. A premature heartbeat is when you have an extra beat (might feel like your heart skipped a beat) and are often caused by stress, strenuous exercise or stimulants. It isn’t uncommon for these to happen occasionally and doesn’t usually indicate that you have a serious problem. The concern is that if you have a history of heart disease or another underlying risk, a premature heartbeat can elicit an arrhythmia.

It’s important to note that having a bradycardic heart rhythm doesn’t necessarily signify a problem. For very athletic people, it isn’t uncommon for them to have a normal resting heart rate that is below 60 beats a minute. Also, one the side effects of certain medications is having a lower heart rate. Concern arises when your heart rate is slow and your body is unable to pump enough blood throughout your circulatory system. Sick sinus syndrome is when your sinus node isn’t sending the electrical impulses correctly resulting in your heart rate being too slow or causing an intermittent speeding up and slowing down of the rate. Sometimes, this is the result of scar tissue near the sinus node blocking the travel of the electrical impulses. A conduction block is similar in that electrical impulses are being blocked or delayed but location is usually somewhere closer to the AV node or down the individual ventricle electrical pathways. 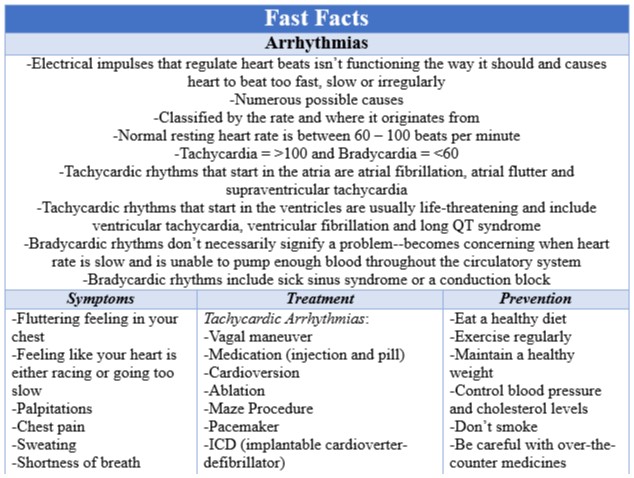 The treatment for arrhythmias depends on the type. For tachycardic rhythms there are several options. The initial thing that your doctor might try is called a vagal maneuver. They will instruct you to cough, bear down like you’re having a bowel movement or put an ice pack on your face. All of these techniques stimulate your vagus nerve, which helps to regulate your heartbeat. If this doesn’t help (it isn’t effective for all types of tachycardia), your doctor might need to give you an injection of an anti-arrhythmic medication to change your heart rhythm. If the injection works, they will probably prescribe an oral medication for you to take to help keep your heart rhythm under control. If the injection doesn’t work, your doctor might try a procedure called a cardioversion, which is where they send an electrical signal to your heart by placing patches on your chest and send a shock through them to your heart. This should return your heart to a normal rhythm. One of the permanent solutions is called an ablation and is when a catheter is inserted into one of your blood vessels and guided to your heart. Once in position, the tip of the catheter is heated so that it destroys the tissue to create a block along the electrical pathway that is causing the problem. Another possible surgical option is called a maze procedure and is where a surgeon makes a series of surgical incisions in the heart tissue in the atria to create a pattern or maze of scar tissue. This is very effective, but is usually reserved for people who don’t respond to other treatments since it involves open heart surgery. Your doctor may also recommend implanting a device that can help control abnormal heart rhythms, such as a pacemaker or implantable cardioverter-defibrillator (ICD). Both devices are small and usually placed under your skin near your collarbone. From the device, there is an insulated wire that extends to your heart and is permanently anchored to it. A pacemaker can be used for either tachycardic or bradycardic rhythms (it’s usually the only form of treatment for bradycardic rhythms that don’t have an underlying cause that can be corrected). If it detects either type, it will send an electrical impulse to your heart signaling it to beat at a normal rate. An ICD is used if you’re more likely to have VTach, VFib or sudden cardiac arrest because it has the ability to emit low or high energy shocks to reset your heart to a normal rhythm (much like using external cardioversion). Besides these interventions, your doctor will recommend that you make lifestyle changes in order to improve your heart health. These changes are the same as prevention techniques, so we’ll take a close look at them in the next section.

The best way to prevent any arrhythmia from occurring is by living a heart healthy lifestyle. One of the key steps to doing this is to eat a diet that’s low in salt and solid fats, but rich in fruits, vegetables and whole grains. It’s also essential to increase your level of physical activity with the goal being to build up to doing some form of exercise daily. By doing both of these things, you’ll be able to maintain a healthy weight, which is vital since being overweight increases your chances of having heart disease. Also, eating healthy and exercising will help you to keep your blood pressure and cholesterol levels under control. If you smoke, quit. If you don’t smoke, try to avoid being around people who do because secondhand smoke is also bad for your health. When using over-the-counter medications, such as some cold and cough medications that contain stimulants, be careful because they can trigger a rapid heart rate. If you drink alcohol or caffeine, do so in moderation. It’s critical to reduce the amount of stress in your life. Participating in activities, like yoga, meditation and relaxation techniques, can be extremely beneficial. There has been some thought that acupuncture and omega-3 fatty acids might be helpful in reducing and preventing arrhythmias, but further research is needed.

Having any sort of arrhythmia can come as a shock, especially if it’s one that is life-threatening. The good news is that there are ways to manage them so you can live a healthy life. If you have any questions or concerns about arrhythmias, please speak with your doctor. If you would like more information, please visit the National Heart, Lung, and Blood Institute’s arrhythmia page at https://www.nhlbi.nih.gov/health-topics/arrhythmia