If you hear the term ALS, what is the first thing that you think of? For some, it might be Lou Gehrig. Others might think of Stephen Hawking. Still others, might think of the ice bucket challenge. Unless you personally know someone with ALS, most us don’t really know what it is and the significant impact it has on the lives of the people it effects. So, what is it? How is it treated? 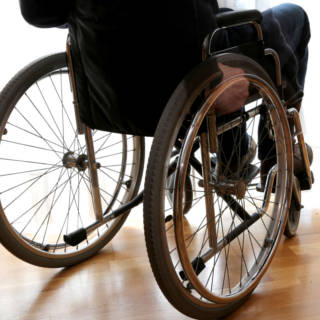 Amyotrophic lateral sclerosis (ALS) is a disease that affects the nervous system causing the cells to gradually break down and, eventually, die. Due to the way the disease progresses, it gets worse over time and causes severe disabilities for those afflicted by it. No specific cause has been identified; however, it is estimated 5–10 % of the cases are inherited. There are several other possible causes being researched. Genetic mutation is one consideration. Another is chemical imbalances because people with ALS have high levels of glutamate, which helps to transmit messages around the brain and too much of it has been shown to be toxic to some types of nerve cells. Some researchers think that when your immune system doesn’t function properly, it attacks a person’s normal cells and this can lead to nerve cell death. There is also thought that when proteins are misused by nerve cells this cause them to accrue in the cells, which ultimately destroys them. Whatever the cause is, most people die three to five years after ALS symptoms first appear.

Since ALS is a progressive disease, it starts out with mild symptoms that worsen over time. Some of the most common initial symptoms include intermittent muscle twitching, weakness in one limb or slurred speech. Over time, symptoms include difficulty walking/doing everyday activities, tripping/falling, weakness in a whole limb or part of one, weakness in your hands that cause you to be unable to grasp things, difficulty swallowing, muscle cramps due to the twitching and difficulty hold head up/maintaining proper posture. ALS doesn’t affect your bowel/bladder function, senses or capability to think. As the disease progresses to later stages, it can cause breathing complications from the muscles you use to breathe becoming paralyzed after the nerve cells in that area no longer function. Due to this, respiratory failure is the most common cause of death for people with ALS. Besides breathing difficulties, people eventually lose the ability to speak or eat. Also, memory loss and decreased decision-making abilities are common resulting in dementia. 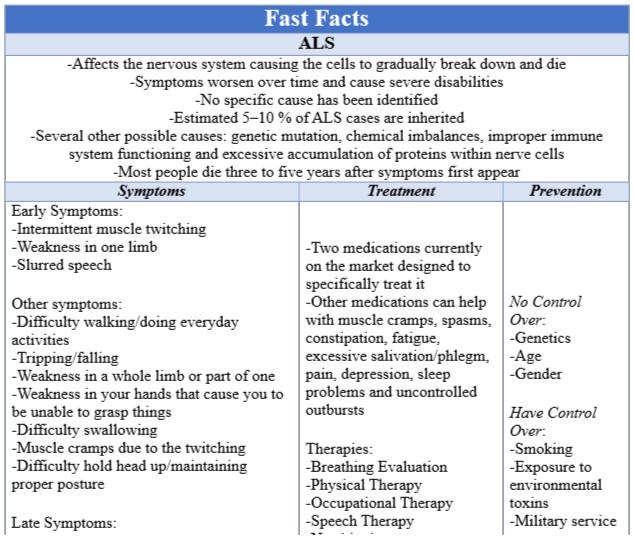 ALS can be diagnosed from a variety of methods, but the impairment can’t be undone. Thankfully, there are some options to help slow the progression and decrease the likelihood of complications. Both of these allow people with ALS to have a more independent and comfortable lifestyle longer than they would be able to without any treatment. There are two medications currently on the market designed to specifically treat it. One is a pill that is thought to help lessen the amount of glutamate in the person’s brain. The other is an intravenous (IV) infusion that has been shown to help preserve the person’s ability to participate in activities of daily function for longer periods of time. In addition to these, doctors can prescribe medications to help with muscle cramps, spasms, constipation, fatigue, excessive salivation/phlegm, pain, depression, sleep problems and uncontrolled outbursts.

In addition to medications, your doctor may recommend seeing different types of therapists to help with breathing exercises/evaluate if you need assistance from machines to help you breathe, physical therapy to help with mobility issues, occupational therapy to help find ways for you to remain independent, speech therapy to allow you to be able to communicate, nutritionist to help you stay healthy and psychological/social therapy to help you deal with the variety of emotions that you have regarding your disease and its progression. A key part of dealing with ALS is to allow yourself time to grieve. It is essential to remain hopeful and not solely focus on the physical limitations. A great way to cope is to join a support group. Once you have gotten beyond the stage of your initial diagnose, it is important to plan for your future medical care.

For those who have the inherited form of ALS, there is nothing you could have done that would have prevented the disease from occurring. A few other factors are unable to be changed, such as age or gender. It is more common for someone between the age of 40-60 to be diagnosed with ALS. Also, under the age of 70 it is more common in men than women. There are a few things that you can do to help prevent ALS. A big risk factor is smoking, this is especially true for women after menopause, so don’t smoke. Exposure to environmental toxins has been revealed to be linked to the development of the disease, but not any specific chemical has been identified as the main culprit. Also, serving in the military has been associated with an increased rate of ALS, but it is unclear as to why this is the case.

ALS is not something that anyone would want to have, but with research continuing there is hope for the future to not only treat but prevent it. If you have any questions or concerns about it, please speak with your doctor. If you would like more information, please visit The ALS Association at http://www.alsa.org/about-als/what-is-als.html