Why do you have one?

We have all seen on television the person being rushed to the operating room in order to have their appendix removed. You probably know that it is in your stomach and that you can live without. So, what is the purpose of the appendix? Why don’t you need one to survive? 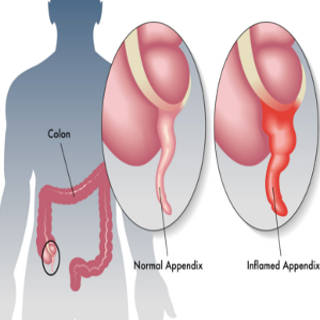 The appendix is a thin, four-inch long tube that is attached to the large intestines at the area where the small intestines connects to it. This is in the lower right area of your abdomen. The function of the appendix is unknown. Some scientists think that it is a storehouse for the “good” bacteria that resides in your large intestines (they aid in the digestion of food) and this helps to resupply the large intestines with the bacteria after a diarrheal illness. Other scientists think that it is a remnant from our evolutionary past and does not play a role in our body function nowadays.

There are two main conditions that can affect the appendix. The first is Appendicitis and is when the appendix becomes infected and inflamed. The exact cause is unknown, but thought to be related to a blockage of the opening of the appendix into the large intestines. The primary concern with appendicitis is that the appendix can become so enlarged that it actually ruptures. Usually, if you have appendicitis, you will have pain that increases in intensity in the lower, right portion of your abdomen. Sometimes, the pain starts near your belly button and shifts to the lower, right side. You could also have pain that gets worse if you cough, walk or make other jarring movements, nausea, vomiting, loss of appetite, low-grade fever that may worsen as the illness progresses, constipation or diarrhea and abdominal bloating. If you have these symptoms, you should be seen by a doctor immediately. The other possible condition that affects the appendix are tumors. The occurrence of this is rare. The two main types are carcinoid (secrete chemicals that cause the bowel to have periodic episodes of flushing causing diarrhea) and epithelial (growths in the appendix that can be benign or malignant). 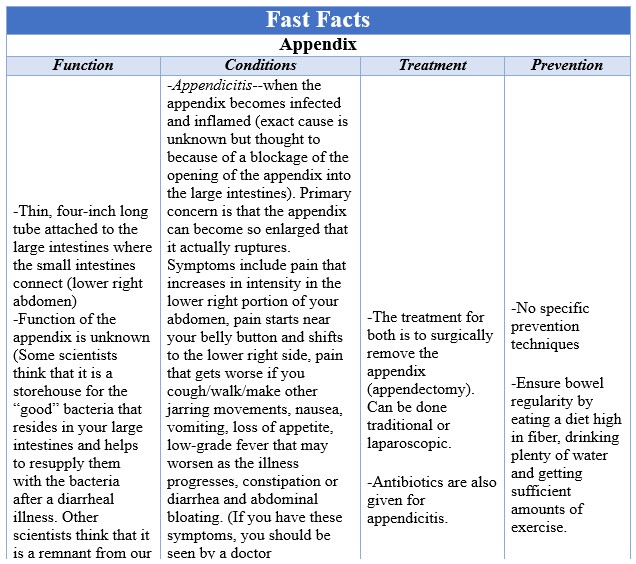 The treatment for appendix tumors or appendicitis is to surgically remove the appendix (appendectomy). You do not need your appendix to survive and unlike some other organs when they are removed, the long-term impact is minimal. The surgery can be done traditional (opening up the abdominal cavity) or laparoscopic. It is important to catch appendicitis before the appendix ruptures because if not, all of the bacteria inside is released into your entire abdomen and, most likely, requires traditional surgery to remove it. In addition to surgery, you will be given powerful antibiotics through your vein via an IV (intravenous) catheter. This will help decrease the spread of the infection, but antibiotics are not used by themselves as a treatment because they have been proven not to be effective enough on their own.

There are no specific prevention techniques to ensure that you don’t end up with appendix tumors or appendicitis. The general recommendation for overall good bowel health is to eat a diet high in fiber. This helps to keep your bowels functioning regularly and reduces the likelihood of constipation. Drinking plenty of water is important to helping keeping your bowels regular and decrease any straining when trying to go to the bathroom. Another good habit is to get sufficient amounts of exercise. This too helps with bowel regularity.

Your appendix is a mysterious organ and usually nothing to think or worry about. If you do have any questions or concerns, please speak with your doctor. If you would like more information about your appendix, please visit WebMD’s appendix page at https://www.webmd.com/digestive-disorders/picture-of-the-appendix