What does it do?

You’ve probably know that you have a gallbladder but what does it do? Why is it important and why can you live without it if you need to? For a small organ, it can cause a significant amount of problems if something is wrong with it. 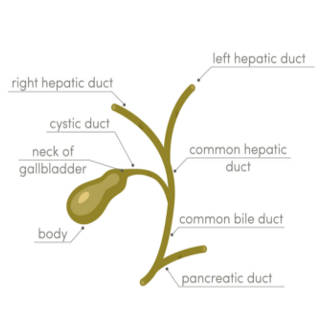 The gallbladder is a small pouch that sits just under the liver and stores bile that is produced by the liver. Before meals, it is full of bile and about the size of a small pear. When the stomach signals that it has food in it, the gallbladder empties the bile into the beginning of the small intestines via small tubes (ducts). After it empties, it is flat and resembles a deflated balloon. The bile is essential to digesting the fats that we eat, but the gallbladder is not vital to our ability to do this. If it is removed, the bile would drip slowly from the liver via the ducts into the small intestines as it is produced rather than one larger discharge when food is present. The only thing to consider is related to diet and not having meals that contain a considerable amount of fat. There are several illnesses that can occur with the gallbladder, such as gallstones, cholecystitis, biliary colic, gallstone pancreatitis, cancer, porcelain gallbladder and gallbladder polyps.

• Gallstones are caused by substances in the bile that crystallize and can be as small as a grain of sand to the size of a golf ball. They are common and harmless unless they block a duct.
• Cholecystitis is an infection of the gallbladder that is typically caused by gallstones being present and blocking a duct causing inflammation.
• Biliary colic is the term for intermittent pain in the right upper abdomen from contraction of the gallbladder as it tries to get rid of a gallstone or sludge that is blocking one of the ducts.
• Gallstone pancreatitis is when a gallstone blocks the duct that drains the pancreas causing inflammation to it. This is a serious medical condition and needs to be treated immediately because the pancreas is what helps regulate our blood glucose (sugar) levels and is vital to our survival.
• Gallbladder cancer is rare and difficult to diagnose because the symptoms often resemble that of gallstones. Often it isn’t found until it is in late stages.
• Porcelain gallbladder is when the gallbladder itself becomes calcified and unable to function. It is unclear the exact cause but thought to be related to gallstones causing chronic cholecystitis. It puts you at an increased risk for cancer.
• Gallbladder polyps are growths that protrude from the lining of the interior of the gallbladder. Typically, if they are smaller (less than a half inch), the polyps are benign (non-cancerous), which accounts for the majority of them. 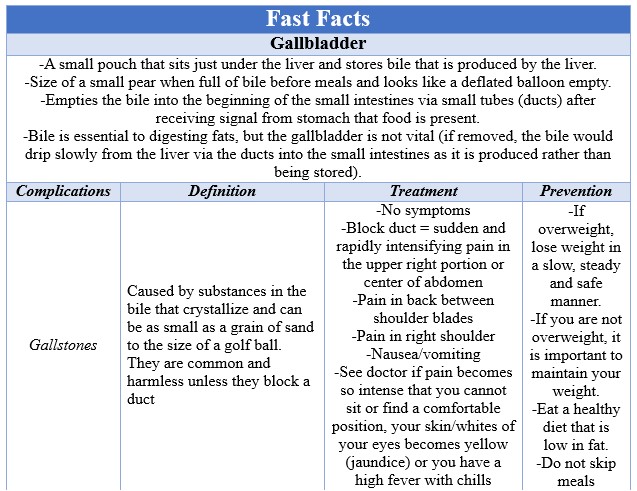 The treatment for the different conditions varies slightly. Gallstones usually do not have any symptoms unless they block a duct, which results in a sudden and rapidly intensifying pain in the upper right portion or center of your abdomen, pain in your back between your shoulder blades, pain in your right shoulder and nausea/vomiting. You should see a doctor if this pain becomes so intense that you cannot sit or find a comfortable position, your skin/whites of your eyes becomes yellow (jaundice) or you have a high fever with chills. If you don’t have any symptoms with your gallstones, then you don’t need to do anything. If you have symptoms and they are severe or reoccur frequently, then your doctor will recommend surgery to remove your gallbladder. There are medications that can dissolve the gallstones but they can take a long time to do so and the gallstones return once you stop taking the medication. Cholecystitis causes severe pain in the right upper abdomen with radiation to your right shoulder or back, tenderness when your abdomen is touched, nausea/vomiting and fever. These will most likely occur after a meal, especially if it was large or high in fat content. Treatment includes hospitalization to receive intravenous (IV) antibiotics to reduce the infection and pain medication. Also, you will not be allowed to eat or drink anything until your pain is better. Once the inflammation has decreased, your doctor will probably recommend having your gallbladder surgically removed. Gallstone pancreatitis has similar symptoms to gallstones, but the pain may also be felt in your left upper abdomen or your left back. It is a sharp/squeezing pain that comes on suddenly and is severe. Often it associated with nausea and vomiting. The treatment is similar to cholecystitis but requires emergency removal of the gallbladder and gallstone in order to reopen the duct from the pancreas to the small intestines. All of the other conditions are best managed through management of gallstones and prevention.

Since the majority of the gallbladder illnesses are caused by gallstones, it is important to prevent them or prevent them from becoming large enough that they cause a blockage. One of the biggest contributing factors to developing gallstones is being overweight. This is because those who are overweight typically consume more fat in their diets than those who are not. If you consume more fat, your liver needs to produce increased amounts of bile. Since the gallbladder’s job is to keep bile stored until it is needed to digest fats, this allows the possibility of gallstones forming to be higher. This is why it is important if you are overweight to lose weight in a slow, steady and safe manner. If you are not overweight, it is important to maintain your weight. Both of these can be accomplished by eating a healthy diet that is low in fat. It is essential to not skip meals and to have several smaller meals throughout the day rather than fewer, larger meals.