A diet fad that has become popular in recent years is eating gluten-free products. Some people swear by it. Others don’t see the benefit. What is gluten? Why are some individuals avoiding it? Should you be too? 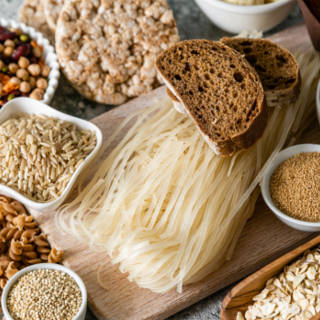 A diet fad that has caught on in recent years is going gluten-free. Unfortunately, people are doing this with little to no evidence other than testimonials in the media from professional athletes and movie stars. The claimed benefits are improved health, weight loss, and increased energy. Physical symptoms that people are said to experience include a reduction in bloating, diarrhea/constipation, gas, and fatigue. In 2014, the Consumer Reports National Research Center did a survey that found 63% of Americans believe that a gluten-free diet could improve their mental or physical health. A 2015 Gallup poll discovered that 20% of people reduce or eliminate gluten from their diet. The data shows that women are more likely than men to avoid gluten, and the diet is more prevalent among 20- to 39-year-olds.

A gluten-free diet means that the person avoids food containing gluten. Gluten is a protein found in wheat, barley, rye, spelt, and triticale (a cross between wheat and rye). Its name comes from the Latin word for “glue” because it’s what gives flour a sticky consistency when mixed with water. It’s important to note that gluten provides no essential nutrients. A gluten-free diet is crucial for those who have celiac disease or other medical conditions associated with gluten.

Celiac disease affects up to 1% of the population (or 2 million people). It’s an autoimmune condition in which gluten triggers the immune system to attack the lining of the small intestine. Over time this damage prevents the absorption of nutrients from food. Symptoms include sharp stomach pain, diarrhea, constipation, skin rashes, stomach discomfort, bloating, and weight loss. Some people don’t have digestive symptoms. Instead, they may experience fatigue, depression, and anemia. Since blood tests, genetic testing, or biopsies of the small intestine have allowed for easy diagnosis of the condition., awareness of the disease has increased. In recent years, the number of cases of celiac disease has remained stable, but the number of people following a gluten-free diet tripled, from 0.5% of the population to nearly 2%.

Non-celiac gluten sensitivity is believed to affect 0.5–13% of people. Since there’s wide variability in the numbers, there’s also thought to be an increasing number of self-diagnosed gluten sensitivity. Individuals with the condition don’t test positive for celiac disease or a wheat allergy but still feel uncomfortable after eating gluten. Symptoms are similar to celiac disease and include stomach pain, bloating, changes in bowel motions, tiredness, headache, and eczema. It’s important to note that there’s no damage to the tissues of the small intestine. Studies show that the immune system plays a role, but the process isn’t well understood.

A wheat allergy is like any other food allergy. It results in the immune system mistaking gluten or some other protein found in wheat as a disease-causing agent and creates an antibody to the protein, prompting an immune system response that may result in congestion, breathing difficulties, and other symptoms. Gluten ataxia is an autoimmune disorder that affects specific nerve tissues and causes muscle control and voluntary muscle movement problems.

Gluten-free diets aren’t easy to follow because it’s found in many common ingredients added to foods as a thickening or binding agent, flavoring, or coloring. Not only do you need to avoid traditional breads, cereals, pasta, pizza, and beer, you have to check other products, such as frozen vegetables in sauces, soy sauce, vitamin and mineral supplements, some medications, and toothpaste. When it comes to flour, all of the following have gluten: enriched flour with added vitamins and minerals, farina (milled wheat usually used in hot cereals), graham flour (a course whole-wheat flour), self-rising flour (also called phosphate flour), and semolina (the part of milled wheat used in pasta and couscous). Oats are naturally gluten-free but are often contaminated with gluten, as they might be processed in the same factory as wheat-based foods. Oats and oat products labeled gluten-free haven’t been cross-contaminated. Some foods you should avoid unless they’re labeled as gluten-free or made with corn, rice, soy, or other gluten-free grain. These include beer/ale/porter/stout, bread, bulgur wheat, cakes, candies, cereals, communion wafers, cookies, crackers, croutons, French fries, gravies, imitation meat/seafood, malt/malt flavoring/other malt products, matzo, pasta, pies, processed meats/lunchmeats, salad dressings, sauces (including soy sauce), seasoned rice mixes, seasoned snack foods (ex. potato and tortilla chips), self-basting poultry, soups/bouillon/soup mixes, and vegetables in sauce.

The easiest way to avoid gluten is to eat unprocessed, single-ingredient foods. In fact, many naturally gluten-free foods can be a part of a healthy diet. This can include fruits/vegetables, beans/seeds/legumes/nuts in unprocessed forms, eggs, lean/non-processed meats/fish/poultry, and most low-fat dairy products. When it comes to grains, starches, or flours, there are some options you can pick. Look for amaranth, arrowroot, buckwheat, corn (ex. cornmeal, grits, and polenta labeled gluten-free), flax, gluten-free flours (ex. rice, soy, corn, potato, and bean flours), hominy, millet, quinoa, rice (including wild rice), sorghum, soy, tapioca (cassava root), and teff. Also, spreads, oils, herbs, and spices are usually gluten-free. In addition, most beverages are free of gluten as well.

Despite its popularity, there’s no compelling evidence that a gluten-free diet will improve health or prevent disease if you don’t have celiac disease or some other condition affecting your body’s ability to process gluten. More research is needed. Many experts point out that it’s not unusual to lose weight when you start following a gluten-free diet because it eliminates highly processed, junk foods that add unwanted calories to a person’s diet. Usually, these foods are replaced by fruit, vegetables, and lean proteins. Other experts point out that gluten sensitivity may not be the whole story. Wheat contains not only gluten but carbohydrates, which, when poorly absorbed, can make you gassy. By limiting these carbohydrates, people tend to feel better.

The concept of people using gluten-free diets to lose weight also needs further examination. According to the Celiac Disease Foundation, gluten-free diets may actually result in weight gain. This is true even for those with celiac disease. Several studies have found an increase in weight and obesity among those who follow a gluten-free diet. This is because gluten-free foods are often higher in sugar, fat, and calories than the products they’re replacing.

Some studies, including one published in Gastroenterology in 2013, state that a gluten-free diet has no health benefits for people who don’t have celiac disease. In fact, you may be harming your health because you’re missing out on essential vitamins and minerals. Gluten-free diets are typically deficient in fiber, iron, calcium, vitamin B12, folate, zinc, and vitamins A, D, E, and K. Since gluten-free diets eliminate many sources of fiber, constipation is often a side effect. Given that the average American diet is low in fiber already, when you take away whole wheat, the problem worsens. Many gluten-free versions of foods aren’t fortified vitamins. Fortified bread and cereals are a significant source of B vitamins; therefore, people on a gluten-free diet may be at risk of deficiency. This is why it’s essential to read labels, not only for gluten content but for overall nutrient levels of fat, sugar, salt, and calories. On a side note, to prevent nutritional deficiencies, parents shouldn’t place children on a gluten-free diet without a medical reason.

When it comes to following a gluten-free diet at home, there are steps you can take to prevent cross-contamination. Besides looking at food labels to identify gluten-free foods, you should buy a gluten-free cookbook. This can help you plan your diet around plenty of whole, single-ingredient foods. It’s key to use separate cooking utensils, especially if you share a kitchen with friends or family members. Be sure to store gluten-free and gluten-containing foods in different places. Ensure cooking surfaces and food storage areas are clean. Wash dishes and cooking equipment thoroughly after every use. You should also consider toasting bread in the oven or using a separate toaster. If you’re visiting family, take gluten-free foods with you.

If you’re following a gluten-free diet, it can make it difficult to socialize. This is why it’s important to tell your friends because they’re more likely to choose restaurants with gluten-free options. The good news is that many restaurants have gluten-free options. However, there’s still a risk of food being contaminated with traces of gluten. If possible, read menus online ahead of time and call ahead to make sure the chef knows how to prepare gluten-free meals. You can also carry an index card that explains what you can and cannot eat and give it to your server, who can relay information to the chef. Also, try to eat early or late when a restaurant is less busy and better able to address your needs. Try bringing your own bread or crackers with you. If you’re traveling abroad, make sure you research places to eat and shop for food before going.

A gluten-free diet doesn’t seem to be all that people claim it to be (at least based on current research). However, if you decide to go down that path, do it the healthy way by consulting a registered dietician to ensure you’re not missing essential vitamins and minerals. If gluten-free doesn’t sound like the way to go for you, focus on eliminating highly processed foods and eating more fruits, vegetables, and lean proteins. Either way, your goal is to get your body to a healthier spot than it currently is.