Why is it so important?

Take a moment and think about a time when you were having a bad day. Everything seemed to be going wrong. You tell a friend that you’re having lunch with about it. While listening, she not only sympathizes but pats your arm, and before you part ways, she gives a big hug. How did you feel afterward? You probably felt at least a little bit better. The power of human touch is significant. Why do we need it? How can you incorporate more of it into your life? 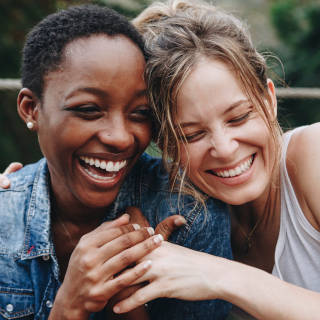 Human beings are wired to be touched. It’s one of our most basic, primal needs. It’s how we bond, beginning at birth and keeping up throughout our lives. Skin-to-skin contact in the first hour after birth has been shown to help regulate newborns’ temperature, heart rate, and breathing and decreases crying. The research demonstrating the need for human touch is vast. However, it really came to light in the mid-1990s when scientists examined the sensory deprivation of children in understaffed Romania orphanages. They found that the children had strikingly lower cortisol and growth development levels for their age. Other studies demonstrated that children who grow up without affective touch have severe developmental issues and are unable to relate socially. New studies on touch continue to show the importance of physical contact in early development, communication, personal relationships, and fighting disease.

What are the benefits of touch?

The correlation between anxiety, depression, and stress, and touch is significant. Every medical disease, like heart attack, diabetes, hypertension, and asthma, is altered if you are more anxious, depressed, or stressed. When you’re stressed, the body releases the hormone cortisol. Touch helps reduce stress because it helps to lower your cortisol level because it slows down your heart rate and blood pressure. It does so by stimulating pressure receptors that transport signals to the vagus nerve. This nerve connects the brain to the rest of the body and uses signals to slow the pace of the nervous system. Touch also causes an increase in serotonin, which is the body’s natural antidepressant and anti-pain chemical. It triggers the release of oxytocin, a hormone known for promoting emotional bonding to others. Numerous studies show that touch signals safety and trust. Research shows that a reassuring hug benefits both the receiver and the giver meaning both people involved in the interaction experience more positive emotions and feel more strongly connected.

According to one 2017 study, gentle touch can reduce both pain and feelings of social exclusion. Studies using imaging scans have found that the brain quiets in response to stress and pain when a person’s hand is held. The effect is greatest when the hand being held is that of a loved one, but it still works even if it’s just a stranger. In either case, it’s communicating support and empathy. One 2017 study from the journal Scientific Reports indicated that if two partners touch and one of them has mild pain, it diminishes the sensation of pain. Another study featured in the journal PNAS observed the same effect in groups of young couples when they were holding hands. Other studies show that touching patients with Alzheimer’s disease can have huge impacts on getting them to relax, make emotional connections with others, and reduce their symptoms of depression.

Touch helps regulate our digestion and sleep and even boosts our immune systems. One 2014 study in Psychological Science proposed that the stress buffer provided by hugs has a protective effect against respiratory infections. Among the people involved in the study, those who did become ill and received emotional support in the form of touches showed less severe symptoms of illness.

Scientists have realized that touch has valuable therapeutic potential, and some people might benefit from receiving a reassuring pat on the shoulder when they are feeling down. A series of studies performed by Dutch researchers demonstrated that hugging could relieve a person’s feelings of existential fear and remove self-doubt. A different study from Sweden found that embracing and patting children in distress has a soothing effect. The interaction involves the adult offering gentle contact and the child having a positive response to it. The exchange allows the child to regain a sense of security and reassurance. We seek to receive and give hugs to people we love precisely because they trigger a neural pattern of comfort and affection. A 2012 study implies that people whose parents were regular huggers were more likely to hug people in adulthood.

Why aren’t we getting enough touch?

Although the therapeutic benefits have become increasingly apparent, we’re touching each less than ever. There are many reasons for this change. One is cultural differences because touch is viewed as a violation of personal space in some, including in the United States. Scientists who study animal behavior (ethologists) point out that nonhuman primates spend about 10 – 20% of their waking day grooming each other. If you go to other countries, people spend a lot of time in direct physical contact with one another. In the 1960s, pioneering psychologist Sidney Jourard studied the conversations of friends in different parts of the world as they sat in a café together. The results showed that in England, the two friends touched each other zero times, whereas, in the United States, they touched each other twice. However, in France, the number was 110 times per hour, and in Puerto Rico, it was 180 times! More current issues are no-touch policies in schools and the isolating effects of cell phones and computers. Social media has been really detrimental. Being on your phone is distancing people physically from each other; certainly, kids are much more touch-deprived than before smartphones.

What happens when you don’t get enough touch?

Touch starvation (touch deprivation or skin hunger) is the name for what happens when you don’t get much physical touch. Studies from 2014 discovered that missing out on regular human contact has severe and long-lasting effects, such as stress, anxiety, depression, and immune system disorders. The opposite of all the positive benefits touch can provide. Long-term touch starvation could even trigger post-traumatic stress disorder (PTSD). Also, an increasing amount of data shows a direct relationship between aggressiveness and touch deprivation.

How do you know if you’re touch starved?

While there’s no definitive way to know, you may feel overwhelmingly lonely or deprived of affection. Other symptoms could be feelings of depression, anxiety, stress, low relationship satisfaction, difficulty sleeping, and a tendency to avoid secure attachments. Another sign is that you subconsciously do things to simulate touch, like taking long, hot baths/showers, wrapping up in blankets, or holding on to a pet.

What can you do to increase the amount of touch in your life?

Since touch is so important, you’re probably wondering how to get more of it into your life. Research indicates that one of the most effective ways to benefit from the therapeutic benefits of touch is through massage. According to studies, massage increases natural killer cells in your body. Natural killer cells are the front lines of the immune system because they can get rid of viruses and bacteria. Scientists think that the reason that happens is because massage drops cortisol levels. This is vital since cortisol destroys natural killer cells. So, it’s not just good for your muscles; it’s good for your entire physical and mental health. Whether you ask a loved one or visit a professional, massages can help you relax and enjoy the benefits.

If massage therapy is not your thing, don’t worry, there are other options. Maybe getting your hair done, a manicure/pedicure, or another type of spa treatment is more your speed. Spend quality time with your pets. Studies show that spending time petting them mimics some of the benefits of human touch. You could also learn to dance. Most slow dances are built around skin-to-skin contact. Since holding hands, hugging, and cuddling are pretty good ways to get touch, there are things you can do to encourage this. Instead of spreading out on the couch, try to cuddle up to your loved ones. Let children be close to you as often as possible. Another option is to greet household members with a hug. In platonic relationships, you can reassure people with a touch to the arm or a pat on the back. Just make sure that other people are comfortable before going ahead. If you don’t have any close relationships, you can go to a cuddle party. Yes, these are a real thing and aren’t as strange as they sound.

What about social distancing?

As a result of the COVID-19 pandemic, platonic physical touch among friends and colleagues has gone by the wayside due to social distancing. So, in a time when we need the reassurance of touch the most, it’s not acceptable, leading to many feeling touch deprived. However, there are ways to fight the effects of touch starvation, even when you can’t physically interact with others. According to research, video chatting is about 80% as effective as in-person contact. This is good news because you can use it to connect with friends. One creative idea is to host an online dinner where you can all see each other but are in your own homes. Another option is to connect via text and email. While this isn’t as effective as video chatting, it’s better than nothing. Just be sure to use lots of emojis or pictures that emphasize physical touch, like thumbs-up or waving hands. When out in your yard, wave to or talk to your neighbors. Studies have found that even touching an inanimate object, like a stuffed animal, can soothe existential fears.

Being touch starved is like being starved for food. You want to eat but can’t. Your psyche and body want to touch someone but can’t. While food may be necessary for survival, touch is what sustains us. Any and all positive touch is considered beneficial. So, it’s vital to find ways to include it in your life!